Remember the family of Utah Raptors that arrived in a 9-ton ‘block’ in Salt Lake City a few months ago? Our Paleontologists here at the UGS have been working very closely on this project for years. Check out this wonderful highlight on their work so far, where you can see interviews from Utah State Paleontologist James Kirkland, and Paleontologists, Don DeBlieux and Scott Madsen.

A nine-ton block of sandstone that was pulled from a Utah mountain late last year holds the biggest fossil trove ever found of the giant predatory dinosaur known as Utahraptor. Covered in feathers, with a huge sickle claw on each second toe, Utahraptor looked like a pumped-up version of the Jurassic Park star Velociraptor.

And further reading in this article below…

Reports of what looked like a human arm brought Utah state paleontologist James Kirkland to a particular sandstone hill in 2001. But it turned out that his graduate student had actually found something entirely different — a veritable mass grave of Utahraptor dinosaurs. Now they’ve found the remains of six individual dinosaurs, and there may still be more inside of the 9-ton sandstone block they’re excavating. 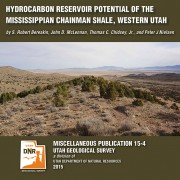 PUMPING TOO MUCH WATER IS SINKING CEDAR VALLEY