UGS paleontologists Jim Kirkland and Don DeBlieux spent last week assisting a crew from Utah State Parks and the Escalante Petrified Forest State Park in moving a large petrified tree to the park for display. The park received permission from the Bureau of Land Management (BLM) to move the tree from land they manage just outside the town of Escalante, and they called in UGS paleontologists to consult with and oversee the move. Several pieces of heavy equipment were needed to lift the log, which was already separated into sections, onto a flatbed truck for the several-mile drive to the park. Eighteen sections were moved, including the base of the tree that was estimated to weigh over 2 tons, and lifted back into place in the sand-filled concrete enclosure that had been constructed to house the tree. The park is known for its large number of petrified logs eroding out of the 150-million-year-old Morrison Formation rocks. These logs are found on a plateau above the park entrance that can only be accessed by a fairly rugged hike, so not all visitors will have the time or the ability to see them. By having a large tree on display near the visitors center, many more people, including those with physical challenges, will be able to view and learn about the fossils found in this region. The cooperation of the BLM and State Parks for the benefit of Utah citizens and visitors was well exemplified during this project. 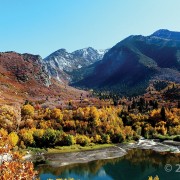 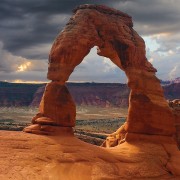