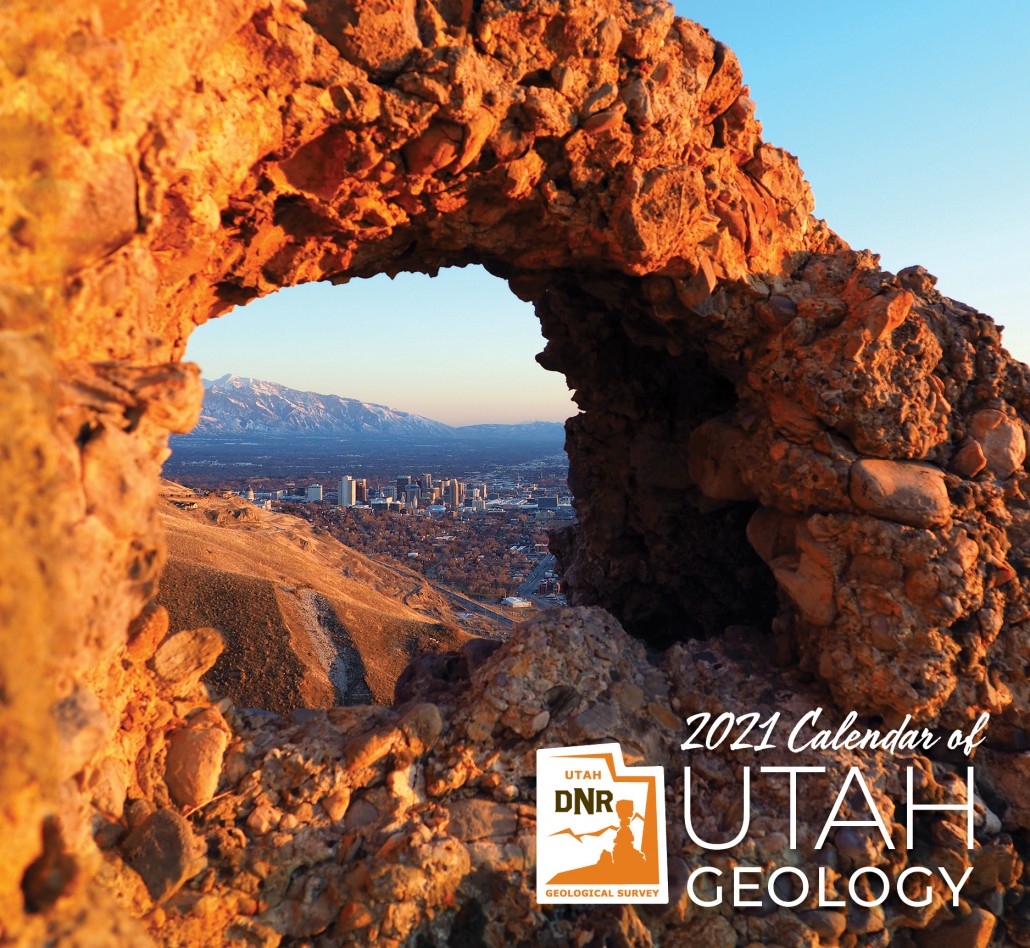 Shop for the Calendar

PRESS RELEASE: Utah Geological Survey Launches 2021 Calendar of Utah Geology – Inspiration for Exploration is Everywhere When You Live, Work, and Play in Utah 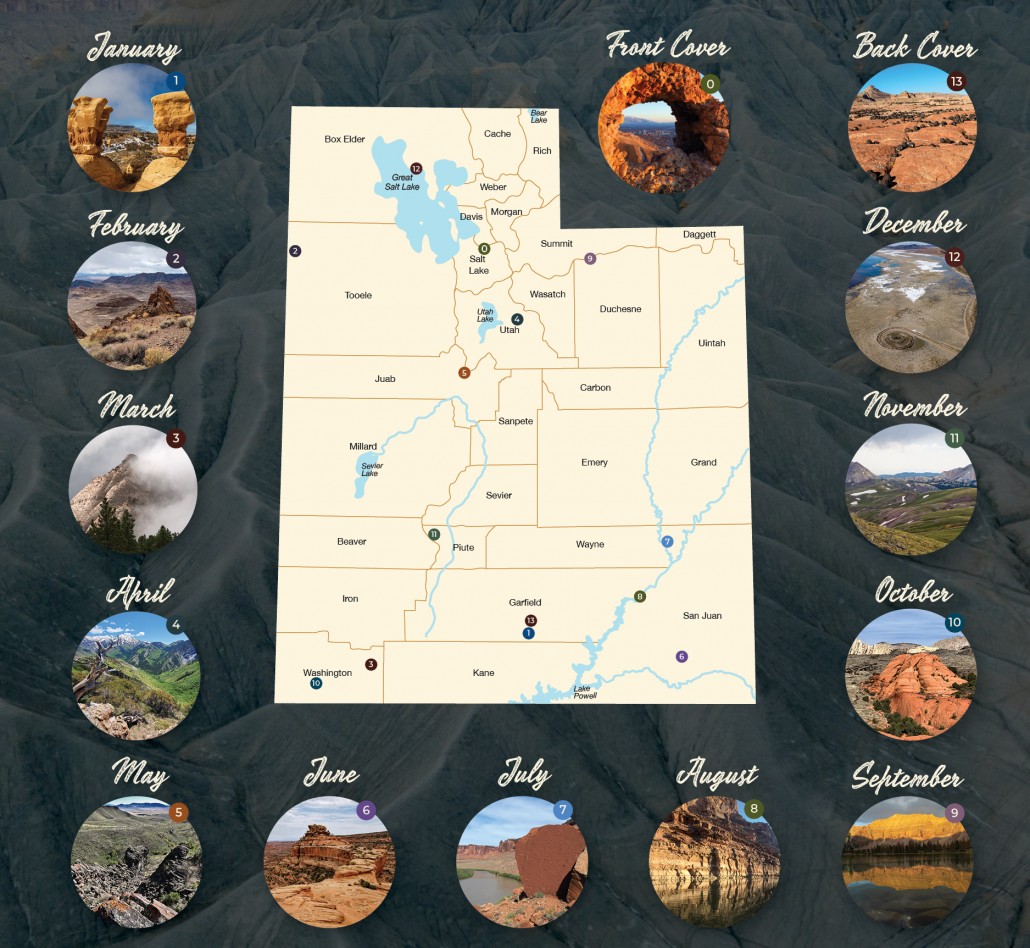 Salt Lake City (November 16, 2020) – The Utah Geological Survey (UGS) recently released the 15th edition of its popular Calendar of Utah Geology. The photographs often focus on remote locations found by UGS scientists working in the field, and this year’s calendar has plenty of remote and isolated scenery.

When you live, work, and recreate in Utah, scenic vistas and geologic wonderment can be found in the most unexpected places all across the state, even the foothills of Salt Lake City where little known “industrial arch” is located.

“I had been exploring the trails behind my house for nearly 20 years before finding industrial arch,” said UGS geologist Mark Milligan, about this year’s cover photo. “There are fossils, multiple hot springs, recent landslides, and amazing mountain and lake vistas, all within walking distance. But an arch? Turns out there are at least two small but picturesque arches out my back door.”

Mark does not live in one of Utah’s many picturesque rural towns but two blocks from the Utah State Capitol in the heart of downtown Salt Lake City. He photographed the arch as part of a work assignment.

Conversely, UGS wetland ecologist Diane Menuz captured a rugged and beautiful scenic image from midway up Volcano Peak in a remote and rarely visited part of Tooele County. Like many of her coworkers, Diane’s fieldwork demands she travel to remote places, but it was a desire for isolated recreation during the pandemic that led her and her family to camp in Utah’s west desert.

“The solitude was great but we were not alone. A stubborn bighorn sheep would not move aside and prevented me from summiting the peak,” she said. At least she got the calendar photograph for her effort. 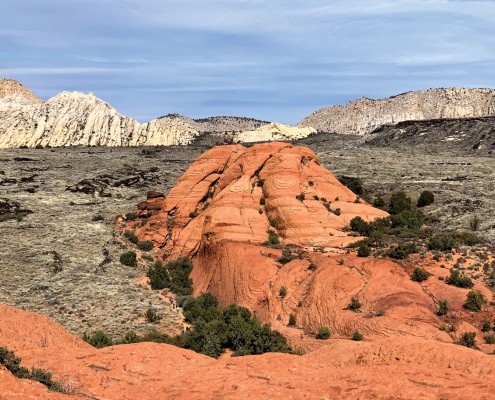 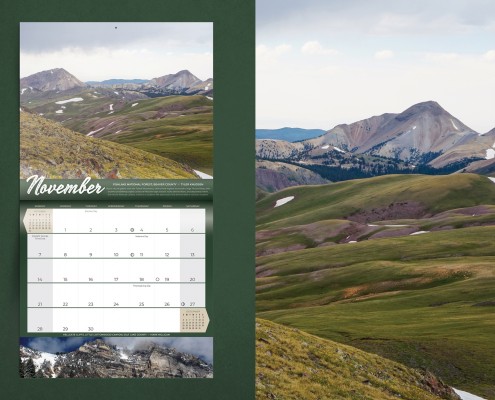 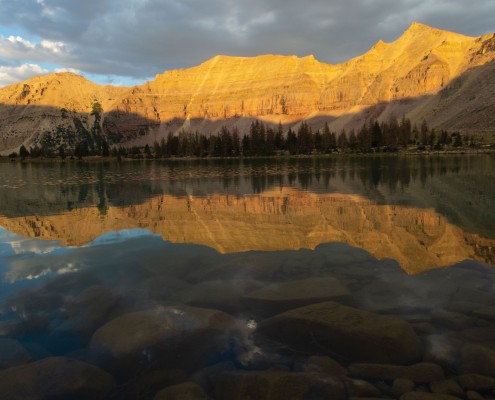 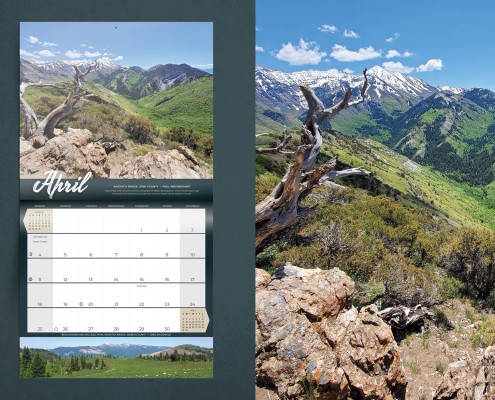 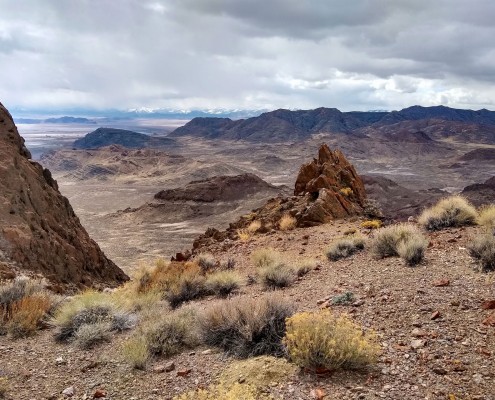 The UGS first published the Calendar of Utah Geology in 2007 and has included over 500 photos from national parks, state parks, urban outskirts, scores of little known remote locations, and every Utah county. All photos have had a geologic theme and an eye to Utah’s natural beauty. The 2021 calendar continues the concept, featuring inspiring photographs by UGS staff of Utah’s geologic wonders with a brief explanation of how and when they formed.

Notably lacking in every photo, people. There is arguably no better state to get out and spread out in than Utah. We have perhaps the most geologically diverse and beautiful backyard, whether that is taken to mean the entire state or directly out one’s own back door, even in our capital city. The 2021 Calendar of Utah Geology provides inspiration for exploration.

Improve on Our Geologic Map of Utah
Scroll to top