Gandy Salt Marsh, Millard County
Photographer: Rich Emerson © 2017
With the Deep Creek Mountains on the horizon, lush vegetation thrives in spring-fed wetlands that create an oasis in the middle of arid Snake Valley. Hundreds of springs and seeps in the valley provide habitat for many unique species of plants and animals. 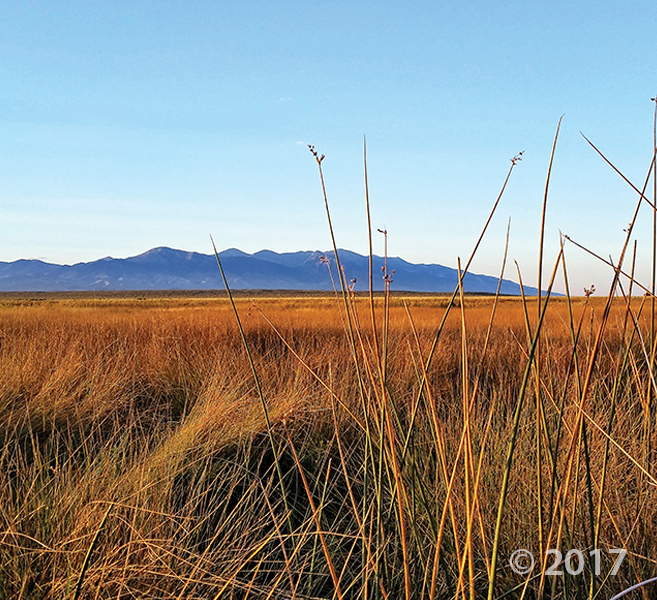 “The time and resources committed to this study delineates groundwater levels, flow and chemistry in Snake Valley and adjacent basins to a much greater degree than was previously possible,” said Hugh Hurlow, senior scientist for the UGS Groundwater and Paleontology Program. “With pressure to develop groundwater in west-central Utah and east-central Nevada likely to continue, we needed to understand how future development and groundwater use was going to impact Utah residents and natural resources.”

Monitoring by UGS revealed that current groundwater use in Snake Valley is slowly depleting the basin-fill aquifer. Present pumping rates will continue to lower groundwater levels and reduce spring flow.

The study also shows future water development and increased pumping in Nevada or Utah would significantly increase the rate and area of groundwater level decline. Additional pumping for local agriculture use, or export from the area would harm springs and shallow groundwater that supports habitat of sensitive-species and vegetation used for grazing.

Additionally, researchers found that shallow basin-fill and deep carbonate-rock aquifers are interconnected. Increased pumping could also cause drawdown from both, which in turn could impact valleys beyond Snake Valley.

“Groundwater pumping would affect environmental conditions and current and future groundwater use in Snake Valley,” Hurlow said. “Taken together, the proposals for groundwater development in the region exceed the groundwater available for development. The current ecosystem would be negatively impacted by all but small levels of additional pumping.”

The UGS study was funded by the Utah Legislature in 2007, primarily to evaluate the impacts of a proposed project by the Southern Nevada Water Authority (SNWA) to pump groundwater from several basins in east-central Nevada for use in Las Vegas. SNWA’s project includes wells in Snake Valley, within five miles of Utah.

To complete the hydrogeologic study and groundwater monitoring, UGS developed a monitoring network that includes wells at agricultural areas, springs and remote sites. In all, 76 wells record water levels hourly, and new spring-flow gages are in place at six sites. Data from the study is available on the UGS Groundwater Monitoring Data Portal. Data collection is planned to continue for the foreseeable future.

The report is available for purchase from the Utah Department of Natural Resources Map and Bookstore, 1-888-UTAHMAP, GET IT HERE. A PDF version of the report is also available on the UGS webpage.

A small team of our geologists have been working in Snake Valley to determine future effects the Southern Nevada Water Authority’s proposal to tap Snake Valley aquifers could have on ranchers and fragile desert ecosystems. Check out this Salt Lake Tribune article for more information on the matter.

For years, Snake Valley ranchers and environmentalists have complained Las Vegas’ designs on rural groundwater would wreck their livelihoods and dry up fragile desert ecosystems in Utah’s West Desert. Public land managers weighing the environmental impacts of a controversial pipeline that would tap groundwater from the Snake Valley aquifer have extended the comment deadline by a month.

Those who want to weigh in on the draft environmental impact statement analyzing the Las Vegas pipeline plan now have until Oct. 11, rather than Sept. 9, to give input.

Pressure from critics opposed to the plan or by those who simply wanted more time to read the voluminous document led to the extension.

“We appreciate the BLM being responsive to the many requests they received from organizations, elected officials and concerned citizens,” said Rob Mrowka, spokesman for the Great Basin Water Network, one of the lead critics.

The Utah Geological Survey (UGS) has made its ground-water monitoring data available to the public through its new Ground-Water Monitoring Data Portal; with just a few simple clicks you can track water level trends in wells, and flow rates from springs in Snake Valley and adjacent areas.

Or, if your interest is in landslide potential this spring, you can find out what the water levels are in wells in and near landslides along the Wasatch Front. Users can easily find wells and springs using a map interface, view graphs of the data, and download graphic or tabular data in several formats.

The UGS has made the information available, in part due to the large amount of interest in proposed water-development projects in Snake Valley in west-central Utah and east-central Nevada. The ground-water levels, which have been continuously monitored by the UGS since 2007, have declined in areas of current pumping, suggesting that use is presently at or near the maximum sustainable rate for the region and that if pumping rates increase in the future, the rate of water-level decline would likely increase.

Water watchers worried about wells in Snake Valley — the focus of a controversial plan to pump water from an aquifer that straddles the Utah-Nevada border — can with just a few clicks track water level trends out in Utah’s Great Basin region.

The Utah Geological Survey is making its ground-water monitoring data available online for Snake Valley and adjacent areas as well as the water level in wells near landslides along the Wasatch Front.

Users can find wells and springs using a map interface, view graphs of the data and even download graphic data in several formats.

Critics fear taking the water will drawn down the aquifer, jeopardizing the needs of area water users, which include ranchers and farmers in Utah.

A press release by the survey said it has made the information available in part due to a groundswell of interest in a proposed water-development project in Snake Valley, which straddles the border of western Utah and eastern Nevada.

Dean Baker, a rancher and activist for the protection of water rights in west-central Utah’s Snake Valley, could become wealthy by selling his property to the Southern Nevada Water Authority. The principal communities in the Snake Valley, from north to south, are Callao, Trout Creek, Partoun, EskDale, Baker, and Garrison.

“People don’t understand me,” Baker said, referring to his refusal to sell.

What makes Baker’s property valuable is that it is a coveted water source. But after 55 years of ranching, Baker isn’t ready to give up his home or see his agriculture and livestock suffer because of underground pumping.

According to the Great Basin Water Network, the Southern Nevada Water Authority (SNWA), the water agency for Las Vegas and Henderson, Nev., proposes to pump up to 200,000 acre-feet annually from eastern Nevada and western Utah and send it through 300 miles of pipeline to support larger cities. This comes to about 65 billion gallons of water per year.

Ecologists and hydrologists estimate the water table will drop as much as 100 feet in the first 10 years of the pipeline, killing the current vegetation and wiping out the wildlife and livelihoods of the rural communities including the Snake, Spring, Cave, Dry Lake and Delamar valleys.

A court ruling, and the inaction of Nevada lawmakers, means any agreement on Snake Valley water won’t happen until at least 2011, according to Mike Styler, executive director of the Utah Department of Natural Resources.

During a session of the Utah Water Users Workshop, Styler said the Nevada Legislature did not take significant action last month on a Nevada Supreme Court decision that called into question the rights concerning the water resource beneath areas of western Utah and eastern Nevada.
In a shared water agreement with Utah, the Southern Nevada Water Authority has proposed pumping water from the aquifer 300 miles south to satisfy the growing needs of Las Vegas.
Utah water users are concerned the proposal could have a negative impact on their water rights and air quality from dust that could result as areas become more parched.

Styler took his audience through a history of the proposed agreement that began in 1989. The Nevada court decision was significant because a lower court must now decide if Nevada state engineer Tracy Taylor “violated his statutory duty” when he failed to make a decision by 1991 on 34 applications by the Southern Nevada Water Authority for rights to water in aquifers under three Nevada valleys. A new interactive map of Snake Valley with all of the well data, has recently been added to the Utah Geological Survey (UGS) Web site.  The West Desert Ground-Water Monitoring Network is almost complete and updates are available on a newly developed Google Earth™ interactive map.  The network will monitor ground water for more than 50 years in Snake Valley, western Millard County and adjacent areas.  The $3.5 million network is a response to planned ground-water development in east-central Nevada.  The Utah Geological Survey will upload data onto its Web site.

Objectives included: assessing the potential impacts of pumping on ground water and spring flow in Utah; evaluating flow patterns in the aquifer from Snake Valley to Fish Springs National Wildlife Refuge; determining baseline water-level and chemical trends in local and regional ground-water flow systems; and, measuring the capacity of the aquifers to transmit and store ground water.