This section summarizes landslide conditions from January 20 through December 7, 2010. Precipitation for the water year is also discussed.

The landslide was active in 2010 and had been continuously moving at a very slow rate since at least January 2008. Measurements indicate that different parts of the landslide were moving at slightly different rates. In general, the landslide moved to the northwest, toward Valley View Drive. Ground deformation measurements were collected from survey markers using a steel measuring tape and a survey-grade GPS instrument, depending on location. 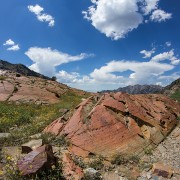 Counting down the days to the holidays!