Bob Odom is used to seeing a little bit more damage each year as a landslide carries his neighborhood a little bit further downhill. But this year the pace has slightly increased.

“It’s little bit more than normal,” Odom said, standing in a street that once was straight but is now bent and broken by a seemingly unstoppable force tearing his neighborhood apart.

The landslide typically moves at a pace of a few inches a year. This winter, geologic measurements show that it sped up a bit. Though it’s not a huge increase, it’s enough to serve as a warning of other potentially troublesome landslide activity around the state.

Geologists believe the slight speed-up is due to an unusual amount of water that entered the soil during wet weather in November and December. 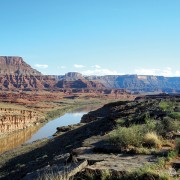 Glad You Asked—Glacial Striations and Slickensides

My Tweets
Utah Has Two Wives, and Other Interesting Geographic FactsGreat Salt Lake Connects to the Pacific Ocean in 1800?
Scroll to top