UPDATE: An update on the largest arches in the world (2012) 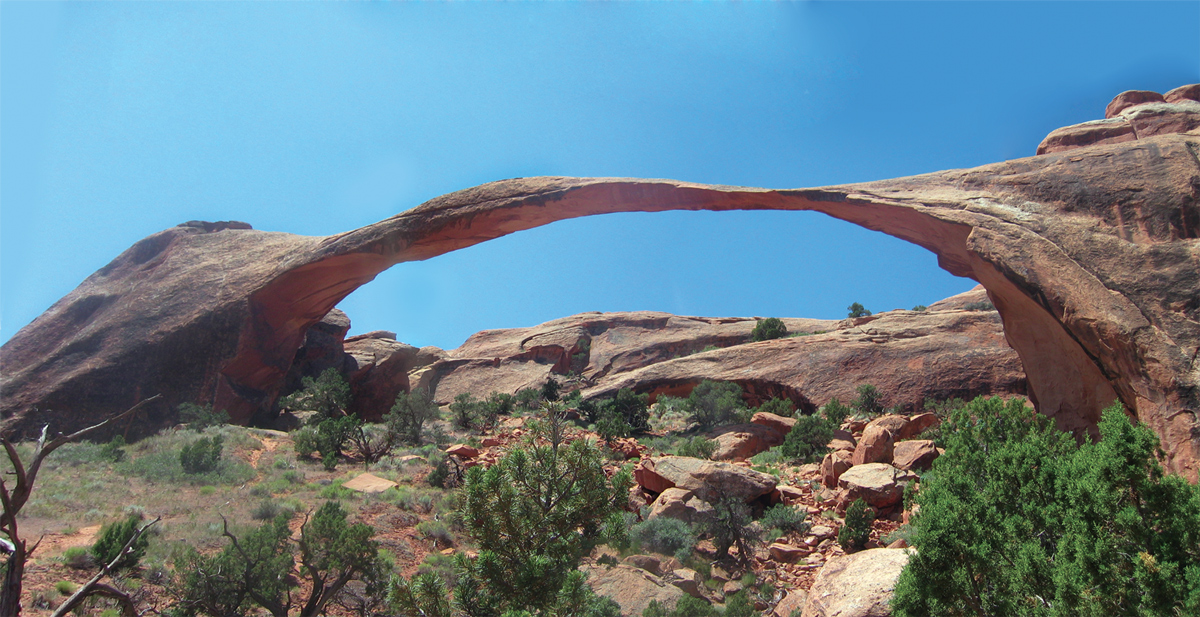 Landscape Arch in Arches National Park has a span of 290 feet, the longest of any arch in the world, and is unquestionably the most mind-boggling due to its gravity-defying ribbon of rock that in places narrows to only 7 feet in thickness. Photo by Grant Willis. 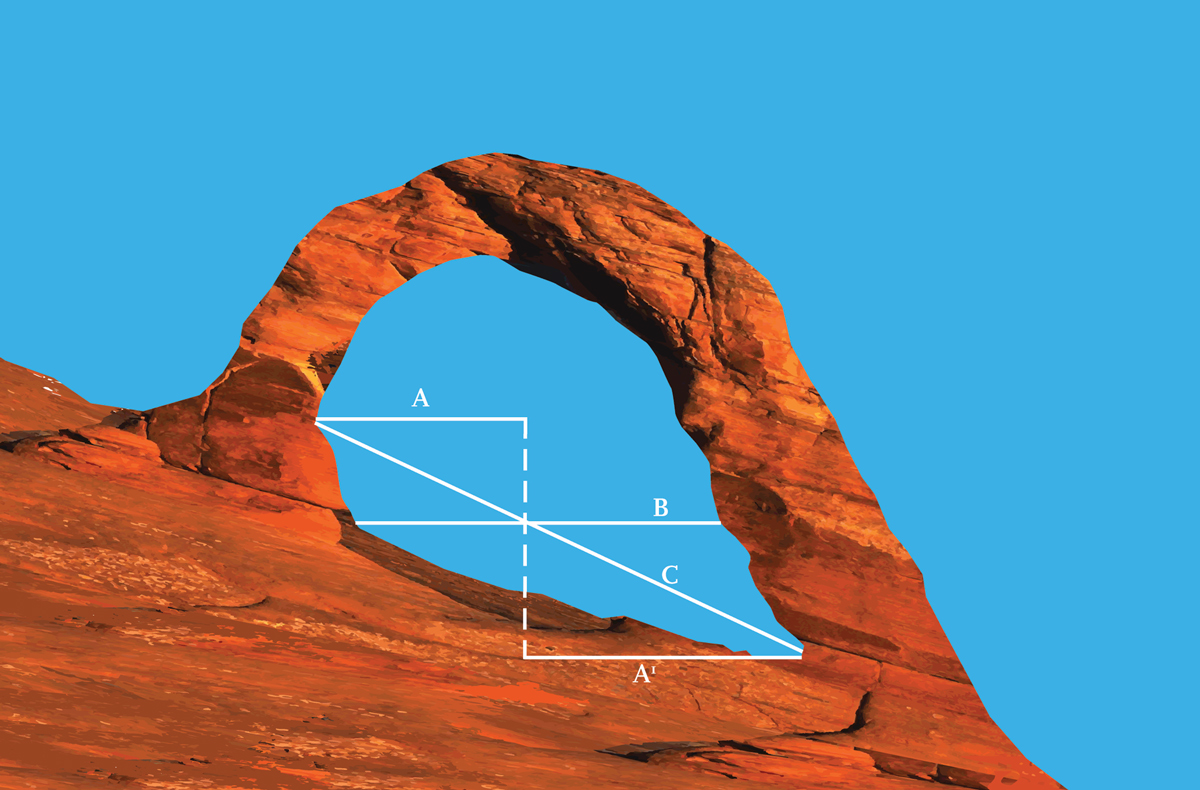 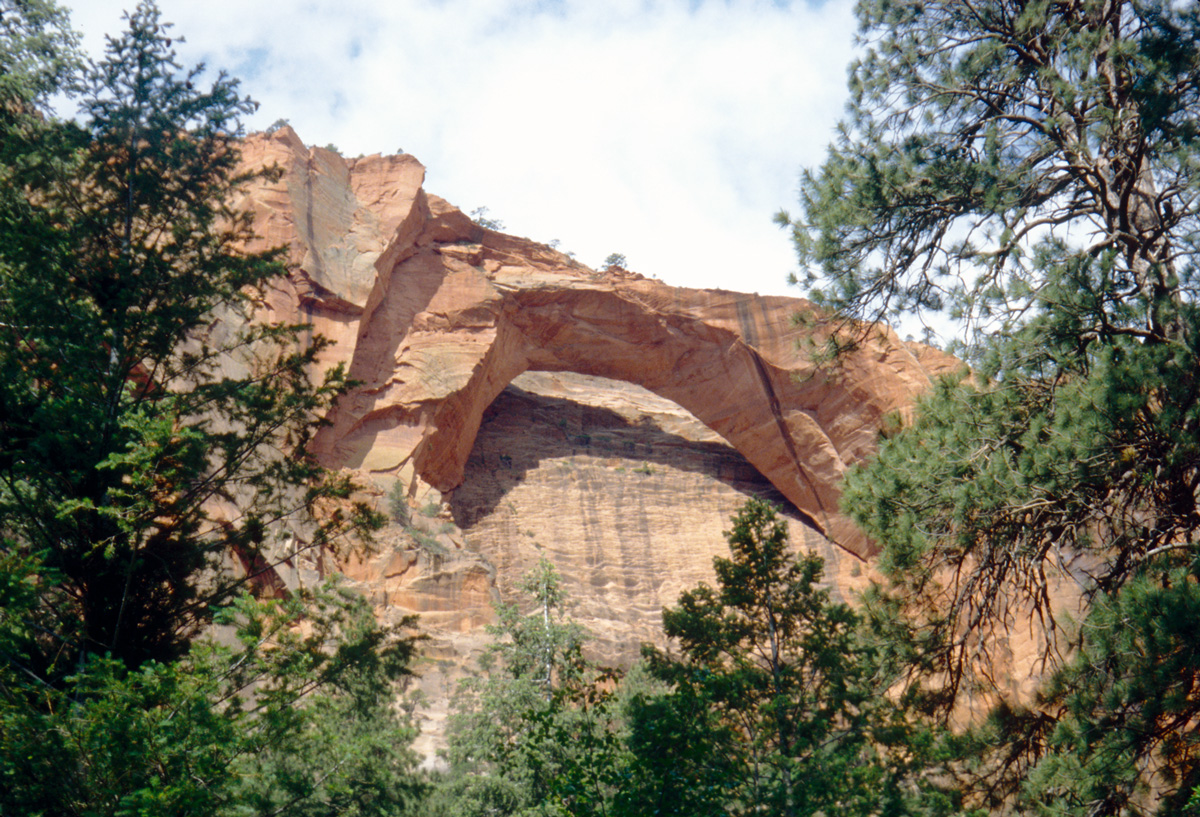 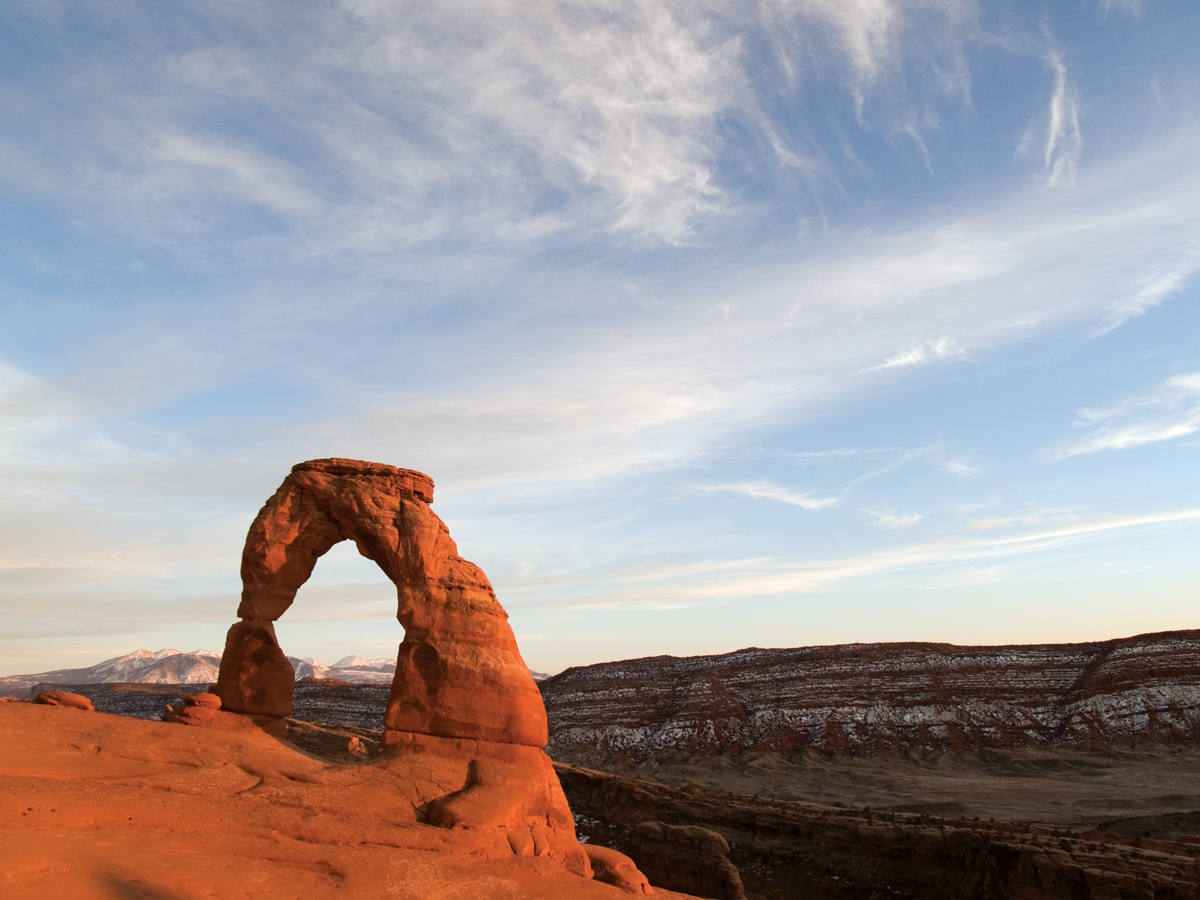 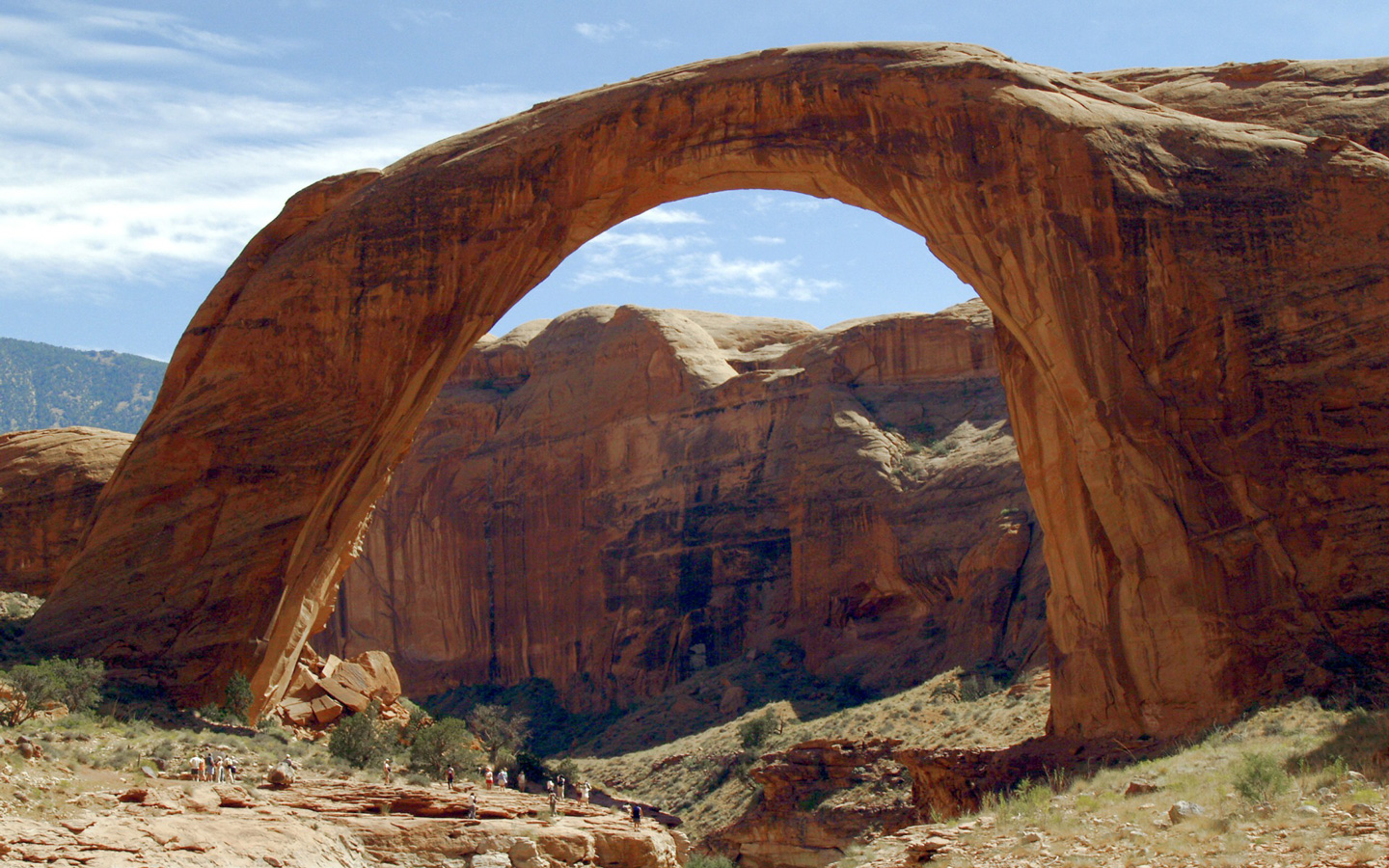 * see updated list: An update on the largest arches in the world (2012) Grant Willis has been a mapping geologist with the UGS for 26 years, including 15 years as manager of the Geologic Mapping Program. He has authored or coauthored over 40 geologic maps, and is currently mapping Glen Canyon National Recreation Area.

In nearly three decades of working in Utah geology, I have been asked many times, “What is the largest/longest/biggest arch in the world?” For years I told people it was Landscape Arch in Arches National Park. Then, about 20 years ago, a Zion National Park ranger told me that Kolob Arch is bigger. Occasionally, I would even hear someone claim that Rainbow Bridge is the biggest. But a cloud of uncertainty always hung over all of these Utah arches because of stories of a great arch in China that could eclipse them all. A National Geographic Society article in December 2000 reported on an expedition that located and photographed, but did not measure, the rumored Chinese arch called Tushuk Tash or Shiptons Arch.

Thanks to a small but dedicated organization, the Natural Arch and Bridge Society (NABS; www.naturalarches.org), the question has finally been answered. Soon after it was founded in 1988, NABS realized that it first had to answer another more difficult question—how do you define “biggest arch”? NABS invited every interested scientist, mathematician, and enthusiast it could find and set to work. NABS determined that the key dimension most people are interested in, and that can be uniformly measured in all arches, is the “span.” The formal definition is complex—in simple terms, it is the maximum total horizontal length of the arch opening (thanks to Jay Wilbur of NABS, who spent considerable time discussing the nuances of arch measurement with me).

Armed with this rigorous definition, and with high-precision laser devices, NABS began measuring spans of all likely candidates. Some were easy—Landscape Arch and Rainbow Bridge are right next to trails and have relatively simple shapes. But some are exceedingly difficult—Kolob Arch is reached only by difficult bushwhacking followed by challenging technical rope work, and has a complex shape since it is “scabbed” onto the side of a cliff. Tushuk Tash in China and Aloba Arch in Chad are both logistically and politically difficult to access. Even after reaching Tushuk Tash, unstable slopes and rock-fall hazards make getting into position to accurately measure the span unacceptably risky. NABS used triangulation on various photographs to calculate its span at about 180 ± 20 feet. However, it leans out over a deep chasm, giving it an astounding vertical drop of 1200 feet, the highest of any natural arch. Similarly, in-place measurements of Aloba Arch have not been done because the point of the maximum span is a couple of hundred feet up near-vertical walls. However, a large flat area in front of the arch allowed accurate triangulation measurements, giving it a span of about 250 feet.

It soon became clear that Landscape and Kolob Arches had the longest spans in the world by a considerable margin, but which was actually the longest? Previous measurements over the past 50 years, including some that involved rigorous methods and controls, yielded spans of 282 to 310 feet for Kolob Arch (with the best estimate of 294 feet) and 291 to 306 feet for Landscape Arch. The NABS team accurately measured Landscape in 2004, yielding a measurement of 290 feet—it looked like Kolob would be the winner.

Accurately measuring Kolob Arch was the last major hurdle. Because Landscape and Kolob were so close in span length, the NABS team knew the measurements had to be very accurate and precise, with sufficient control and redundancy to remove any room for doubt. The huge cliff and irregular shape of Kolob made the task even more difficult. In October 2006, Jay Wilbur, who did many of the high-precision measurements and calculations on several of the largest arches, led a team of climbers and experienced NABS surveyors to Kolob Arch. He noted that it was “with the full expectation that the results would finally confirm that Kolob Arch had the greater span” (www.naturalarches.org/archinfo/kolob.htm). At last, in late 2006, the results were in—Kolob Arch has a span of 287 feet. Landscape Arch is the biggest in the world by a mere 3 feet!

These two great natural wonders stand in a class by themselves. A distant third is Aloba Arch in Chad with a span of about 250 feet. Rainbow Bridge, with a span of 234 feet, was relegated to 6thposition. National Park Service brochures and many books give it an incorrect measurement of 275 feet and commonly state that it is the longest natural bridge in the world (a natural bridge is a specific type of arch that spans a waterway); however, Aloba Archis also a natural bridge and its span is about 16 feet longer and its opening is about 100 feet higher than Rainbow Bridge.

Only 10 natural arches in the world have measured spans that exceed 200 feet; the Colorado Plateau has nine of these, with six in Utah. Utah also has half a dozen or more arches with spans that exceed 150 feet, several dozen that exceed 100 feet, and probably several hundred with spans exceeding 50 feet. In fact, Utah has several times more large arches than any other state.

Utah also has one fallen arch that may have dwarfed all modern arches—Fallen Monarch in Natural Bridges National Monument, which likely fell just a few hundred years ago, had a span of 330 to 360 feet. Incidentally, Great Arch near the Highway 6 tunnel in Zion National Park is not an arch at all under the NABS definition—it is an “alcove” since it does not have an open space (“daylight”) behind the arch-shaped rock. Utah also has hundreds of exceptionally large alcoves.

So why does Utah have huge arches?

Natural rock arches are actually quite common. Nearly every state and country has natural arches large enough for people to walk through. For example, due to karstic weathering (dissolution of limestone bedrock), Kentucky may have the second largest number of “significant” arches of any state. What makes Utah unique is the gigantic size of many of its arches.

Exceptionally large arches require several criteria that must all come together in just the right way—a very rare occurrence indeed. These include:

• Very thick, isotropic rock—all of Utah’s largest arches are in massive quartz sandstone; the homogenous nature of the sandstone allows for large conchoidal (curved) fractures that are required to produce the inherently stable arch shape.

• Weaknesses in or below the otherwise isotropic rock, such as bedding planes or joints, that act as “seed” sites for arch formation.

• Rock that is moderately, but not exceptionally, strong or brittle.

• An arid climate—whereas small and medium arches are common in many environments, all of the largest arches are in areas having dry climates.

• In some settings, abundant loose sand that holds moisture against the base of sandstone fins for days to months, allowing the moist basal rock to weather and erode at higher rates than exposed rock, eventually forming an arch (in contrast, rare rain and snow on exposed rock in the arid climate commonly evaporates in minutes to hours).

In Utah, these major factors come together over huge areas of the Colorado Plateau, giving the state an abundance of large natural rock arches.