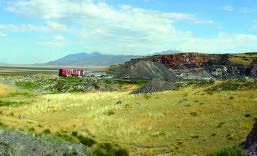 Pit in Mississippian Great Blue Limestone near Tenmile Pass, Tooele County, that produces crushed stone. This pit has also been prospected as a source of limestone for Portland cement production.

Question: Why is the paper on which this article is printed a bright white color? Because the wood fiber in the paper is filled and coated with white geologic materials like talc, clay, and limestone — a little known fact. This is only one example of how limestone, a basic constituent of our material world, is underappreciated; limestone is very important to the economies of Utah and the world.

Limestone is a common sedimentary rock composed mostly of calcium carbonate. It constitutes about 15% of the earth’s sedimentary rocks by volume. Most limestone formed from the accumulation and cementation of skeletal and shell fragments from plants and animals that lived in shallow waters of oceans and lakes. Calcium carbonate can also precipitate directly in caves, in hot springs, and in hydrothermal veins. An interesting example of direct precipitation of calcium carbonate in Utah is oolite formation in Great Salt Lake. Oolites are the small, egg-shaped, white sand grains that form many of the white sand beaches along the shores of the lake.

Limestone’s major industrial uses are as crushed stone, in lime manufacture, and in cement manufacture. Crushed stone is used for a variety of construction purposes like road base and concrete aggregate. In 2003, companies in the United States produced 1.08 billion tons of crushed limestone with a value of $5.46 billion. High-calcium limestone can be heated in kilns and converted to lime (calcium oxide) that is used for metallurgical, environmental, chemical and industrial, and construction purposes. In 2004, U.S. companies produced 18.2 million tons of high-calcium lime worth about $1.3 billion. Cement is limestone that is processed at high temperature with shale, sandstone, and iron. (Cement when mixed with water and crushed rock or sand and gravel becomes concrete.) In 2004, U.S. companies produced 105 million tons of cement worth about $8 billion and the concrete made from the cement was worth about $45 billion.

The value of the limestone in many of these uses depends on chemical purity that is commonly expressed in percentage of contained calcium carbonate. Limestone containing 95% or more calcium carbonate is termed high-calcium limestone. Only a small amount of the limestone exposed on the earth’s surface is this pure, so it is economically important to know where this material occurs. To answer that question for Utah, the Utah Geological Survey has recently completed a preliminary study of high-calcium limestone resources of the state, published as UGS Special Study 116, “High-Calcium Limestone Resources of Utah.”

Special Study 116 reports that Utah’s most important deposits are in Paleozoic-age (Cambrian, Devonian, and Mississippian) shallow-marine rocks, primarily in the western half of the state. Tertiaryage lacustrine rocks of central and northeast Utah contain large volumes of limestone but they are generally less pure than the Paleozoic limestone. There are some Mesozoic-age formations that probably contain small amounts of high-calcium limestone. Quaternary-age cave travertine, hot springs tufa, and Great Salt Lake oolite deposits in Utah have been used as local sources of high-calcium limestone. The report identifies 84 high-calcium limestone workings in Utah, ranging from small pits to large quarries. Although not all carbonate rocks in Utah were systematically evaluated, the report includes 387 available chemical analyses from 46 stratigraphic formations. Furthermore, Special Study 116 predicts that Utah’s high-calcium limestone production should increase at a rate comparable to the state’s population growth, because of high-calcium limestone’s importance to residential and commercial construction; the Utah Governor’s Office of Planning and Budget has projected the state’s population to increase 60% between 2003 and 2030,

UGS geologists are collecting and analyzing additional limestone samples to add more detail to the general picture presented in Special Study 116; these results will be made available on the UGS Web site,