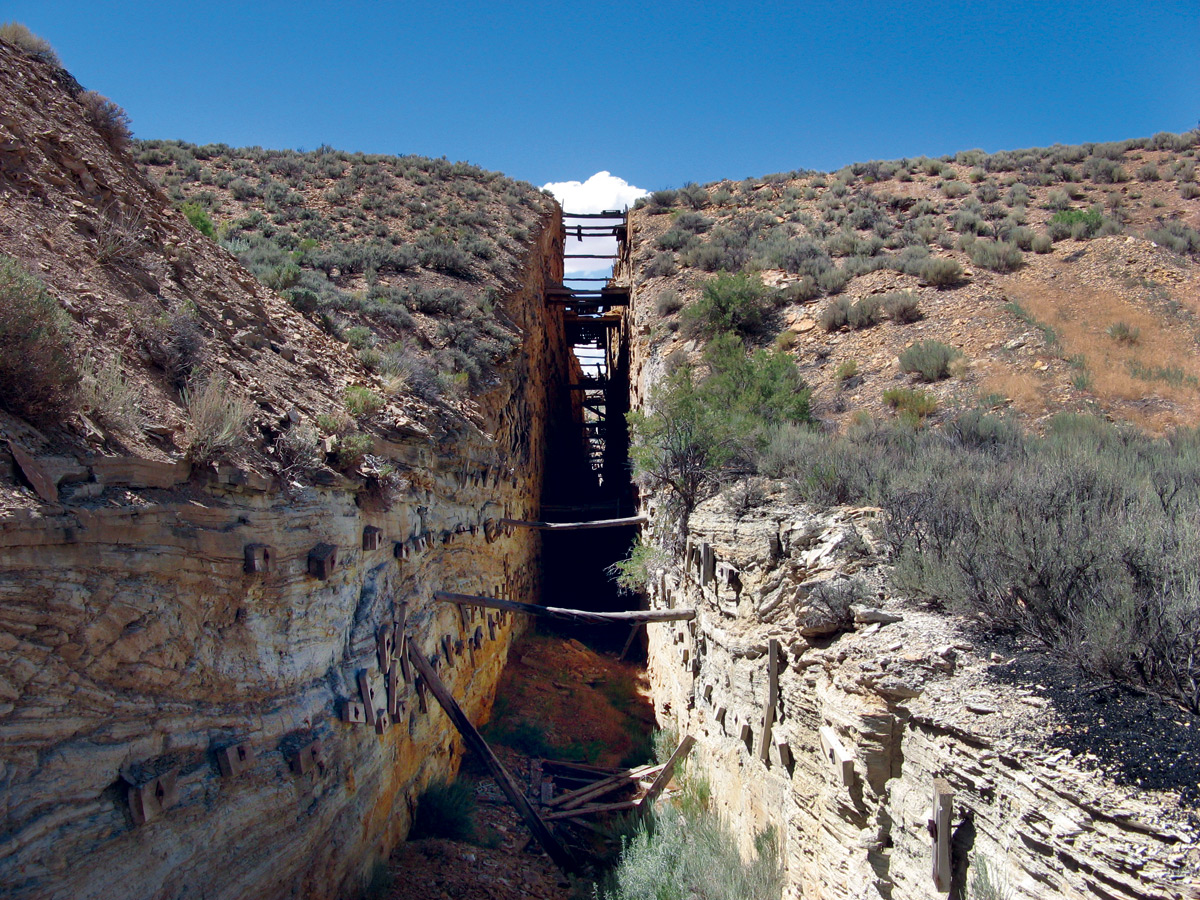 Historical open-cut mining on the southeast end of the Cowboy vein. 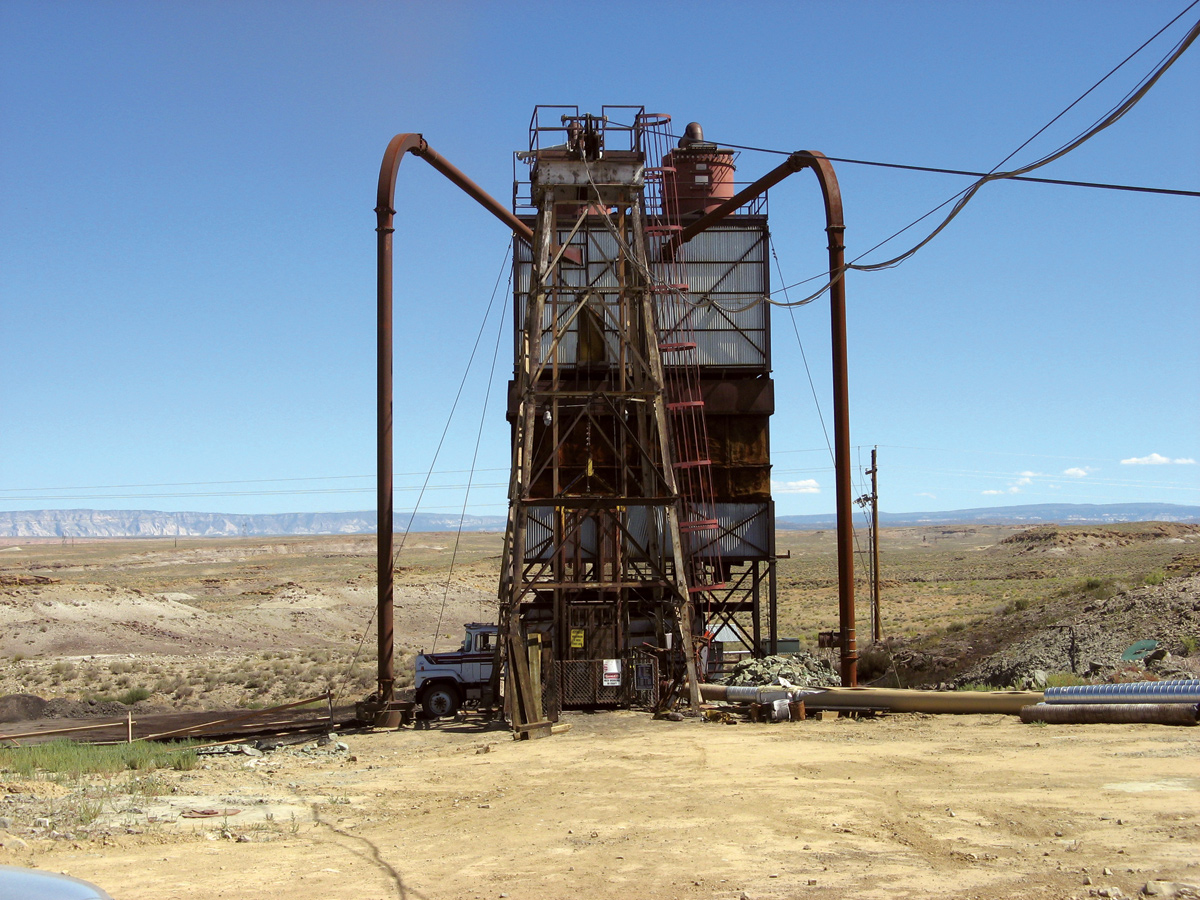 Gilsonite, one of Utah’s earliest mined industrial minerals, is currently experiencing increased interest by the oil and gas industry, which has resulted in a significant increase in development of the resource. The Uinta Basin of eastern Utah hosts the world’s largest deposits of gilsonite, and is the only place where gilsonite is economically produced in large quantities. Gilsonite has a wide variety of industrial applications and is used by companies worldwide. Major uses for gilsonite include ink and paint, and as a performance additive for the foundry and asphalt industries, but the oil and gas industry has developed as a growth market for gilsonite due to the expansion of various applications in well drilling.

Gilsonite is a geologically interesting and economically significant resource, and its wide range of uses has changed over time with new technology and industrial needs. Gilsonite’s unique properties make it important for many oilfield drilling fluid products and the recent boom in oil and gas development has increased demand. When gilsonite is added to oil- and water-based drilling fluids, it partially melts or deforms, plugging off micro-fractures in the rock and smearing the inside of the well bore to make a tight, tough filter cake that prevents fluid loss. The dissolved gilsonite also increases drilling f luid viscosity, providing lubrication, and together with the sealing off and stabilization of problem rock around the well bore, helps prevent the drill pipe from getting stuck in the well. Gilsonite is also used in cementing fluids as a lost circulation material due to its plugging and binding properties, and as a slurry density reducer in some specialty cementing fluids.

Gilsonite is a member of the asphaltite group of hydrocarbon bitumens, and forms a swarm of subparallel, northwest-trending, near vertical, laterally and vertically extensive veins in the Uinta Basin of Utah and Colorado. Gilsonite was generated from the Mahogany oil shale zone in the Parachute Creek Member of the Eocene Green River Formation, and is hosted in the Tertiary-aged (about 57 to 36 million years old) Wasatch, Green River,Uinta, and Duchesne River Formations. The veins range from sub inch to as much as 22 feet wide, and formed in two stages associated with thermal maturation of the Mahogany oil shale. High pressures deep in the Uinta Basin led to expulsion of large quantities of hot water from the oil shale rocks, which hydrofractured the overlying and underlying strata. Subsequently, thick, liquid gilsonite was expelled from the oil shale source beds, forcing open the existing fractures in the overlying and underlying strata. The gilsonite later solidified in these fractures, probably primarily through cooling. The gilsonite veins are widespread across the Uinta Basin, extending from Rio Blanco County in western Colorado to Duchesne County in eastern Utah.

Gilsonite has a long, colorful mining history dating back to the late 1800s. Gilsonite, named after Samuel H. Gilson, was discovered in the 1860s in Utah. Gilson was not one of the original discoverers, but his enthusiastic development and promotional efforts linked the material to him, and the name gilsonite further solidified in common usage when an early mining company adopted and trademarked the name. The first regular shipments of gilsonite began in 1888, from veins in the Fort Duchesne area. Early gilsonite mining was predominantly by open cut mining with picks, shovels, and horse-powered hoists (for more background see Survey Notes v. 36, no. 3, July 2004).

Historically, mining occurred at various veins and locations in the gilsonite field, but it is currently concentrated on the widest known veins around Bonanza, Utah. Permitted mining in this area occurs on the Cowboy, Independent, Little Bonanza, Wagon Hound, and Little Emma veins. All the gilsonite produced today from the Uinta Basin is by underground mining methods. Current mining consists of two major phases: (1) shafts are sunk at regular intervals along the veins, and (2) drifts and slopes are then extended laterally from the shafts. The top 30 feet of the gilsonite is not mined for safety and reclamation reasons. Gilsonite mining is labor intensive, because of its unusual mode of occurrence in narrow (down to 18 inches wide), deep, vertical veins; and the explosive hazards associated with gilsonite dust. The mining of the ore is still done by hand, using air-powered chipping hammers to carefully break the gilsonite while avoiding contaminating the ore with broken wall rock, since product purity is important to customers. The broken ore enters a vacuum tube at the bottom of the underground mined area and is air lifted to the surface, where it is deposited into a bag house next to the shaft headframe and then trucked to a plant for processing.

American Gilsonite Company (AGC) and Ziegler Chemical and Mineral Company are the only companies that mine and process gilsonite at their operations in southeastern Uintah County. Gilsonite production in 2012 was about 82,000 short-tons, with AGC responsible for most of that production. Gilsonite production in 2012 is valued at approximately $89 million, at an average price of about $1085 per short-ton (as reported by the U.S. Office of Natural Resources Revenue). Gilsonite value has significantly increased from oilfield demand, and gilsonite sales to the oilfield market have increased over 150% since 2009. In response to increased demand, AGC has initiated an approximately $20 million investment program to open new mines, explore new mine development methods, develop strategic long term reserves, and continue investment in health and safety. AGC expects to double its current production capacity in the near future to satisfy customer demand, and has opened three new mines in the last 18 months, with five more under active development.

Even though significant amounts of the approximately 45-million-short-ton original gilsonite resource have been mined, millions of tons of the valuable resource still remain. This resource tends to be in the deeper parts of the veins and in thinner, more remote veins that will likely be more expensive to mine than veins mined in the past. Recent mapping by the Utah Geological Survey (Special Study 141) of the gilsonite deposits in the Uinta Basin has located and described many of the more remote veins, which were previously only vaguely known. At the planned increased production rate, gilsonite could continue to be mined in the Uinta Basin for decades, ensuring a steady supply to world markets of this unique and valuable Utah resource.