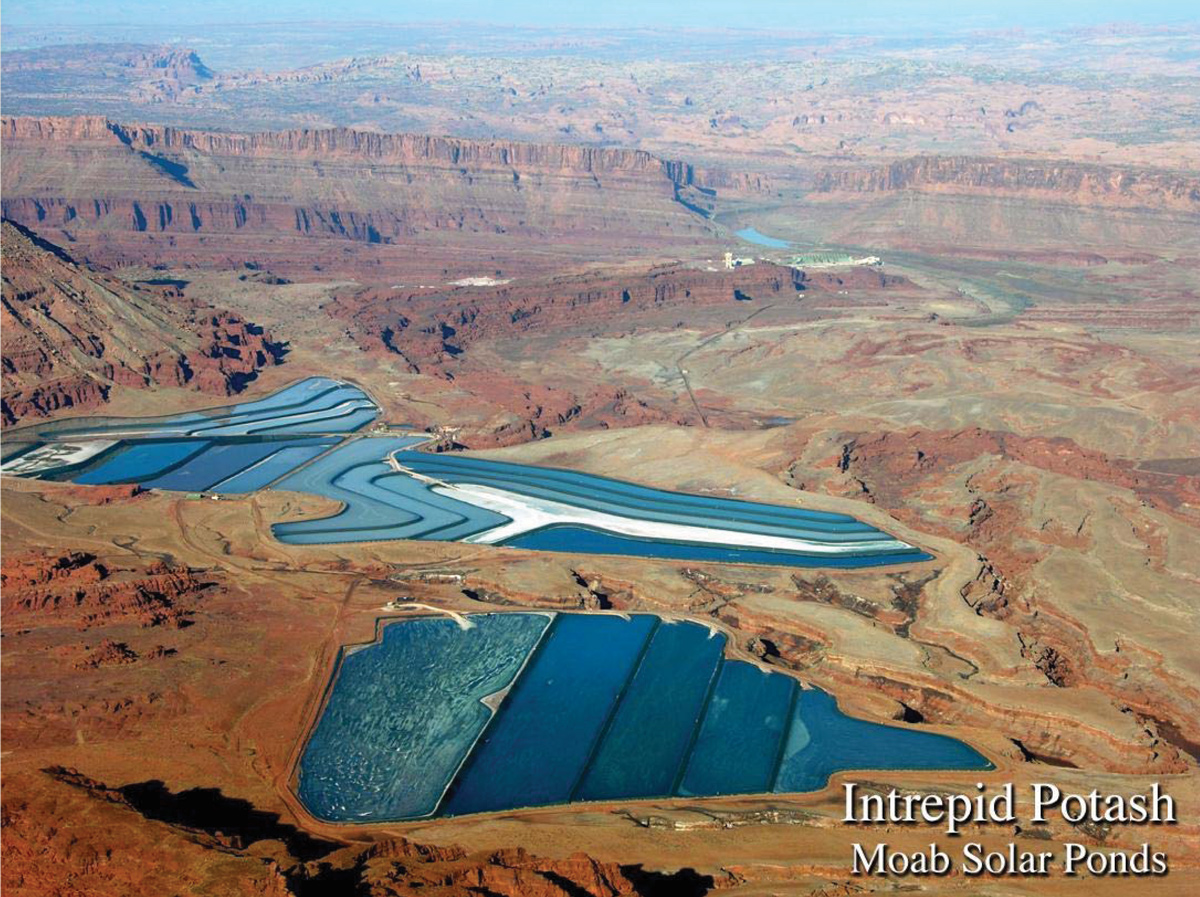 Intrepid Potash’s solar evaporation ponds near Moab. The blue color is caused by dye added to the brine to increase evaporation. The dry potash is harvested and hauled for processing at the plant located in the upper-right part of the image. Photo credit: Intrepid Potash, Inc. 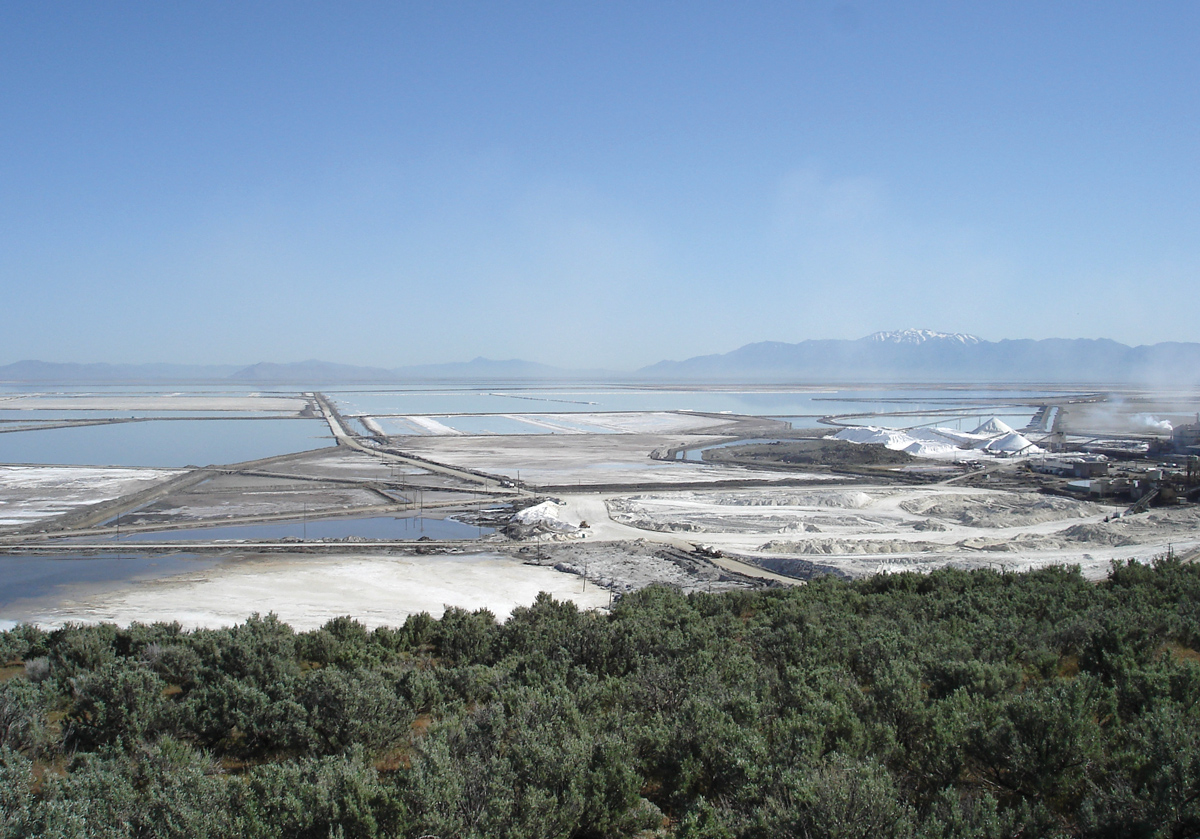 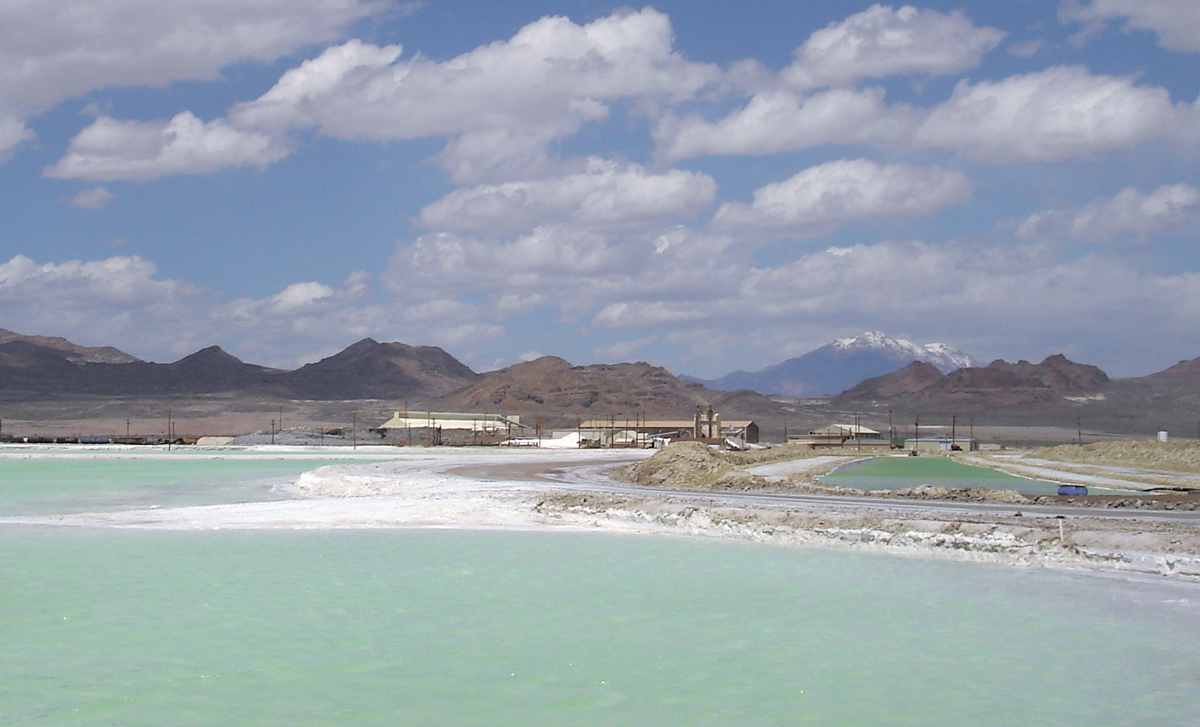 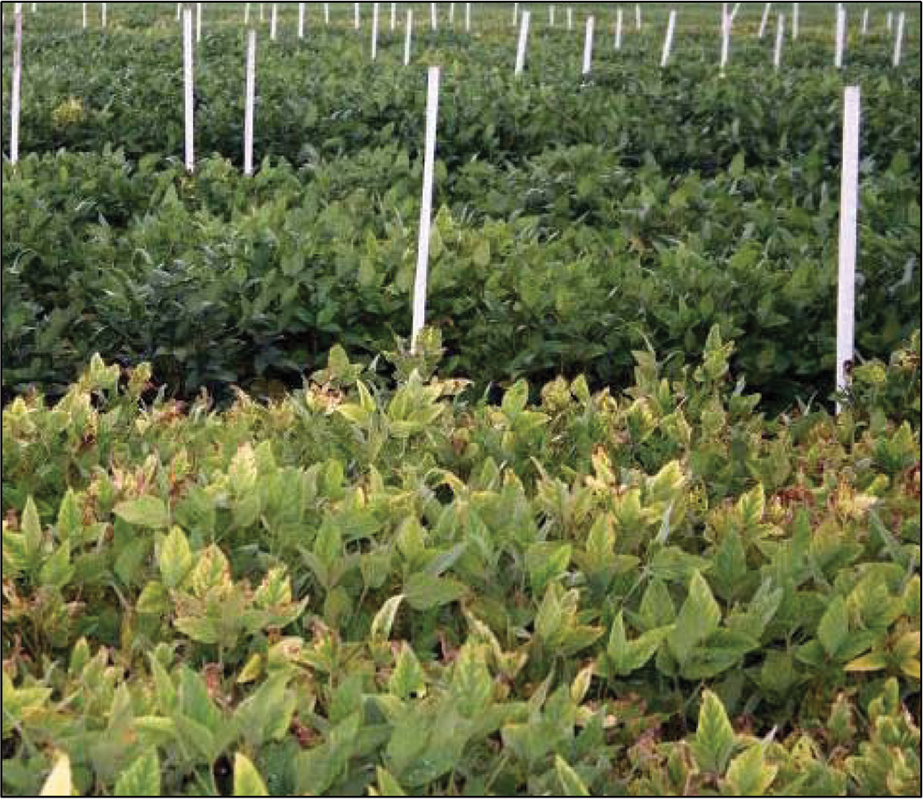 Bryce Tripp has worked with the Utah Geological Survey since October 1979 as an industrial mineral geologist, project manager, section chief, and program manager.

He graduated from the University of Utah, Department of Geology, with a B.S. degree in 1977. Bryce has studied tar sand, zeolite, high-calcium limestone, dimension stone, gypsum, sand and gravel, gilsonite, and potash resources of Utah. He has also worked on long-term projects providing industrial mineral information to state and federal land management agencies.

He is a member of the American Association of Petroleum Geologists and Society for Mining, Metallurgy, and Exploration Inc., and is a member and past president of the Utah Geological Association. Bryce retired from state employment in December 2009.

The word potash refers to a group of naturally occurring potassium-bearing minerals, the most common of which is sylvite (potassium chloride). Potash is used to manufacture a variety of products including soap, glass, synthetic rubber, and explosives. Potash is also an essential plant nutrient, and 93% of the potash mined in the world is used as plant fertilizer. The word originates from the historical practice of burning wood to obtain potassium carbonate-bearing ash which was then leached and precipitated in iron pots—“pot ash.” This nutrient is contained in all balanced fertilizer mixes. Bags of fertilizer are labeled with an N-P-K code like 30-10-10; the first number indicates the nitrogen content (N), the second number indicates the phosphorous content (P), and the third number indicates the potassium content (K).

Potassium is found in a variety of salts, is a common element in many rock-forming minerals, and is the 7th-most common constituent of the Earth’s continental crust (about 2%). It is most concentrated and in a water-soluble form in (1) surface and subsurface brines of closed-basin lakes and (2) restricted marine basin (evaporite) deposits. Evaporite deposits worldwide are the most economically important sources of potash. Evaporite minerals precipitated out of concentrated sea water in geologic basins that were partially restricted from the open ocean. Minerals dissolved in sea water precipitate sequentially from solution (during evaporation) based on their solubilities so carbonate minerals precipitate first, then sulfates, and finally chlorides. Sylvite is one of the last salts precipitated; almost all of the water in brine has evaporated before sylvite starts to precipitate.

Potash prices have historically been very stable; between 1994 and 2003 the price remained in the range of $146 to $179 per ton. The potash price started rising in 2005 and during 2008 spiked to more than $900 per ton, but by mid-2009 had declined to about $500 per ton. Increased potash prices were caused by an increased standard of living in developing countries (with increased use of chemical fertilizer) and also increased use of fertilizer for ethanol production from corn.

The high potash prices of the past few years have encouraged a flurry of potash exploration and development worldwide, including in Utah. The Paradox Basin has received more interest than other Utah potash resources because it is the largest resource with the most opportunities for new developments.

As the Paradox Basin began subsiding, a few hundred feet of predominantly carbonate sediments were deposited as the Pennsylvanian Pinkerton Trail Formation of the Hermosa Group. The basin then became partially restricted from the open sea and as much as 5000 feet of predominantly evaporite sediments (gypsum, halite, potash, and magnesium salts) were deposited as the Paradox Formation of the Hermosa Group. Fluctuations in sea level, and probably in basin subsidence rates, resulted in deposition of 29 rhythmically bedded evaporite cycles; in 18 of the cycles, evaporation proceeded to the point of potash deposition. The salt cycles in the Paradox Formation are often laterally continuous and can be traced, through interpretation of well logs, in the subsurface for tens of miles. The depositional center of the basin shifted over time and the basin floor had varied topography, so not all 29 salt cycles are stacked vertically at any one point in the basin. In the 1960s, Robert Hite (with the USGS) devised a stratigraphic framework for the salt cycles, numbering them from 1 (shallowest) to 29 (deepest) and correlated them across the Paradox Basin. Intrepid Potash, Inc., solution mines the potash of salt cycles 5 and 9 at its Moab mine.

The salt-bearing zone in the Paradox Basin is about 4000 feet thick and is composed of 10 percent potash beds, 25 percent shale beds (with anhydrite and dolomite), and 65 percent halite beds. Usually eight to 10 potash zones underlie the potash resource areas of the basin and have an aggregate thickness ranging from 220 to 460 feet. In 1965 the U.S. Bureau of Mines estimated the Paradox Basin known potash reserves to be 254 million tons (K2O equivalent) with an inferred reserve of 164 million tons (K2O equivalent). This estimate was based on underground mining of potash beds greater than 4 feet thick, containing more than 14 percent K2O content, and at depths less than 4000 feet. Due to potash deposit complexity, safety issues with underground mining in the Paradox Basin, and improvements in horizontal drilling technology, any future development will likely be by solution mining. Solution mining through drill holes may make potash from beds as deep as 9000 feet recoverable, greatly expanding the potash resource. Some of the oil and gas wells drilled between 1965 and the present penetrated the potash zone; this additional information would probably increase the U.S. Bureau of Mines potash reserve estimates listed above.

The Utah School and Institutional Trust Lands Administration and the U.S. Bureau of Land Management (BLM) have met with many companies about exploration and leasing of land in the Paradox Basin. However, there are a few hurdles to new development: (1) the BLM needs to re-examine their Known Potash Leasing Area boundaries before granting new leases, (2) the recent world credit crisis has made funding for new developments difficult to obtain, and (3) the price for potash has declined from its peak at the end of 2008. Even with these hurdles, development of new solution mines in the Paradox Basin seems possible if potash prices remain at their relatively high level or increase.