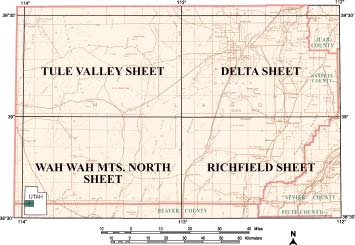 Index map showing the 1:100,000-scale geologic maps that cover Millard County. Name of each sheet is taken from the principal U.S. Geological Survey 30- x 60-minute topographic quadrangle covering the area, although strips of the following quadrangles were also geologically mapped to cover the western and northern edges of the county: Garrison, Ely, Kern Mountains, Fish Springs, and Lynndyl. 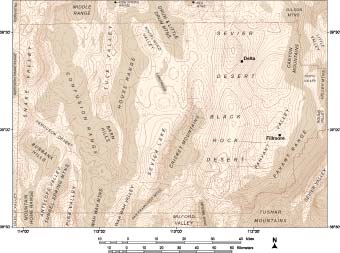 In the fall of 2003, the Utah Geological Survey published the last parts of one of its largest and longest running projects, a comprehensive study of the geology of Millard County in westcentral Utah. The county is geologically important because it contains a six-mile-thick, exceptionally complete and well-exposed record of the past nearly billion-year geologic history of the western United States. This major study was conducted mostly by Dr. Lehi F. Hintze (see companion article), one of Utah’s most wellknown and published geologists, and the namesake of the newly created Lehi Hintze Outstanding Geologist Award (with Lehi as its first recipient).

The Millard County publications are four 1:100,000-scale, color geologic maps (index map) and a roughly 300- page bulletin (see list at end of article). These publications will be invaluable to earth scientists (geologists, paleontologists, geophysicists, geochemists, and other specialists) for decades to come. The maps and bulletin cover more than 6,600 square miles and are the products of over a half century of geologic studies by Dr. Hintze, with major contributions from coauthor Fitzhugh Davis (Utah Geological Survey, retired), Myron Best (fellow Brigham Young University professor), Jack Oviatt (Kansas State University), and Dorothy Sack (Ohio University). With a reference section that runs over 25 pages, the bulletin is a scientific treatment of the geology of the county. In particular, the bulletin covers the stratigraphy, sedimentology, paleontology, structural geology, and geophysics of the area. With over 200 figures, including numerous photographs of vistas and fossils (page 4), the bulletin will also enable rockhounds and fossil collectors to better understand the significance of Millard County’s outstanding geologic heritage.

Direct work on these publications began in 1986. Prior to 1986, Dr. Hintze, with the aid of BYU geology professors and students, had mapped much of the bedrock in Millard County, typically exposed in the mountain ranges. However, little geologic mapping had been done in the valleys (Quaternary deposits) of western Utah. In 1986, Oviatt and Davis began mapping the Quaternary (less than about 2-million-year old) deposits and rocks that cover more than two-thirds of Millard County, and the fault scarps in these deposits. Their approach and classification system for Quaternary mapping worked well and Oviatt, Davis, Sack, and Hintze completed the Quaternary mapping of Millard County. In the bulletin, Davis describes the relative age, grain size, and consolidation (or lithification) of the 30+ Quaternary sedimentary map units in Millard County, and Hintze describes about 20 Quaternary volcanic-rock units. Together they mapped and inventoried faults that have broken the surface (formed a scarp) in Quaternary deposits and rocks (tables in the bulletin include age, scarp height, and length). These characteristics and the mapping are an aid in geotechnical engineering studies, when more detailed information is not available, and are also useful for land-use planning and assessing geologic hazards.

Along the way to publication the bulletin changed. The geologic mapping was expanded to include the non-Millard County portions of the four main 30- x 60-minute quadrangles (1:100,000 scale) that cover the county (page 3), so the maps include at least 50 square miles each of Beaver, Juab, and Sevier Counties, and slivers of Piute and Sanpete Counties. These four geologic maps were completed with the aid of National Cooperative Geologic Mapping Program (STATEMAP) dollars. Dr. Hintze created new and revised correlation charts and stratigraphic columns for different parts of Millard County and for each of the four geologic maps; these are like, but are updated versions of, the correlation tables and stratigraphic charts in his book Geologic History of Utah. These figures provide a quick summary of map-unit names, ages, characteristic fossils, thicknesses, lithologies, and other important data. Also, the Millard County bulletin contains a wealth of fossil information including photographs and range charts. Another major contribution of the bulletin is the revision of Cenozoic rock stratigraphy, which roughly includes rocks formed in the last 65 million years, using newer and improved isotopic dating (also known as radiometric dating)

Lastly, the Millard County bulletin contains subsurface (mostly geophysical) data including seismic reflection profiles (like those used to look for oil and gas fields), gravity profiles, a new gravity contour map (above), and lithologic well data (also known as borehole data) obtained from oil and gas, mineral, geothermal, and water exploration wells. These subsurface data provided the shape of the basin valleys buried below ground level, and were used to decide where Quaternary normal faults are located that do not have surface scarps.

The following publications from the Millard County study are available from the Natural Resources Map and Bookstore. A CD of digital files of the maps, including geographic information system (GIS) files, will be released later.