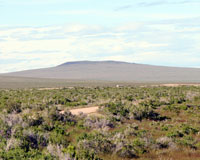 What are geological features and processes? Well, the features constitute anything from major landforms such as mountains or plateaus, to ripple marks or glacial striations (grooves) on a rock. The geological processes, such as volcanic eruptions, earthquakes, erosion, and deposition are what create or change geological features.

Volcanoes are created by internal forces within the Earth that cause heated, melted rock (magma) to rise to the surface. First collecting in magma chambers, some of the magma eventually pushes upward through cracks (vents) to the Earth’s surface. As the magma reaches the surface, it loses some of its gases and turns into lava. Volcanoes are created by the release and build-up of lava and other materials.

Volcanoes have varied shapes and sizes, but are divided into three main kinds depending on the type of material that reaches the surface and the type of eruption that ensues. Utah has all three types!

Composite volcanoes (stratovolcanoes) develop from repeated explosive and nonexplosive eruptions of tephra (airborne lava fragments that can range in size from tiny particles of ash to house-size boulders) and lava that build up layer by layer. These volcanoes are the largest and form symmetrical cones with steep sides.

Some composite volcanoes in Utah are in the Tushar Mountains (Mt. Belknap, for example) in Piute County. Now extinct, they are too old (between 32 and 22 million years) to maintain the classic volcanic shape of their modern-day counterparts, such as Mount Hood and Mount St. Helens in the Cascade Range along the northwestern coast of the United States.

Shield volcanoes form from “gentle” or nonexplosive eruptions of flowing lava. The lava spreads out and builds up volcanoes with broad, gently sloping sides. The low-profile shape resembles a warrior’s shield.

In Utah a good example is the 1 million-year-old Fumarole Butte in Juab County. Currently active volcanoes of this type are found in the Hawaiian islands.

Cinder cones build from lava that is blown violently into the air and breaks into fragments. As the lava pieces fall back to the ground, they cool and harden into cinders (lava fragments about ½ inch in diameter) that pile up around the volcano’s vent. Cinder cones are the smallest volcanoes and are cone-shaped.

Cinder cones are found in many areas of Utah including Millard, Iron, Garfield, Kane, and Washington Counties, and they vary in age. The youngest, only about 600 years old, are in the Black Rock Desert in Millard County.

1. Students can make models of the three volcanoes.

(a) Materials for pairs of students:

Depending on the water/Plaster of Paris ratio, the “lava” will range from liquid to viscous, which is true to nature. Some “lava” may take on a rope-like appearance, which is called pahoehoe (pa-hoy-hoy) lava.

Have the students share their results, and explain if their eruption was explosive or not.

Ask what type of volcano they created (shield).

(b) Materials for teacher:

Ask the students what type of material this may represent in a real volcano (cinders or tephra).