Teacher’s Corner: Use a Settling Container To Determine the Relative Amount of Sand, Silt, and Clay in Sediment 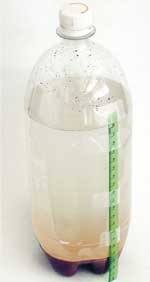 The size of grains in sediment correlates directly with the amount of energy necessary to move and deposit it. High-energy processes, such as the ocean surf, glaciers, rivers, and landslides move very large fragments. Medium- and low-energy wind and quiet-water processes transport smaller sizes.

Sand and gravel grains are visible with the unaided eye, whereas a magnifying glass is needed to distinguish individual silt grains. Silt grains are gritty between your teeth; clay grains are not gritty. Most clay grains are “sticky.” Sediment that has a high percent of clay particles can be rolled between your hands into a “worm” when mixed with a little spit or water.

2. Crush the dirt clods, and pick out any gravel, animals, and plants.

3. Put the sediment into the soda bottle, add one teaspoon of detergent, and almost fill the bottle with water.

4. Shake vigorously to mix and suspend the sediments. The detergent breaks up sticky clay particles.

5. Gently place the bottle on a flat surface where it won’t be disturbed for several hours and begin timing the sediment fall.

6. After 45 seconds, place the ruler against the outside of the bottle and measure the height of the SAND deposit from the bottom of the bottle. This value is A.

7. After 1 hour measure the height of the SAND + SILT column from the bottom of the bottle. This value is B

8. The height of the SAND + SILT + CLAY column is measured when the remaining water looks like dilute tea or tainted water, after about 4 hours to several days. This value is C.

10. You now have percentages of SAND, SILT, and CLAY in the sediment.