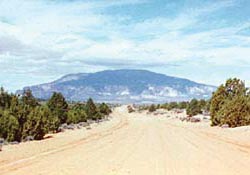 Geological features constitute anything from major landforms such as mountains or plateaus, to ripple marks or glacial striations on a rock. The geological processes, such as volcanic eruptions, earthquakes, erosion, and deposition are what create or change geological features.

Mountains are major geological features on the surface of the Earth. Depending on what geological processes created these landforms, mountains can be classified as different types: volcanic, dome, fold, and fault block. Utah has all four types.

Dome Mountains are formed from hot molten material (magma) rising from the Earth’s mantle into the crust that pushes overlying sedimentary rock layers upward to form a “dome” shape. Unlike a volcano, the magma typically does not reach the Earth’s surface. Instead, the magma cools underneath the surface and forms the core of the mountains.

Dome mountains in Utah include Navajo Mountain and the La Sal, Abajo, and Henry Mountains in the southeastern part of the state.

Materials for pairs of students:

What does the toothpaste represent? Magma.

What could happen inside the earth that would create the same effect? Magma can squeeze and move like the toothpaste.

What does the grass represent? Rock layers and the surface of the Earth.

How is this landform different from a volcano? The magma does not erupt onto the surface of the earth.