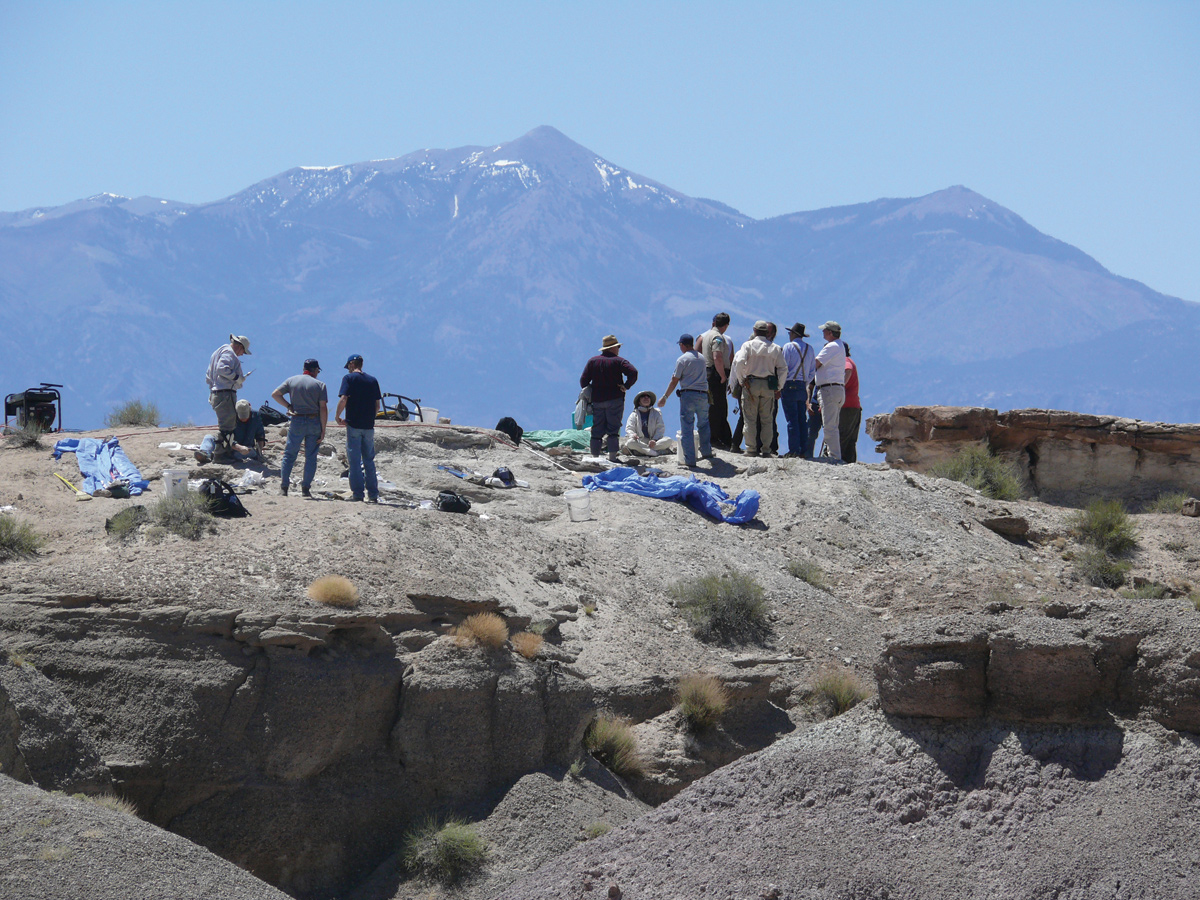 BLM personnel consult with Burpee Museum staff and volunteers as to the next step in researching and preserving the Hanksville-Burpee Dinosaur Quarry. 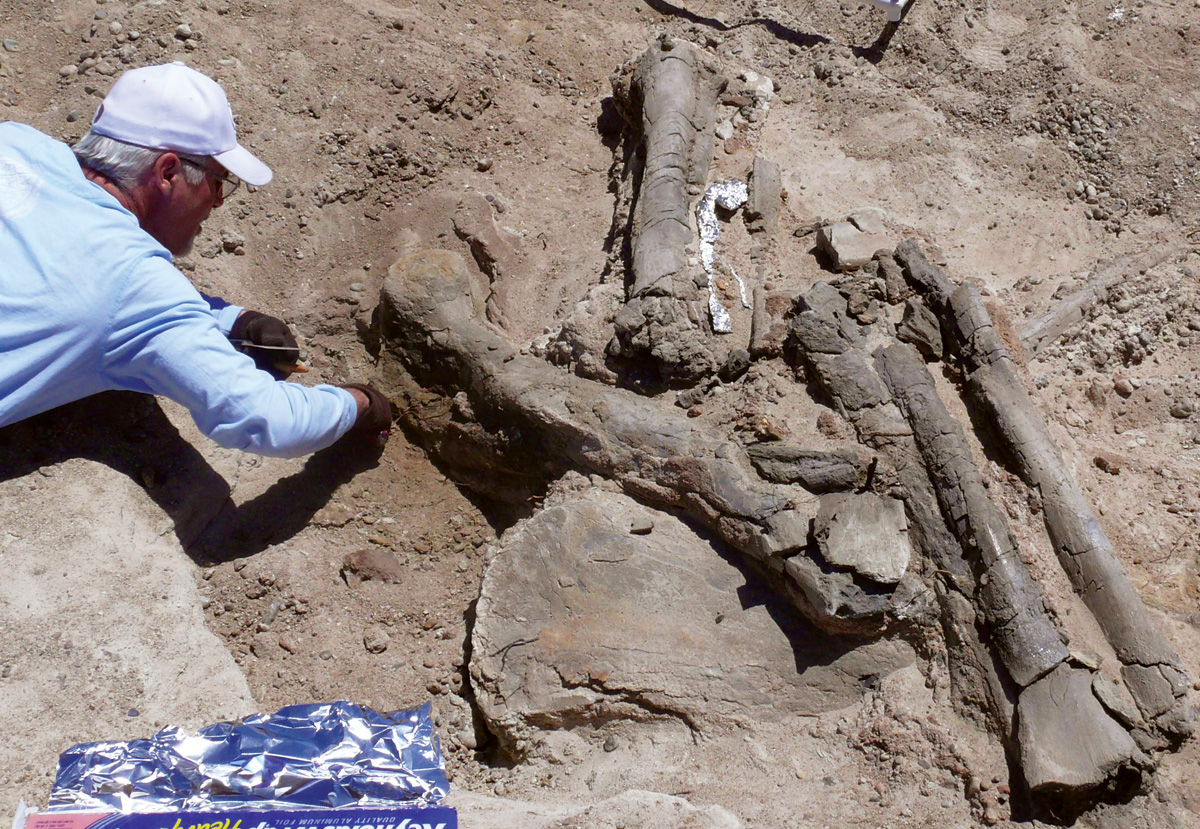 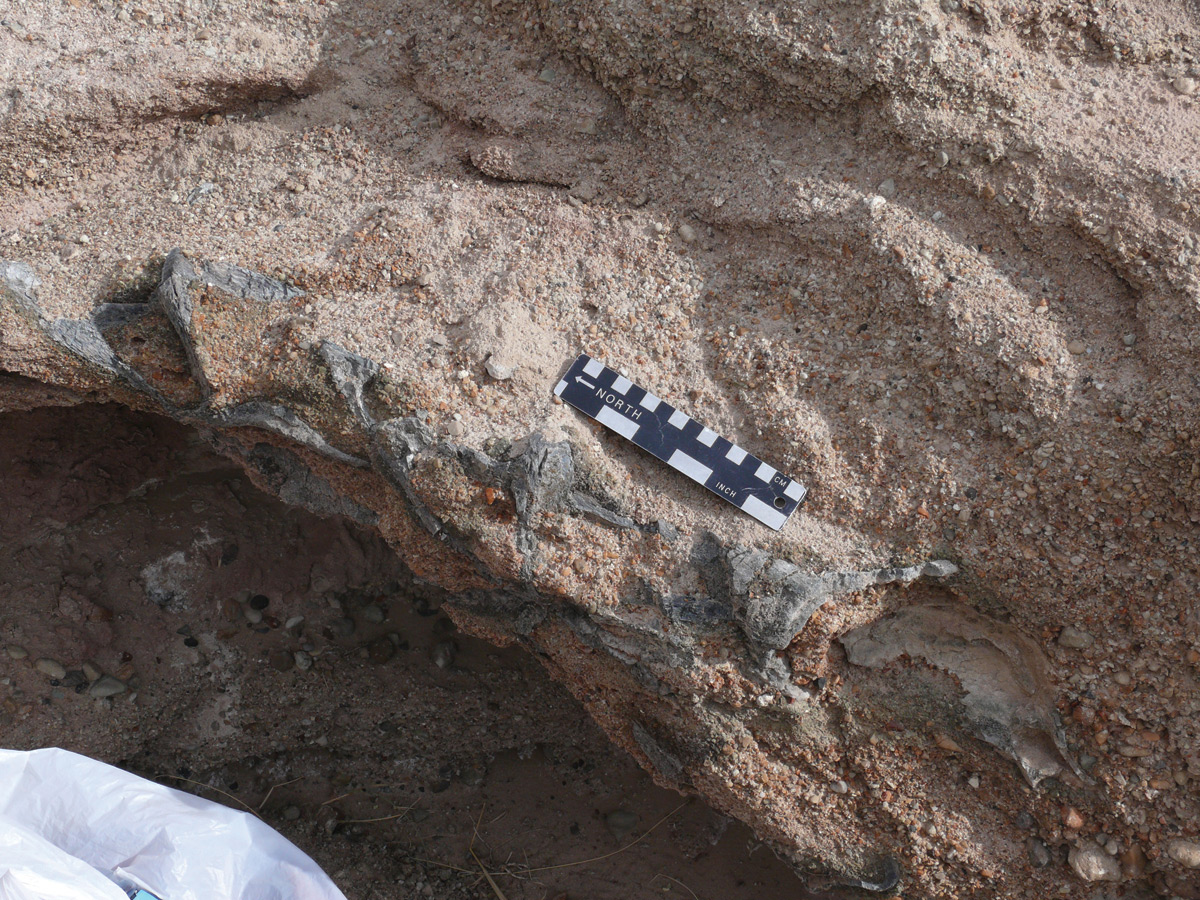 Permits are required of qualified paleontologists to collect vertebrate fossils (e.g., fish, dinosaurs, and mammals) and their traces (e.g., tracks and eggs). Permit applications must include a research plan. Additionally, all fossils collected must be placed in a recognized repository, such as a museum with properly catalogued fossil specimens and the financial stability to care for these collections in perpetuity. The State of Utah (permits issued by UGS) and the BLM are largely uniform in their paleontological permitting policies. There are three types of permits:

1. Surface collecting permits for initial investigations of a region, where no excavations larger than a cubic meter (about 27 cubic feet) are allowed.

2. Excavation permits for conducting large-scale excavations at specific sites. Site inspections are made to ensure there are no losses of other significant resources by the excavation process.

3. Mitigation permits are specifically for paleontologists investigating areas of planned surface disturbance to ensure there is no loss of significant fossil resources. Qualifications for these permits are more restrictive than other types of paleontological permits because the permittees are making recommendations that affect the public good.

Other land management agencies also protect significant fossil resources, but differ in the process by which they issue permits. One should always verify land ownership and/or management and specific permit requirements prior to extracting anything.

For more information about fossil collecting on state or federal land, refer to the following websites:

Rules and Regulations Regarding Rock, Mineral, and Fossil Collecting in Utah, PI-23

Utah’s spectacular geology preserves the most complete dinosaur record in the United States. From this 160-million-year record, Utah is most famous for its dinosaurs from the Late Jurassic Morrison Formation (152-145 million years old), with world-renowned sites such as Dinosaur National Monument and the Cleveland-Lloyd Quarry. Even so, hundreds of miles of stunning Morrison badlands have never been examined by trained paleontologists. Rock hounds have long known that the Hanksville area of south-central Utah preserves many large dinosaurs, but no paleontological research had been done in the area. When the Burpee Museum of Rockford, Illinois, contacted the Utah Geological Survey two years ago about where to find some big dinosaurs for a new exhibit hall, we recommended the Hanksville area.

Once the Burpee Museum staff (led by Scott Williams and Mike Henderson) had their surface collecting permits in hand last May, they checked in at the local Bureau of Land Management (BLM) office in Hanksville. BLM geologist Francis “Buzz” Rakow showed them a few sites outside of town, one of which had been known to local citizens for decades and had been subject to recurrent vandalism for years. Buzz hoped that a scientific investigation of the site might help put an end to this tragic and senseless destruction. The Burpee paleontologists quickly realized that they were looking at a major dinosaur bone bed where possibly dozens of dinosaur skeletons are preserved. After securing excavation permits for the site from the BLM, the Burpee Museum invited Dr. Matt Bonnan, a sauropod (giant long-necked) dinosaur expert from Western Illinois University to provide additional scientific expertise on the project. The museum also requested that the Utah State Paleontologist join them to help evaluate the site.

The Hanksville-Burpee Dinosaur Quarry is a gigantic site. It represents a large eastward flowing, braided-river channel with isolated dinosaur bones and many relatively intact skeletons shallowly buried in an area about a third of a mile long and 300 feet wide (roughly 10 acres). The site compares well with the largest known Morrison dinosaur sites, such as the Carnegie Quarry at Dinosaur National Monument, and is the southernmost such megasite known in the Morrison Formation outcrop belt. Five species of dinosaur tentatively identified in the field include a diversity of long-neckedsauropods (Apatosaurus, Diplodocus, Camarasaurus, and perhaps Brachiosaurus) and Utah’s State Fossil, the carnivorous Allosaurus. The fossils indicate that young animals dominate the site. Additionally, the site preserves fossil freshwater clams and snails as well as fossil plants, so eventually the food webs of this part of the Morrison ecosystem may be worked out.

The Burpee Museum is committed to this exciting project that will certainly require decades of field and laboratory research, and the UGS is gratified by the collaborative spirit demonstrated by the Burpee Museum. In addition to the numerous graduate students and professional paleontologists that will work on this project, Utah, and in particular the small community of Hanksville, will benefit from this ongoing research and the future interpretation of the site. The BLM is currently revising its management plan for the area to ensure that all of Utah’s citizens receive the maximum benefit from this important discovery.

Now that the preliminary site investigation has been done, the real work begins as the Burpee Museum seeks sponsors and grants. The Burpee Museum joins a large fraternity of researchers studying dinosaurs in Utah. Currently, there are more institutions permitted to conduct dinosaur excavations in Utah than in any other state. Many of these projects are focused on increasing our knowledge of dinosaurs already well represented in Utah museums. Meanwhile, Utah paleontologists continue to search some of our less famous but no less exciting rock layers for undiscovered dinosaur sites, adding to our already impressive list of dinosaur species known from nowhere else in the world.