By Christopher B. DuRoss and Greg N. McDonald 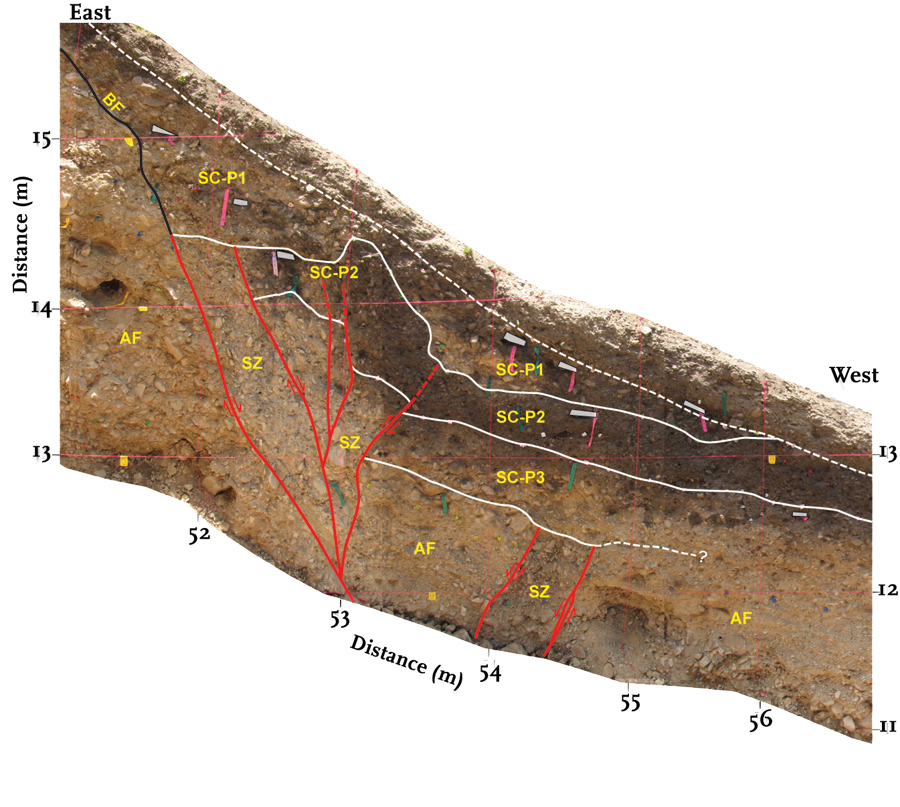 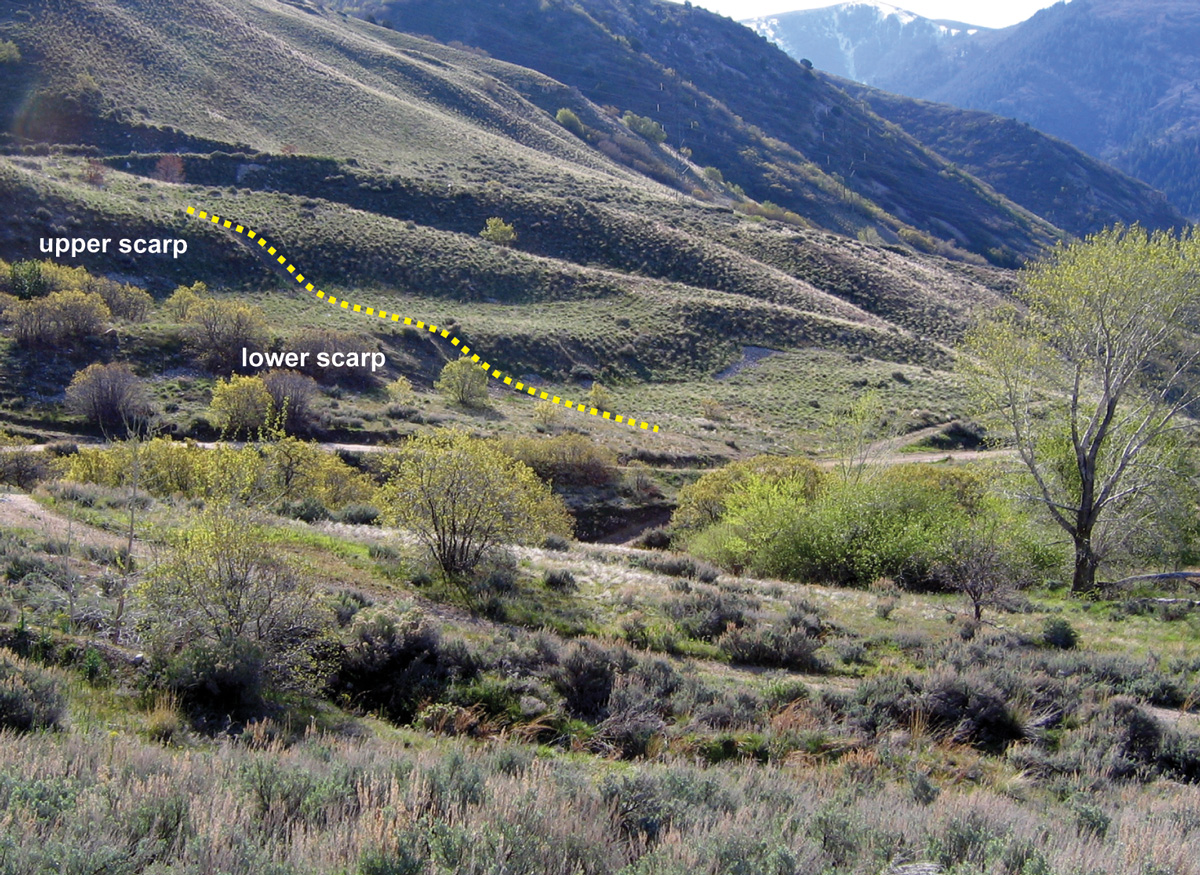 During the spring of 2007, the Utah Geological Survey (UGS) and U.S. Geological Survey (USGS) continued a cooperative program of studying prehistoric earthquakes on the Wasatch fault zone (WFZ) by excavating trenches on the northern part of the Weber segment. The WFZ is Utah’s most prominent and active fault, extending over 210 miles (340 km) from southern Idaho to central Utah and capable of producing earthquakes in the range of magnitude 7. The fault puts the populated Wasatch Front at risk as it traverses east bench communities at the base of the Wasatch Range. Although the WFZ has not produced a historical surface-faulting earthquake, detailed paleoseismic data gathered from fault-trench excavations indicate that 21 large-magnitude, surface-faulting paleoearthquakes have occurred on the central part of the fault in the past 6100 years (on average one earthquake every 300 years). These earthquakes did not rupture the entire 160-mile (250 km) length of the central part of the WFZ, but rather broke along individual fault segments, each spanning a 20- to 40-mile-long (30-60 km) section of the fault. The most recent large-magnitude earthquake on one of the central WFZ segments occurred about 350 years ago on the Nephi segment.

Recently, interest in the paleoseismology of the WFZ has renewed, as the fault is an ideal laboratory for studying the frequency and magnitude of surfacefaulting earthquakes in the Basin and Range Province. The most recent paleoseismic research on the WFZ includes studies of the Nephi, Provo, and Salt Lake City segments. Our current research focuses on the Weber segment, which extends about 40 miles (60 km) from North Ogden to North Salt Lake. The reasons for trenching the Weber segment include (1) a poorly constrained history of surface-faulting earthquakes from earlier trench studies, (2) large uncertainties in earthquake correlation and recurrence, fault displacement, and slip rate resulting from the limited data, (3) evidence for anomalously large- and small-displacement earthquakes on the segment, and (4) limited opportunities for investigating Holocene (past 11,500 years) earthquakes on the segment due to extensive development.

Faulted alluvial-fan deposits and faultscarp- related colluvium (soil and sediment that has collapsed and been eroded from the scarp face shortly after an earthquake) exposed in the trenches indicate that at least four Holocene surface-faulting earthquakes have occurred on this part of the WFZ. The earliest paleoearthquake occurred during the late stages of active alluvial-fan deposition, as indicated by a fault zone buried by fan sediments. We infer later surface-faulting events from the presence of scarp-derived colluvium deposited after alluvial-fan deposition ceased at the site. The alluvial fan at the Rice Creek site postdates abandonment of the Bonneville shoreline about 16,800 years ago, and comparison with the morphology and position of other fans along the segment suggests a young, possibly earlyto mid-Holocene age. These preliminary results indicate that the Rice Creek trench site provides a record of Weber-segment paleoseismicity that is comparable with previous studies of the Weber-segment near East Ogden (four events in 3000–5000 years) and Kaysville (three events in about 6000 years). At the Rice Creek site, we interpret at least four earthquakes in a presumably similar time period (about the past 5000–10,000 years).

To refine the Holocene earthquake history and overall rate of activity of the Weber segment, we submitted material for radiocarbon and luminescence dating. Radiocarbon dating of charcoal fragments will help constrain the timing of individual paleoearthquakes. Luminescence dating, which establishes when sand grains were last exposed to sunlight (presumably during deposition), will help constrain the age of the youngest alluvial-fan deposits at the site, provide a maximum time limit for all paleoearthquakes inferred from the trench investigation, and provide a time component for average slip-rate calculations.

To complete our ongoing study, we plan to develop a chronology of surface-faulting earthquakes at the site; determine a revised earthquake-correlation scheme among all trench sites for the Weber segment; refine estimates of fault displacement, slip rate, and earthquake recurrence; and compare our results with paleoseismic information for the adjacent Salt Lake City and Brigham City segments. Ultimately, these data are essential to understanding the segmentation of the northern WFZ, updating probabilistic ground-shaking-hazard maps for the region (e.g., the USGS National Seismic Hazard Maps), and revising seismic-design provisions in building codes.

This work was partly funded by the USGS National Earthquake Hazards Reduction Program; the USDA Forest Service and a private landowner granted land access. Collaborators on the trenching project include USGS geologists Anthony Crone, Stephen Personius, David Lidke, and Michael Machette; Utah State University student Stephanie Davi; and UGS geologists William Lund and Tyler Knudson. A final report of the investigation is planned for publication by the UGS in late 2008.