By Richard Emerson and Toby Hooker 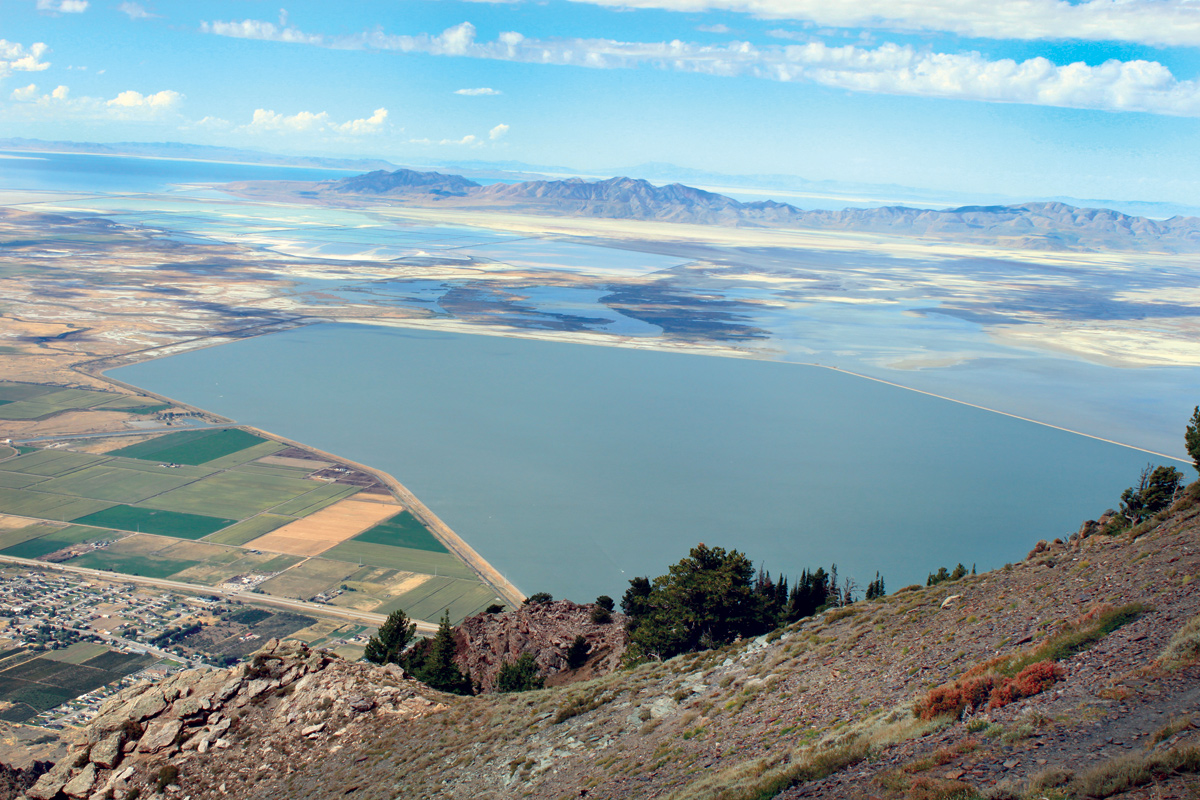 Numerous types of wetlands, including open-water, fringe, emergent, and playa, are present in Bear River Bay and Willard Bay Reservoir in the northeastern part of Great Salt Lake.

About the Author - Richard Emerson Richard L. Emerson is a geologist in the UGS Groundwater and Paleontology Program, where he has worked since 2007. His duties include geographic information system (GIS) analysis and mapping of wetland, shallow-groundwater, and aquifer data throughout the state. He is currently working on wetland projects in Snake Valley and Great Salt Lake.

About the Author - Toby Hooker Toby Hooker has been a Wetland Scientist with the UGS’s Groundwater and Paleontology Program since 2010. His work focuses on developing methods to assess the health of wetlands around Great Salt Lake and correlating ecosystem health with wetland hydrologic monitoring in Utah’s west desert.

Located on the Pacific Flyway, Utah’s Great Salt Lake is one of North America’s most important waterways. The peripheral wetlands of Great Salt Lake serve as critical nesting areas and feeding grounds for millions of migratory birds. At least 250 avian species breed or stop to feed here on their annual migrations. Half of the world’s population of some species, such as the Wilson’s phalarope, rely on the lake’s wetlands each year. However, despite the international importance of the wetlands that support these birds, little has been done to maintain a spatial record of the Great Salt Lake ecosystem.

Scientific study has become increasingly reliant on geographic information systems (GIS) to process complex environmental information, and wetland studies are no exception. Essential wetland information, such as water characteristics, vegetation, and landform type stored in a GIS database, provides critical knowledge for evaluating wetland health and change over time. The most widely distributed wetland classification for the United States is the National Wetland Inventory (NWI), which includes the Great Salt Lake area. However, the NWI has been updated very little since its release in the 1980s. Also, with a dependence on vegetation, water depth, and inundation period, the NWI is well suited for environments such as tidal estuaries where predictable vegetation and water patterns exist but is not well suited to the highly variable environments of Great Salt Lake wetlands.

As a terminal water body, Great Salt Lake water levels respond to climatic variations on multiple time scales affecting vegetation and water inundation period. Water levels can fluctuate by as much as 4 feet from fall to spring and commonly fluctuate 10 feet or more on decadal scales. An extreme change in water level can dramatically alter the wetland landscape of Great Salt Lake as it did in 1987 when the lake surface reached its historical high of 4212 feet above sea level. In some locations this rise resulted in a shoreline shift of 20 miles relative to the shoreline during the lake’s historical low of 4191 feet in 1963. This surface area increase of 40 percent inundated over 1300 square miles of previously exposed mudflats, playas, and vegetated wetlands, flooding waterfowl management areas and structures near the lake and spurring the State of Utah to build a multi-million dollar pumping system to expel lake water into the west desert in an effort to evaporate it. The saline water of Great Salt Lake kills most vegetation and infuses the soil with salt, hindering plant growth for years after the water has receded.

We reclassified the 210 unique wetland classes for Great Salt Lake provided by the NWI by grouping classes having similar characteristics into seven new classes. The new classes consider geomorphic features, water sources, and directional movement of water through wetland areas. Auxiliary information from the NWI dataset was retained, such as excavated areas (canals) or impoundedwater (waterfowl ponds), and we added other information and features such as evaporation ponds from the current water-related land-use coverage provided by the Utah Division of Water Resources.

Through field checking the results at Bear River Bay, we determined that the new classes are approximately 76 percent accurate. We attribute most of the error to change in the wetlands as they responded to a lowering of Great Salt Lake water levels since the 1980s. The seven classes are intended to be clearly determined in the field or from aerial photos and elevation data so that corrections to a wetland study area are quick and repeatable.

We anticipate that this new wetland classification method will be useful to agencies that need Great Salt Lake wetland GIS data. The data are expected to be released soon and made available through the Utah Automated Geographic Reference Center (AGRC). We expect to continually revise the dataset as high-resolution elevation data and aerial imagery become increasingly available to aid mapping efforts of Great Salt Lake wetlands.