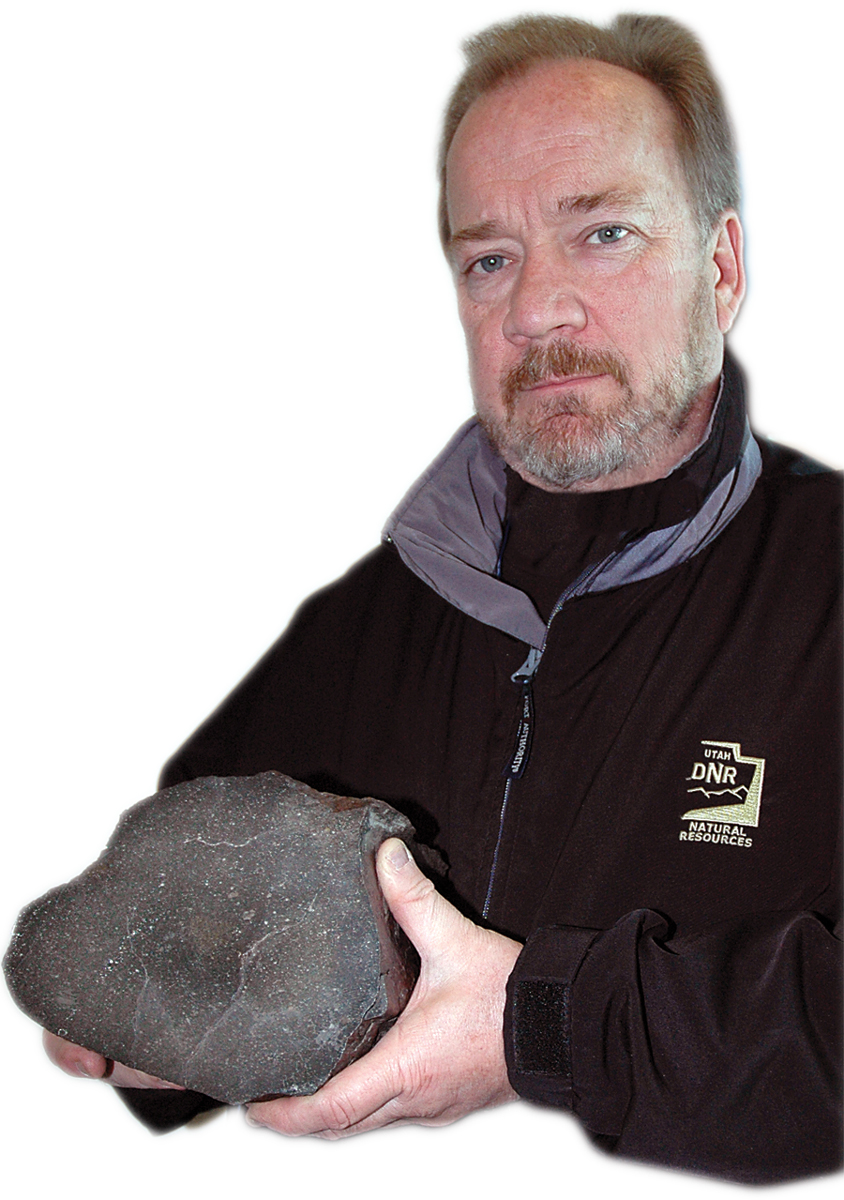 The Gunlock Meteorite, held by Michael Laine, displays the characteristic fusion crust formed during entry into the Earth’s atmosphere. 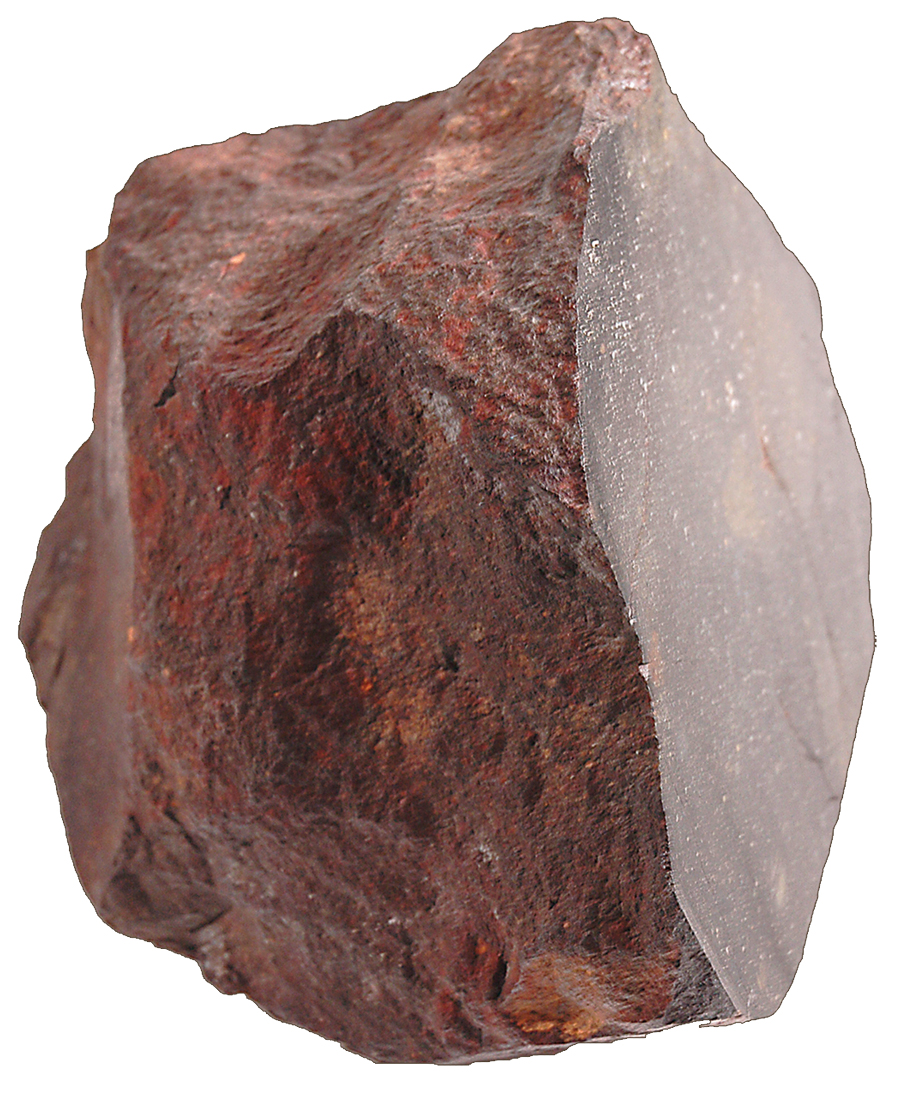 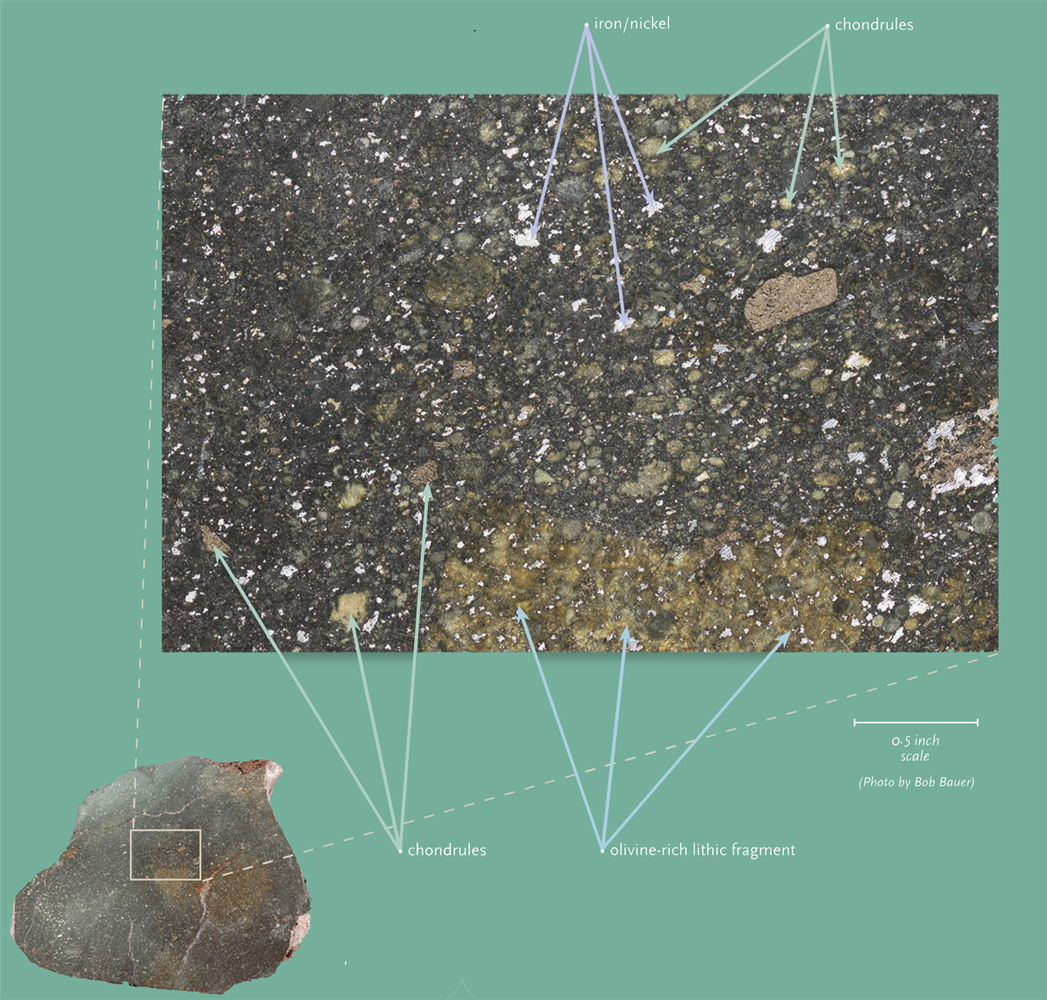 Meteorites are important because they are samples of asteroids, comets, or planets and are among the only rocks that provide geologists with “ground truth” information about the nature of solar-system bodies other than the Earth.

The Gunlock Meteorite is a chondrite, a particular group of stony meteorites that derives its name from the Greek word for “seeds.” The name alludes to the meteorites’ distinctive texture characterized by small grains called chondrules. Current theories concerning the origin of chondrites suggest they are related to the birth of the sun in a contracting disk of spinning interstellar dust and gas clouds called a solar nebula. As the sun ignited, interstellar dust in the nebula melted and condensed into droplets or chondrules of silicate minerals like olivine and pyroxene, which are also found in many igneous rocks on Earth.

As soon as the chondrules started forming they began clumping together with the remaining dust and gas in the solar nebula, forming a primitive cosmic sediment of silicate minerals, metals like iron and nickel, and simple organic compounds, as well as diamond dust and heavy elements seeded into the nebula by nearby exploding stars or novas. In time, this cosmic sediment grew from pebble-sized rocks to boulders, asteroids several hundred miles across, and occasionally into even larger objects like planets.

The present-day asteroid belt between Mars and Jupiter is a collection of leftover chondritic material that did not become part of a larger planet. Collisions between asteroids knock off pieces that occasionally fall to Earth as chondritic meteorites.

Chondritic meteorites are among the most exciting rocks available for scientific study. The age of chondrites, determined by the radioactive decay of constituent elements, is an amazing 4.5 billion years—older than any other known rocks on Earth. Although Earth probably formed about the same time, geologic processes have constantly recycled the rocks on its surface. Because chondrites retain their primitive texture and composition, they are the only rocks that can actually be traced back to the birth of the solar system.

Mr. Don Adair, of Boise, Idaho, discovered the Gunlock Meteorite on June 22, 1982, while mapping the geology of the Goldstrike mining district in Washington County. A quick survey of Padre Hill, where the meteorite was found, yielded a second meteorite fragment about 150 feet away. The two fragments fit together, indicating they were originally one piece. This past winter, Mr. Adair graciously donated one of the fragments to the UGS where it can be seen on permanent display in the Natural Resources Map & Bookstore.