What are keeper potholes & how are they formed? 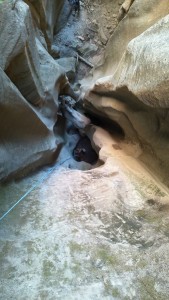 A canyoneer descending into a dark keeper pothole in Boundary Canyon, a tributary of Kolob Creek, Zion National Park. 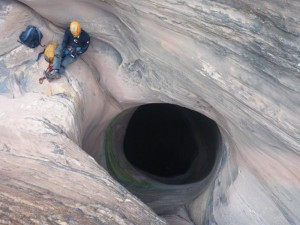 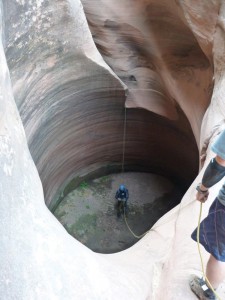 Keeper potholes are found in slot canyons. In the recent decades “slot” canyoneering has become a major sport, and very few areas of the world have nearly the number or diversity of slot canyons as southern Utah.

Many clubs, organizations, and websites have been created to aid people in sharing route descriptions, pictures, videos, and techniques for descending the various canyons. A rating system similar to that of sport climbing has even been devised to rate the difficulty of the slot canyons based on factors such as:

Potholes, which are smooth, bowl-like hollows eroded in bedrock, are common features in slot canyons and form as a result of a number of different geologic processes. A pothole becomes a “keeper pothole” when it is sufficiently deep and smooth so as to “keep” those who descend into it from being able to easily get back out.

These are major obstacles when they block the entire width of the slot canyon, forcing canyoneers to descend into the pothole and devise a strategy to ascend back out the other side. Keeper potholes can be especially dangerous when they are only partially full of water—often forcing those foolhardy souls who rappel or jump into them to tread water as they attempt to set or drill climbing anchors into rock to get back out.

Some keeper potholes exist at the bottom of a long rappel in very dark and winding slot canyons. In these instances canyoneers might not know a keeper pothole is below them until they rappel into it and find themselves seemingly trapped, swimming in a cold, deep pool of water.

Stream channel bedload: Keeper potholes form predominately in streams where just the right amount of sand, gravel, and rocks can be swirled within the eddies of a stream channel. These rotational currents create a vortex which can spin a large amount of debris from the bedload like a giant drill-bit, eroding out depressions in the bedrock of the canyon floor.

When the flow rate is high enough to mobilize the bedload of keeper potholes, the abrasive grinding sound has been known to be audible to those nearby. For the stream to deepen the pothole, it is essential that the flow’s carrying capacity be capable of mobilizing nearly the entire bedload. If the size of rocks and debris in the bedload exceeds the flows carrying capacity, the channel’s potholes will fill up, prohibiting active erosion. If the channel has little to no bedload the flow will lack the abrasive material needed to rapidly “drill” into the channel.

Canyons with keeper potholes usually have a delicate balance between stream capacity and bedload volume which keeps debris constantly filling up and emptying out of the potholes from one season or flood to the next. This is one of the reasons that most of Utah’s deepest keeper potholes form on the steeply tilted rock strata of San Rafael Swell or Waterpocket Fold in Capitol Reef National Park and the high hanging canyon areas of Zion National Park where there are no highly resistant rock units upstream to choke the stream channel with large, hard boulders.

Stream channel shape and rock type: In Utah, keeper potholes are common in cliff-forming sandstone units such as the Navajo Sandstone, Wingate Sandstone, White Rim Sandstone, and Entrada Sandstone. Potholes often form away from water channels, but tend to be deeper, steeper-sided, and more prevalent when they form within winding water channels subject to flash flooding.

The shape or morphology of the stream channel is important because a bending or winding stream channel is more likely to create the fluvial eddies that facilitate pothole formation. Drop-offs or waterfalls, caused by vertical changes in rock density, are notable contributing factors for the same reason.

The general density and cohesive strength of the rock unit is also important. For deep keeper potholes to form, the rock unit must be soft enough to be eroded by the debris-laden flow, but hard enough to maintain near vertical faces without crumbling or collapsing.

Cementation characteristics: Once a depression in the bedrock has been deepened enough to retain standing water, the slightly acidic stream or rainwater begins to dissolve the calcite cement that holds the grains of sandstone together. Other more complicated biological processes also work to dissolve the rock cementation (see “Glad You Asked,” Survey Notes, 2007, v. 39, no. 3, p. 11).

Both syndepositional (occurring at the time of sediment deposition) and diagenetic (occurring after deposition, but before exposure) processes can greatly affect cementation characteristics. When the sand in sandstone is first deposited, interspersed fine-grained silts and clays can inhibit the migration of calcium- and carbonate-laden groundwater that carries the cement to “glue” the grains of sand together. These fine-grained deposits can create pockets of poorly cemented or even uncemented sandstone, which erode much more easily than cemented sandstone.

After deposition, hydrothermal fluids (naturally heated fluids that circulate through the ground) or soft-sediment deformation (sediments deformed during or shortly after being deposited) may also play a role in creating pockets of poorly cemented or uncemented sandstone in the rock units. These cementation characteristics, as well as the shape of the stream channel, type of rock unit, and character of the channel bedload, all combine to create the potholes and keeper potholes of southern Utah’s slot canyons.