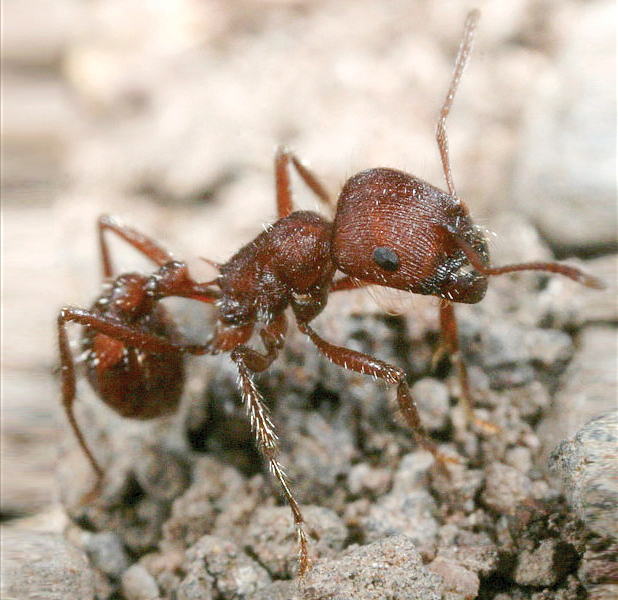 An ant does not necessarily have an affinity for gold; to her it is just another fragment of earth to transport when constructing tunnels, chambers, paths, and nest cones. Gold is one of the heaviest elements, nearly twice the density of lead. Still, ants can lift or drag many times their weight and at today’s gold prices taking a nugget from her could pay for your lunch.

Gold-digging ants have persisted in the Western tradition since the 5th century B.C. writings of Herodotus, and later Pliny the Elder. In Herodotus’ The Histories, giant ants in the vicinity of modern Afghanistan were said to mine gold dust that people would collect from their mounds. Although Herodotus’ story is not entirely factual, ants are premier miners and to geologists “the world’s oldest prospecting tool.”

Soil covers most of Earth’s dry land, cloaking bedrock. Ants, hauling up subterranean material and gathering weathered bits of rock and minerals from their territory for deposit on the colony mound, can provide a window into the subsurface. Thanks to the ant’s undertakings, prospectors have discovered rich lodes of gold, copper, nickel, turquoise, diamonds, and many other minerals and gemstones.

Most ants do not build above-ground nests or true mounds that have living quarters, but some species of the New World harvester ants (e.g., Pogonomyrmex sp.) are a remarkable exception in the American West. Some harvester ant species will build conspicuous, pebbly mounds. These ants are known to forage items of uniform size from many yards away and place them on their nest cones to armor and acclimatize the nest—likely to protect the mound from wind and rain erosion and to increase solar heating and retain water vapor.

The conical mound of the western harvester ant (P. occidentalis) is typically about a few inches to more than a foot high, has an average volume of about a cubic foot, and can be 3 feet or more in diameter. The size of the pebbles used, consistent with their mandible spread, is about 0.1 to 0.2 inch (2–6 mm) and they may carry up to about half a carat items (0.0035 ounce).

The mound itself is typically oriented— the long or shallow slope faces southeast to capture the energy of the morning sun, and the mound entrance is on the southeast in more than four of five mounds in southern Utah. The nest cone exterior is built of prudently selected pebbles, but can include dirt pellets, shells, charcoal, dried bits of vegetation, human artifacts (especially near roads), and of course gemstones and precious metals when in proximity to these deposits.

Harvester nests have a circular zone free of vegetation ringing the mound, called an ant disk or yard, which can be small or more than 25 feet in diameter. Often radiating from the disk are some three to eight cleared trunk trails or the “ant highway system.” Visible on the landscape from high above, estimates from aerial photographs indicate these barren disks can occupy up to 2 percent of the total ground surface in semi-arid climates.

Ant mounds have long been a practical tool in locating diamond-bearing kimberlites—upper mantle-derived igneous rocks with a vertical structure—around the world. Diamond indicator minerals up to 0.2 inch (6 mm) have been found on ant mounds in the Green River Basin in Utah and Wyoming that originated from the Bishop Conglomerate, sourced from the Uinta Mountains, including ilmenite (titanium-iron oxide), pyrope and almandine garnet, chrome diopside, and spinel. Despite the occurrence of these minerals, it is currently believed unlikely that diamonds developed in this area.

A rancher in Manila, Utah, had reported finding “rubies” on anthills as far back as the 1950s, which were later identified as pyrope garnet. The Four Corners region is known for the “Ant Hill Garnet” or “Arizona Ruby,” a pyrope garnet gemstone that is novel in being hand-picked from harvester ant mounds. The pyropes, derived from diatremes or volcanic pipes in the Navajo volcanic field, have an attractive, dark-red color and when moved by ants are less than a carat in weight—a perfect size because any more than a carat darkens the red color.

Ants were integral in debunking “The Great Diamond Hoax of 1872.” Investigating the story of a diamond discovery in northwest Colorado near Diamond Peak, Clarence King, the first director of the U.S. Geological Survey and the namesake for Utah’s highest point, Kings Peak, noted harvester ant mounds as one line of geologic evidence proving the diamond field was fraudulent. King’s team observed artificial holes in the mounds, as if gemstones had been pushed into the nest. If there were no holes or footprints or otherwise disturbed ground near an ant nest, no gemstones were present. King’s conclusion: the area was salted with garnets, rubies, sapphires, diamonds, and other precious gemstones to scam investors.

The con even duped a prominent mining engineer of the time who first investigated the area. The northwest Colorado location was close to King’s Geological Exploration of the Fortieth Parallel survey, and an oversight of diamonds would be a bruise to the expedition team’s reputation. King and his government team were compelled to investigate and in doing so blew the cover of one of the most notorious swindles in American history.

Ants also like to decorate their mounds with bones and teeth. One harvester ant mound contained over 1,100 modern-day bones from at least nine species of small mammal. Paleontologists use harvester ant mounds to efficiently collect fossils. The ant hill method can increase bone collection rates by more than 40-fold. Besides fossil collecting, ant mounds assist in pinpointing subterranean bone beds through surface sampling of nests to calculate and compare ant mound fossil density.

So, the next time you come across an anthill, take a closer look at the surface and see what the ants have chosen for construction. Remember to watch your feet, too, as ants will swiftly muster. The harvester ant (Pogonomyrmex sp.) reputedly possess the most venomous sting of any insect, and if you are prone to allergic reactions, or even if you are not, always carry medication that arrests anaphylaxis.