Where is the COOLEST Spot in Utah? 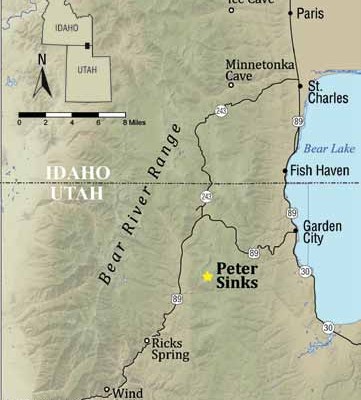 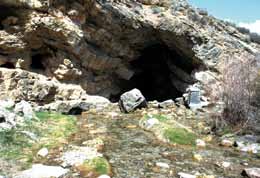 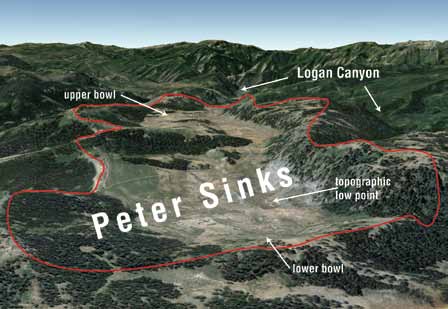 Among all the cool places in Utah, the coolest by far is Peter Sinks. High in the Bear River Range in Cache County, Peter Sinks is frequently the coldest place in the United States in wintertime, even colder than anywhere in Alaska. Peter Sinks holds the second-place record—less than half a degree shy of the all-time record at Rogers Pass, Montana—for coldest recorded temperature in the contiguous United States at -69.3°F set on February 1, 1985.

Separate readings were taken by automated instrumentation and two Utah State University students using alcohol thermometers (mercury freezes at about -38°F). Summer at Peter Sinks can be chilly, too; a low of 3°F was noted in June 2001. Peter Sinks also has had extraordinary ranges of temperature—swings of nearly 80°F in a few hours, and more than a 28°F change in nine minutes.

Why is a place nearly 500 miles south of Canada so unduly cold? The cause is a combination of high elevation, dry air, and topography. Peter Sinks is a collection of sinkholes, a product of the underlying geology, that form a bowl-shaped depression surrounded by ridges hundreds of feet higher than the low point. Peter Sinks creates its own microclimate due to the concentration and retention of cold air.

Cold, dry air is the heaviest kind of air. It pours into and ponds in the bowl, with nowhere to escape until the air spills over the lowest lip of the ridgeline of the topographic depression. As long as there is no wind to mix the atmosphere, cold air fills Peter Sinks. This condition is called “cold-air pooling,” an occurrence all too familiar to residents of the Wasatch Front and Cache Valley, who endure intense winter temperature inversions when colder air fills the valleys, trapping in air pollution.

Peter Sinks is two connected depressions, an upper bowl and a lower bowl, forming an elongated basin about 2 miles long and half a mile wide perched 2,000 feet above upper Logan Canyon. Grasses, shrubs, and herbs grow on the floor of Peter Sinks where it is too cold for trees to grow, yet trees grow farther up on the sides and rim of the bowl, an example of an “inverted treeline.” This is because temperatures are much higher along the sides and rim of Peter Sinks, particularly at night.

Rock type, tectonics, and chemical weathering are responsible for numerous sinkholes in the Bear River Range. These sinkholes form when the ground surface caves in above underground voids dissolved out of the carbonate rocks. Past compressional and ongoing tensional forces have played a role in forming the Bear River Range and the high, elevated, fault-bounded basins that the sinks occupy.

These basins, lacking a surface drainage outlet, enhance chemical weathering of the rock through the concentration and retention of water at topographic low areas (analogous to cold-air pooling). Water drainage out of the sinks is subterranean.

The U.S. record low temperature may yet fall to Peter Sinks. Utah State University’s Utah Climate Center, with support from Campbell Scientific of Logan, installed a monitoring station in 2009 as part of the Peter Sinks Temperature Monitoring Project (information found online at http://twdef.usu.edu/Peter_Sinks/Sinks.html). The station provides continuous temperature and wind speed data at the bottom of the sinks and higher up on the rim of the sinks. Previously, the sinks had only sporadic measurements, so now an accurate portrayal of temperature patterns and extremes of Peter Sinks will soon come to light.