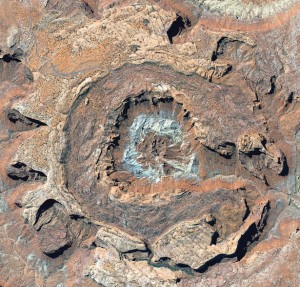 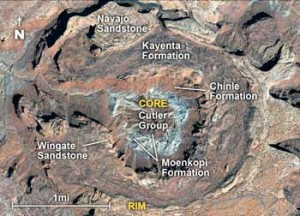 Upheaval Dome in Canyonlands National Park, Utah, is a colorful circular “belly button,” unique among the broad mesas and deep canyons of the Colorado Plateau.

The rim of Upheaval Dome is 3 miles across and over 1000 feet above the core floor. The central peak in the core is 3000 feet in diameter and rises 750 feet from the floor.

Since the late 1990s, the origin of the Upheaval Dome structure has been considered to be either a pinched-off salt dome or a complex meteorite impact crater; in other words the “belly button” is either an “outie” (dome) or “innie” (crater).

Both origin hypotheses account for the overall structure of Upheaval Dome, assuming approximately a mile of overlying rock has been eroded. The main differences between the two hypotheses are the amount of time and the pressures needed to produce the structure.

A salt dome is produced when a subsurface layer of salt (originally deposited when a large body of saline water evaporated) is eventually squeezed upward because of the weight of overlying rock. At Upheaval Dome, the upward flow would have to have been “pinched off” by rock that fell into voids left by salt dissolved by surface water.

The pinched-off salt dome hypothesis assumes that up to 20 million years of moderate pressures produced the feature, compared to only a few minutes of extremely high to low pressure changes for the impact crater hypothesis.

Until recently, “smoking gun” evidence for either origin was absent because of erosion. No remnant pieces of salt or related rocks and minerals have been found to support the pinched-off salt dome hypothesis; neither were formerly molten rocks, ejected and crushed rock, or minerals altered by high pressure found to support the impact crater hypothesis.

Then, in 2007, German scientists Elmar Buchner and Thomas Kenkmann reported finding quartz crystals that were “shocked” by the high pressure of a meteorite impact. Many geologist now consider the mystery of Upheaval Dome’s origin to be solved (and it’s an “innie”!).

The core consists of the oldest rock formations at Upheaval Dome. The Organ Rock Shale and White Rim Sandstone of the Permian Cutler Group, and Triassic Moenkopi Formation were injected and pushed upward in a chaotic jumble. The Triassic Chinle Formation, Triassic-Jurassic Wingate Sandstone, and Jurassic Kayenta Formation and Navajo Sandstone are stacked, oldest to youngest, from the core to the rim.

Enjoy the picnic ground at Upheaval Dome and take the short but steep overlook trails, or, if you are an experienced, well-prepared hiker with about eight free hours, take the Syncline Valley trail. There is signage with trail directions and mileage.