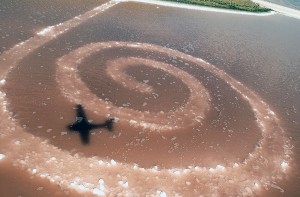 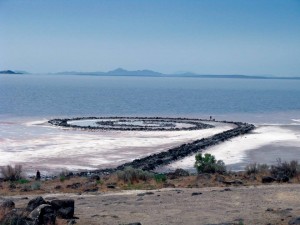 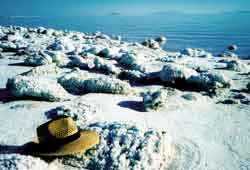 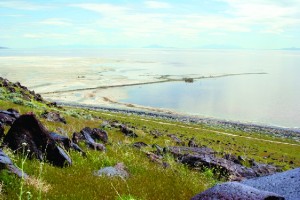 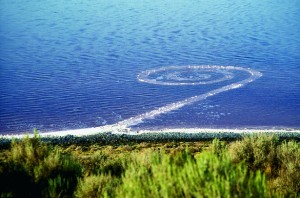 Artist Robert Smithson created Spiral Jetty in April 1970 and later donated the earthwork art to the Dia Center for the Arts in New York.

The water’s pink color is due to a red pigment in the salttolerant bacteria and algae that survive in the north arm’s extreme 27 percent salinity.

Great Salt Lake was split into two parts by a rock causeway constructed across the lake by the Southern Pacific Railroad in 1959. Before the causeway was built, fresh water from the Bear, Weber/Ogden, and Jordan Rivers circulated throughout the entire Great Salt Lake.

When the causeway was built, circulation became restricted and salt content of the north arm increased because most of the river water flows into Gilbert Bay (the south arm).

White salt crystals encrust almost any solid object in contact with north-arm water. The black basalt boulders Smithson took from the beach to construct Spiral Jetty are no exception; they are now covered with salt crystals. The basalt boulders are from local volcanic eruptions during Pliocene time, about 5 to 2 million years ago.

Spiral Jetty surfaced several times between 1970 and 2002. Throughout the lake-level fluctuations Spiral Jetty survived wave erosion; the hard salt crust probably cemented the boulders together and provided a protective layer on the jetty surface.

Once at GSNHS take the gravel road leading west toward the West Side Drive approximately 6 miles (9 km) to an intersection that has a small white “Promontory Ranch” sign.

Take the south (left) road from the “Promontory Ranch” sign intersection and continue south about 1 mile (1.5 km) to an intersection near a corral; veer right to the road that heads southwest and continue about 9 miles (13.5 km) to Great Salt Lake at Rozel Point. You will see a linear jetty associated with past oilfield activity, and, if the water is low enough, the Spiral Jetty.