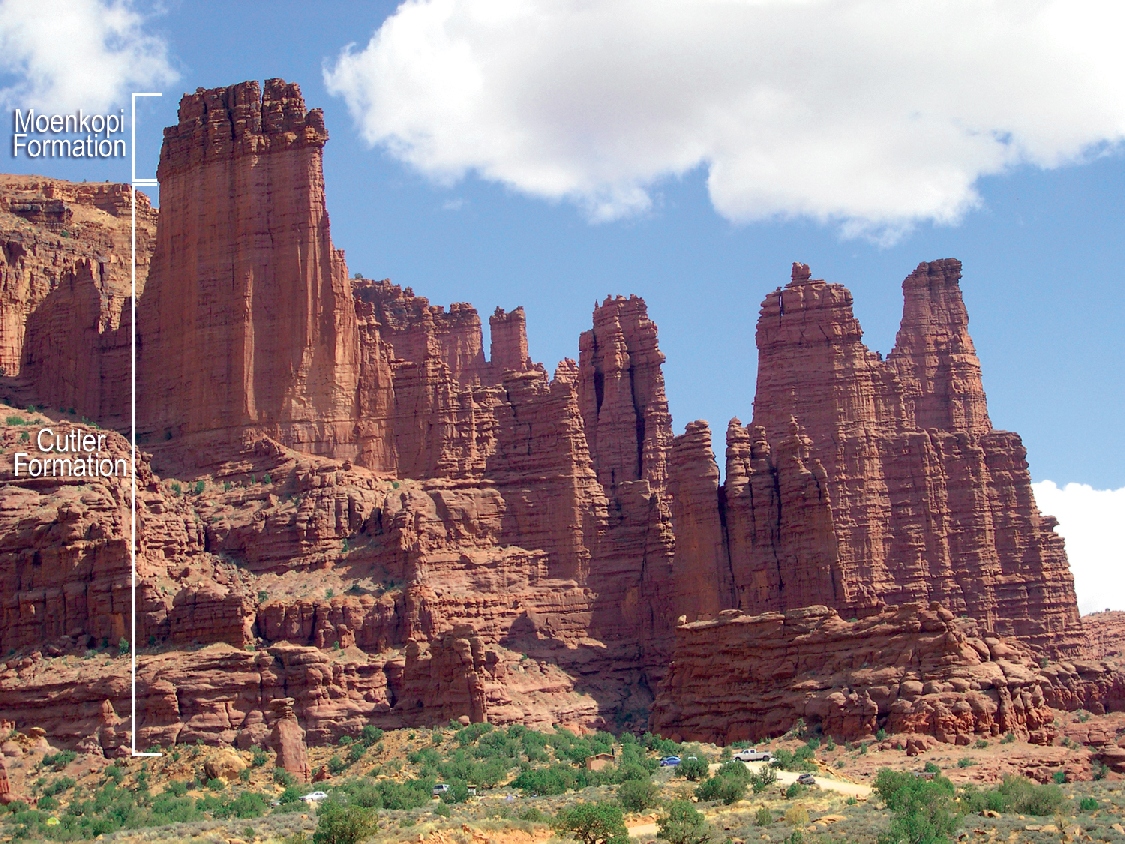 Fisher Towers seen from the road leading to the trailhead. The lower and middle parts of the towers are the Cutler Formation. The lower member of the Moenkopi Formation forms the upper darker part. 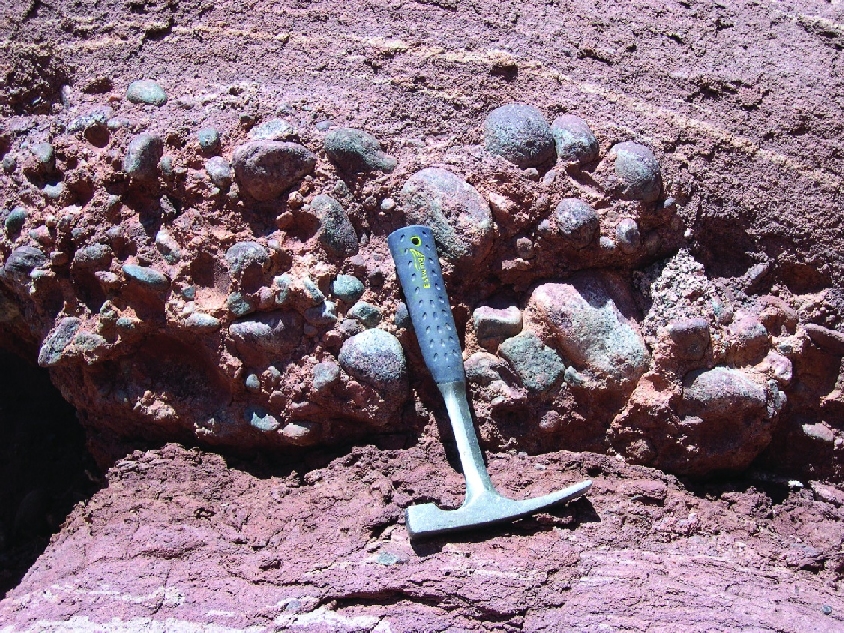 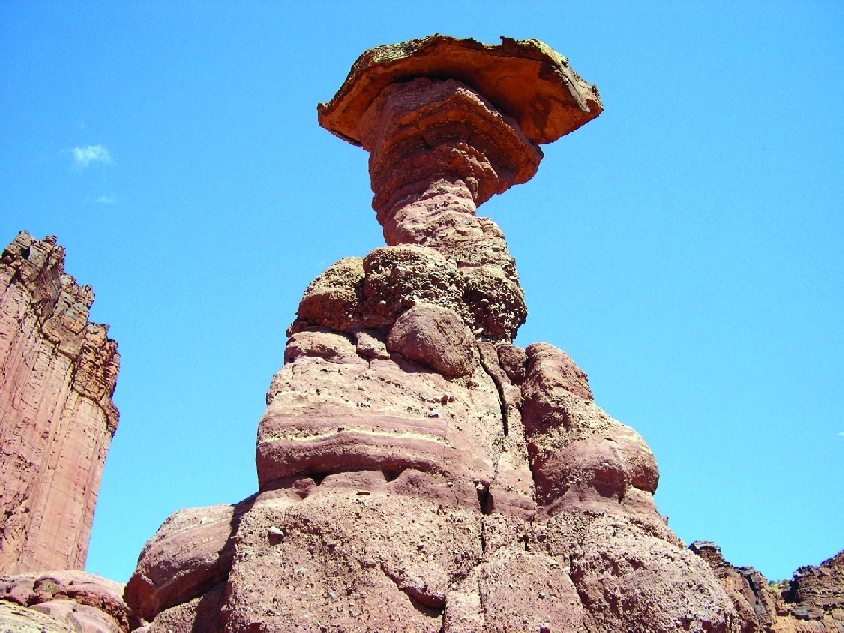 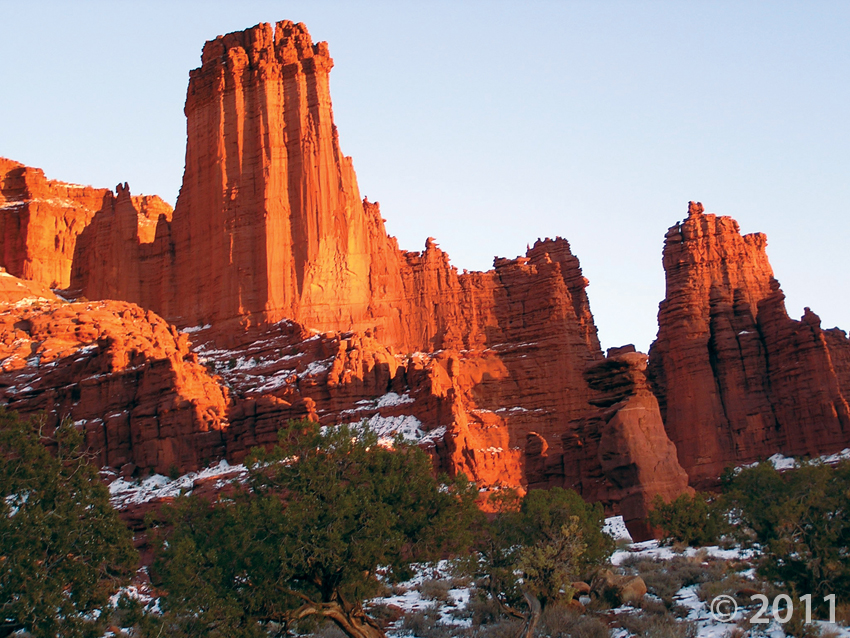 Fisher Towers, located about 20 miles northeast of Moab in southeastern Utah, is one of the most scenic landscapes along the Colorado River.

Administered by the Bureau of Land Management, Fisher Towers Recreation Site is a popular destination for hikers and rock climbers. A moderate 2.2-mile (one way) hiking trail takes you along the base of the towers and spires to a scenic overlook of Professor Valley and the Colorado River.

Fisher Towers contains layers of sedimentary rock in various shades of red-brown, red-purple, and maroon. The colors are a result of varying amounts of hematite (an iron oxide).

The middle and lower parts of the towers are sandstone, mudstone, and conglomerate of the Permian Cutler Formation (approximately 290 million years old).

The conglomerate contains sub-rounded to rounded cobbles and pebbles of quartz, feldspar, mica, granite, schist, and quartzite that were eroded from nearby Precambrian (over 1 billion years old) metamorphic and igneous rocks.

These rocks originated from the Uncompahgre highland, a mountainous region that formed at the beginning of the Pennsylvanian period (approximately 320 million years) in western Colorado and eastern Utah.

At Fisher Towers, erosion continues to sculpt the towers, spires, and pedestals. One area, approximately one mile from the start of the trailhead, contains several rock pedestals capped by large sandstone slabs of the Moenkopi Formation. These rock slabs fell from the cliffs high above.

The sandstone, more resistant to erosion than the softer underlying layers of the Cutler Formation, protects and preserves the soft rock underneath, creating rock pedestals.

In a similar manner, the Moenkopi Formation has provided a resistant cap for some of Fisher Towers, allowing erosion to carve the awe inspiring spires and towers that we see today.