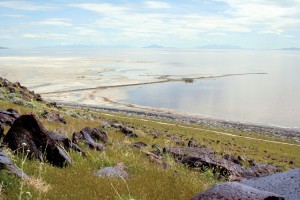 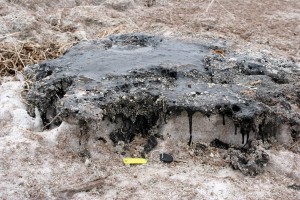 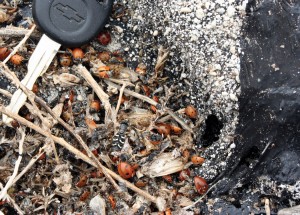 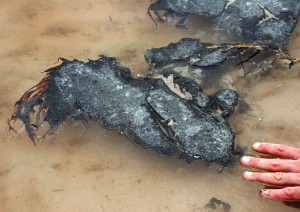 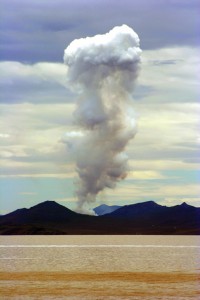 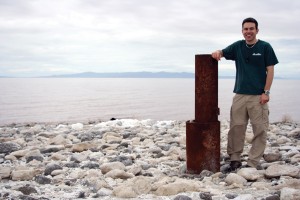 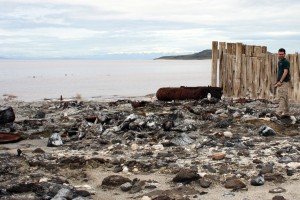 Geologic Information: “An’ up through the ground came a bubblin’ crude. Oil that is, black gold, Texas tea.” A crude oil-seep made Jed Clampett of the 1960s TV sitcom The Beverly Hillbillies a millionaire. In Utah you can see, smell, and feel natural crude oil-seeps at Rozel Point when Great Salt Lake levels are low.

From these source beds, the oil migrated upward along faults and fractures to an 80- foot-deep, 2- to 3-foot-thick porous basalt layer that comprises the main reservoir. Some of the oil in this basalt reservoir leaks to the surface through faults and fractures, emerging as thick, sticky, tar-like oil.

Rozel Point may not be the place to take a first date. In the August 1995 issue of Survey Notes, Thomas Chidsey writes of “crude oil dripping from abandoned wellheads, tar on rocks and beach sands, and dead pelicans along the beach…”

The wellheads have since been capped, but rusting industrial debris remains. The sweet perfume or retched stench of crude fills your nose. And, you can occasionally see, hear, and feel the U.S. Air Force test weapons in the Lakeside Mountains across Gunnison Bay to the west. (UPDATE: The debris has been cleaned up! Read our GeoSights article, Rozel Point and Spiral Jetty Revisited.)

On the other hand, graceful flocks of pelicans flying by and distal views of the lake and mountains can inspire awe and wonder. The red brine, white salt, and black basalt impart an otherworldly feel. And the economic potential seeping from the ground creates an air of excitement. Perhaps it is because of, not in spite of, these dichotomies that artist Robert Smithson chose to locate his Spiral Jetty earthwork in this area, just a few hundred yards to the northwest of Rozel Point.

The oil seeps at Rozel Point appear when the lake level drops below an elevation of approximately 4198 feet, roughly the elevation at which the Spiral Jetty emerges. The U.S. Geological Survey web site (http://ut.water.usgs.gov/infores/gsl.intro.html) provides current lake-level information.

How to get there: Drive to the Golden Spike National Historic Site (GSNHS), 30 miles west of Brigham City, Utah by following signs on Utah State Route 83 through Corinne. From the GSNHS Visitor Center follow the small white signs toward the Spiral Jetty, about 16 miles.

When you see a rusted military amphibious vehicle, you are almost to Rozel Point. The oil seeps can best be seen from the long linear jetty found a few hundred yards southeast of the Spiral Jetty. Detailed directions are found in the Spiral Jetty GeoSight.

For more information see the article on the Rozel Point oil field in Great Salt Lake, an Overview of Change (2002) edited by J. Wallace Gwynn.