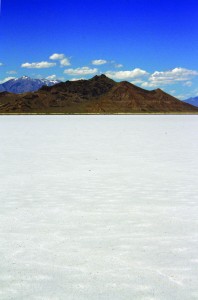 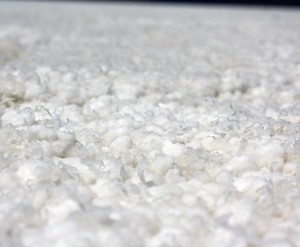 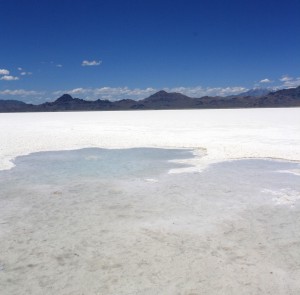 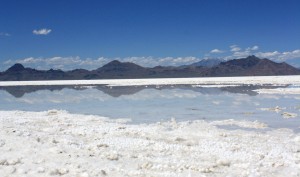 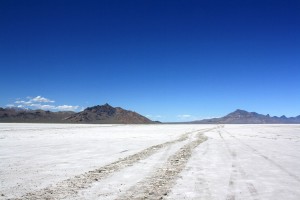 Often called the flattest place on earth, the Bonneville Salt Flats is a favorite surface for high-speed automobile racing. Racing began on the salt flats in 1914 and numerous land-speed records for various vehicle classes have been set here. The Bonneville Salt Flats also hosts rocket club launches and marathons and acts as a backdrop for movies, commercials, and photographs. This landscape is a place of expansive views, distinctive scenery, and sharp contrasts.

The Bonneville Salt Flats is located in northwestern Utah within the western part of the Great Salt Lake Desert near the Utah-Nevada border and is mostly managed by the U.S. Bureau of Land Management (BLM). Interstate 80 (I-80) divides it into northern and southern halves with the north side including the motor-sport racetracks and sightseeing areas and the south side containing commercial potash operations.

Geologic Information: The Bonneville Salt Flats lies on what was once part of the floor of the ancient, freshwater Lake Bonneville that occupied western Utah during the last ice age. Lake Bonneville shorelines can be seen as flat wave-cut benches or terraces on the sides of the Silver Island Mountains to the north-northwest of the salt flats. The salt crust began to form as Lake Bonneville dried up to become Great Salt Lake.

Because the Bonneville Salt Flats is within a closed basin (no drainage outlet), water can only escape by evaporation or seepage into the ground. The area’s shallow groundwater transports salts in the subsurface—the salty water is then wicked to the surface, dries, and leaves behind a salty crust. Surface water runoff and precipitation also add small amounts of salt onto the flats. Flooding in the winter can dissolve the salt crust, and as temperatures rise in the summer, salt re-precipitates on the flats as the water vaporizes.

Potash, a mixture of potassium-bearing salts mostly used in fertilizers, was first mined from the shallow-brine aquifer beneath this area in 1917 with continuous production since 1939. The brine (a combination of dissolved salts and water) is collected in open ditches on both halves of the salt flats and directed to a series of solar evaporation ponds on the south side. The potash is then separated out, processed, and loaded into railcars or trucks for shipment.

How to get there: From Salt Lake City, travel on I-80 West toward Wendover, Nevada. Rest areas at about mile marker 10 on both sides of the interstate have great views of the Bonneville Salt Flats. To get a closer look, continue traveling on I-80 West and take exit 4 (Bonneville Speedway). Turn right (north) onto Leppy Pass Road, continue about 1.2 miles, turning right (east) onto the Bonneville Speedway access road. Drive almost 4 miles to the cul-de-sac at the end of the pavement where there is parking.

The BLM Bonneville Salt Flats travel advisory warns that if you decide to leave the access road and drive onto the salt flats, travel is at your own risk. The BLM recommends avoiding the mud flats (light brown) that surround and underlie the salt flats (white) and staying on the clean, white salt surface as much as possible as vehicles can easily sink and become stuck in the soft, wet mud. More than one tow truck has become stuck trying to pull vehicles out of the muck. If you do have an emergency on the salt flats, contact the Tooele County Sheriff Dispatch office at 435-882-5600.