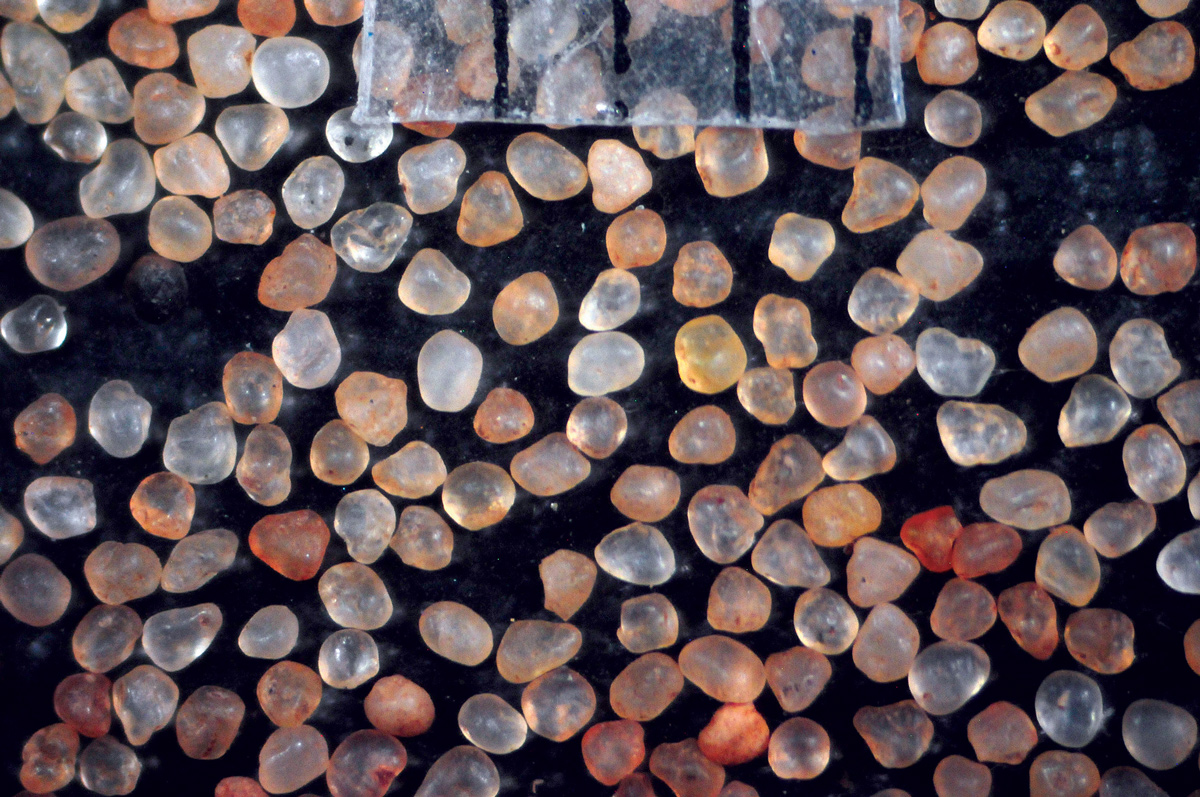 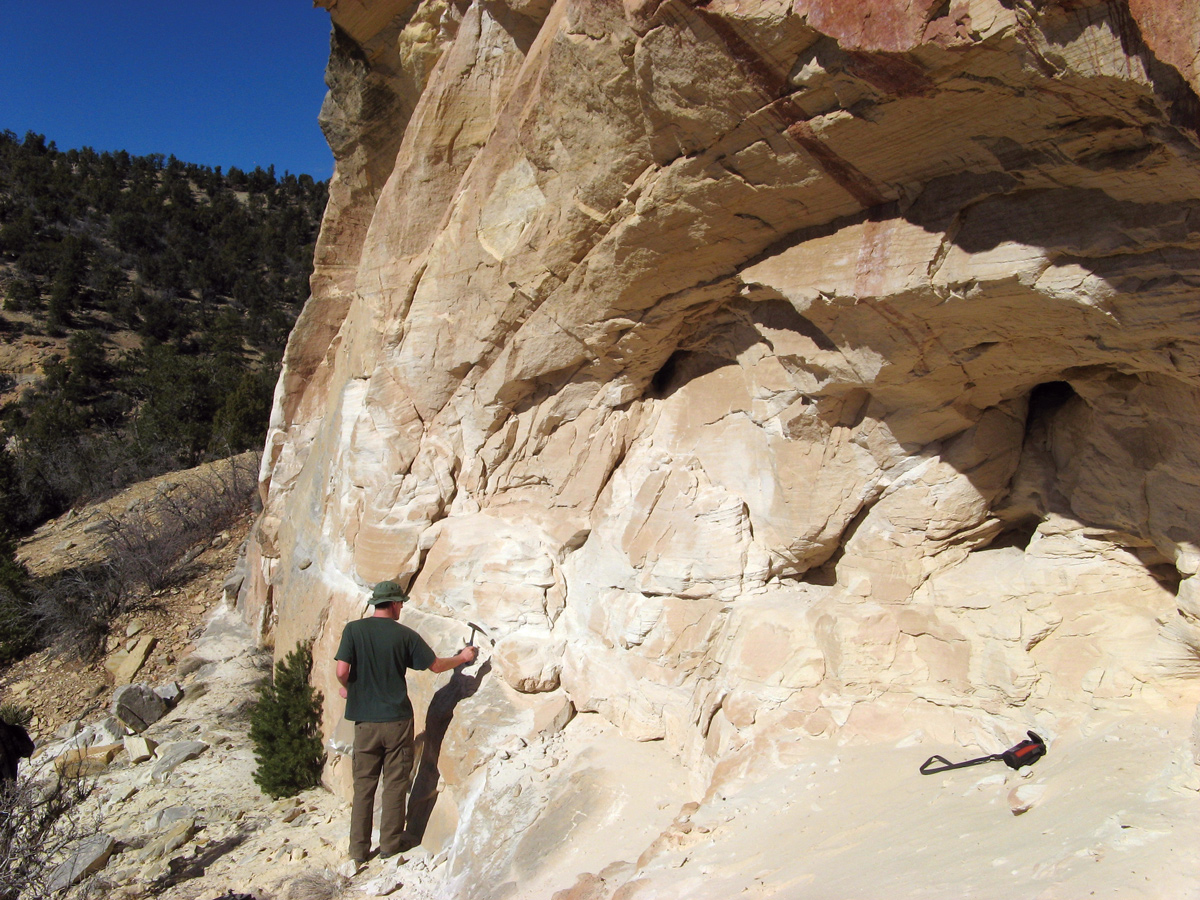 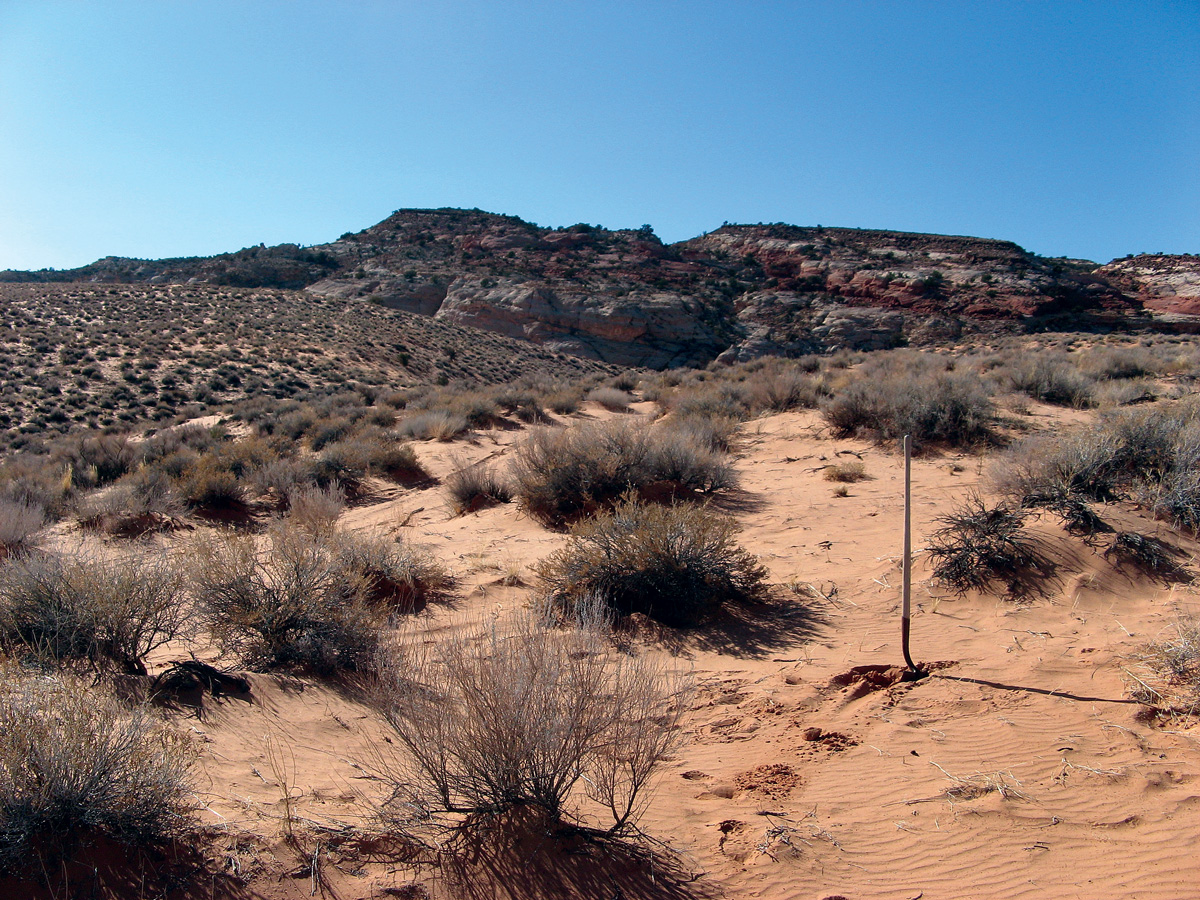 In recent years, hydraulic fracturing (or “fracking”) has become a widespread technique for extracting previously unrecoverable oil and gas from low-permeability rock formations. During hydraulic fracturing, fluid is pumped into a well at high pressure in order to fracture the rocks containing oil or gas, thereby releasing the hydrocarbons. An important component of the fracturing fluid is proppant, a material that “props” open the fractures allowing the oil or gas to be pumped out. Frack sand (or ”frac sand,” as it is known in industry) is the most common proppant used in the oil and gas industry. The U.S. Geological Survey estimates that about 28 million metric tons of sand, valued at about $1.3 billion, was produced domestically in 2012 for use as proppant and related applications.

Not just any sand or sandstone deposit is suitable for use as proppant. Frack sand must meet stringent specifications: it should be nearly all quartz; grains must be round, equidimensional (spherical), and the right size; and the sand must be able to withstand very high pressures without breaking. One reason frack sand must be nearly pure quartz is because mineral impurities, such as feldspar, are commonly weaker and more prone to breaking. Spherical and round sand grains provide good porosity and permeability, which allows the oil and gas to migrate through them; angular grains tend to pack together, which reduces permeability.

The size of frack sand grains is also important, and frack sand is generally marketed and sold by size. Larger sand grains provide better permeability, but smaller sand grains are typically stronger. Therefore, the size of the proppant is generally chosen to meet conditions in a specific well. The industry term for strength of a proppant is “crush resistance.” Sand needs to have a high crush resistance because if grains break and produce smaller fragments, those fragments can plug pore space and reduce permeability. The American Petroleum Institute and the International Standards Organization provide standardized test procedures for evaluating frack sand.

The vast majority of domestically produced frack sand comes from the Midwest (Illinois, Wisconsin, and Minnesota) and the South (Texas and Oklahoma) because those areas have large deposits of sand and sandstone that meet the recommended specifications. Frack sand miners in those areas ship their product to oilfields around the country, which can result in high shipping costs (often 50% or more of the total proppant cost) for oil field operators located long distances from the sources. A local source of frack sand for western oil and gas fields would obviously reduce costs and be more efficient than shipping frack sand across the country.

For these reasons the Utah Geological Survey (UGS), with funding from the Utah School and Institutional Trust Lands Administration, produced a preliminary study of potential frac sand sources in Utah. We took numerous samples from sand and sandstone deposits throughout the state to test their suitability. The primary characteristics we evaluated were purity, grain size distribution, and sphericity and roundness. To evaluate the purity we ran semi-quantitative chemical analyses on each sample using the UGS’s x-ray fluorescence device. We sieved each sample using sieve sizes that correspond to marketed frack sand sizes, and sphericity and roundness were visually estimated using a Krumbein-Sloss chart. We also qualitatively took note of friability of sandstone samples—a “friable” sandstone will easily crumble, which is a good thing if you want to produce sand.

Overall, our results indicate some potential for frack sand deposits in Utah. A number of samples have high quartz content, but some washing may be required to upgrade the sand to meet specifications. All the samples met sphericity recommendations and many met roundness recommendations. Sieve results indicated that the most widely utilized frack sand size distribution could not be produced, but some of the other common, smaller sizes probably could. Based on results from the tests, we assigned an overall suitability ranking for each sample.

These rankings suggest that the three geologic units with the highest potential for frack sand are the Permian White Rim/Cedar Mesa Sandstones, Jurassic White Throne Member of the Temple Cap Formation, and Quaternary eolian dune sands in southwest Utah. Although the White Rim/Cedar Mesa Sandstones of Emery County had the best size characteristics, most of the samples had marginal roundness, and much of the unit is located in the San Rafael Swell, a popular recreational area that could complicate permitting. Both the White Throne Member and eolian dune sands, which were sampled in Kane and Washington Counties, showed potentially suitable size distributions, but the Quaternary dune sands may have the highest potential because they are unconsolidated, which would require less processing.

Although our preliminary results suggest geologic units with frack sand potential may be present, additional work is required to determine ultimate suitability of any of the deposits. Due to cost constraints, our study did not include crush resistance testing—a key aspect of frack sand suitability. More detailed study of sandstones with potential, the White Throne Member and White Rim/Cedar Mesa, would be necessary to determine if they are sufficiently friable—friability of fresh exposures may differ from the weathered exposures that we sampled. Also, for all potential units, adequate mine sites with sufficient resources to maintain production would need to be delineated.

As domestic frack sand production increases, a variety of possible environmental and health concerns have arisen in many communities near major frack sand producing areas. Some of the concerns are not necessarily frack-sand specific, such as increased truck traffic due to mining, but others are, such as potential exposure to respirable crystalline silica, which has an exposure level regulated by the U.S. Occupational Safety and Health Administration. While operators have worked to mitigate these concerns, they have been prominent in the Midwest.

If additional work shows that some of Utah’s sand and sandstone is acceptable for frack sand, and an appropriate site is located, Utah could become one of the few frack sand producers in the west. However, if the sand is unsuitable, Utah has another potential source for proppant: aluminum-rich mineral deposits that can be used to produce high-quality synthetic proppant. Aluminumrich minerals such as kaolinite, alunite, and halloysite are found in a number of areas, primarily in the western half of the state.