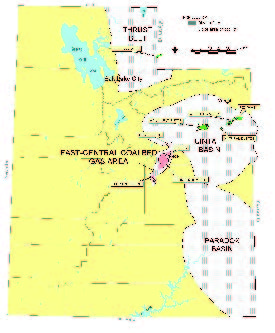 Utah’s petroleum industry logged one of its busiest years in 2001. The Utah Division of Oil, Gas and Mining approved an all-time high of 880 Applications to Drill (APDs), a 31 percent increase over 2000’s 673 permits. Most of these APDs were for wells in the Uinta Basin (709) and the east-central coalbed gas area (134). Two areas receiving less attention were the Paradox Basin (17 APDs) and the Thrust Belt area (17 APDs). Overall, APDs were approved for drilling in 14 of Utah’s 29 counties. For the period 1980 through 2001, the number of approved APDs ranged from a high of 880 in 2001 to a low of 97 in 1989. The average number of APDs approved over the past five years is 615.

Looking at the number of sites where drilling actually began (spudded) shows that 2001 was the busiest year on record with a total of 617 wells. Drilling at those sites resulted in 580 wells completed or abandoned, a 30 percent increase over the 440 wells drilled in 2000. The number of wells completed in 2001 included 399 new wells within existing fields, 163 wells extending the boundaries of fields, and 18 wildcat wells. A closer look at the 580 wells completed shows that 444 were completed as gas wells, 111 were completed as oil wells, and 25 sites were plugged and abandoned. Two reasons for the high ratio of gas to oil wells were 1) the rapid rise in the spot gas prices, and 2) the recent rapid development of coalbed-gas resources in east-central Utah. However, in every year since 1997, completions of gas wells have exceeded oil wells.

The province with the second highest level of drilling activity was the coalbed-gas area that includes the Castlegate, Helper, Drunkards Wash, and Buzzard Bench fields. Exploration for coalbed gas in 2001 resulted in 146 new wells, bringing the total number of producing gas wells to 490. The majority of well completions were in the Drunkards Wash field (110), followed by the Helper field (15), Castlegate field (7), Buzzard Bench field (4), and 10 other wells in undesignated areas nearby.

Drilling began on seven new wells in the Thrust Belt province, and one prolific gas well was completed in the southern part of Wyoming’s Yellow Creek field, which trends southwest of Evanston, Wyoming and is partly located in Utah. This particular well was actually a re-drill of a well originally completed in 1997, and while the site’s surface facilities are located in Utah, the lower, producing interval of the well is located in Wyoming.