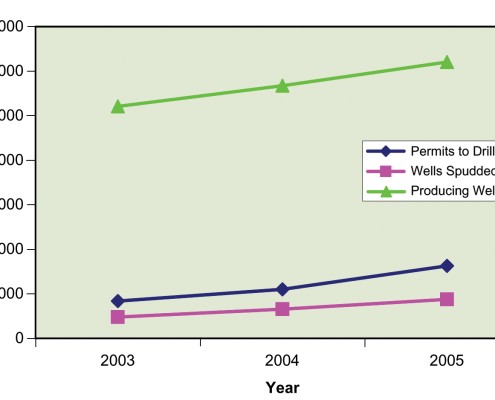 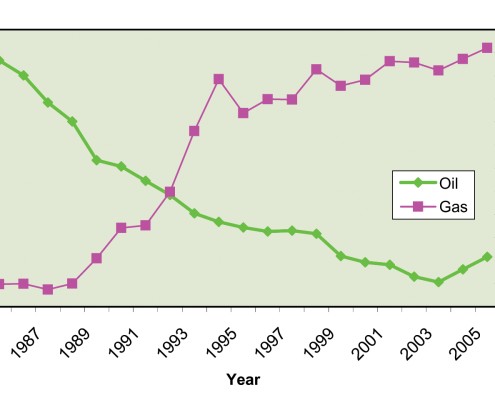 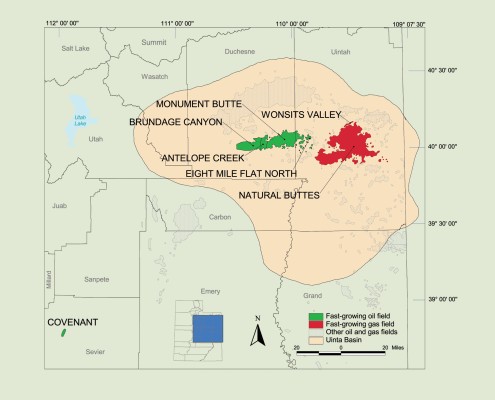 Utah is experiencing a petroleum exploration boom, fueled in part by prices that have been on the increase since 2003. Petroleum prices in 2003 averaged about $25 per barrel of oil and $4.50 per thousand cubic feet (Mcf) of natural gas, but by the end of 2005, prices had risen to $60 per barrel of oil and $11 per Mcf of gas. Levels of drilling for petroleum in Utah increased dramatically in 2004 and 2005 in response to the increasing prices, and also because oil and gas exploration companies believed that higher price levels would continue for some time into the future.

Drilling permit applications are often the first indicator of an exploration boom. Petroleum exploration companies generally try to keep an inventory of more than one year’s worth of sites to drill in order to provide flexibility in their drilling programs should initial test results turn out positive or prices increase. Accordingly, an increase in drilling-permit applications indicates that companies expect well drilling activities to increase. Records available on the Utah Division of Oil, Gas and Mining (DOGM) Web site (2006) indicate that applications for permits to drill issued for new petroleum wells jumped from 838 in 2003 to 1629 in 2005. Mirroring this growth, DOGM reports that actual well starts (called spuds) also rose from 480 new wells in 2003 to 877 in 2005. Correspondingly, the number of producing oil and gas wells in Utah increased from 5211 at the end of 2003 to over 6200 in 2005.

Now, after two years of increased exploration and development drilling, preliminary production numbers for 2005 indicate that the increased drilling efforts are starting to pay off in terms of increased oil and natural gas production in Utah. Production of oil had been in a relatively steady decline since annual production peaked at 41.1 million barrels in 1985, and reached a low of 13.1 million barrels in 2003. Meanwhile, marketed gas production peaked later at 272.5 billion cubic feet (Bcf) in 2001 and then declined slightly for the next two years before rebounding to a new high of 274.6 Bcf in 2004. Production numbers from DOGM indicate that 2005 annual oil production was 16.7 million barrels, a level not seen since 1999, and annual marketed natural gas production increased to over 300 Bcf, a level never seen before.

Most of this increased petroleum drilling and production activity is occurring on the gently inclined southern flank of the asymmetrical Uinta Basin of northeastern Utah. While much attention has been focused on central Utah’s new producing area that includes the Covenant field, where there are seven significant new oil wells, several existing fields in the Uinta Basin have seen much greater activity in terms of the total number of new wells. The six fastest-growing petroleum fields in Utah during 2004 and 2005 were Natural Buttes (+463 wells), Brundage Canyon (+111 wells), Eight Mile Flat North (+l02 wells), Monument Butte (+99 wells), Wonsits Valley (+18 wells), and Antelope Creek (+14 wells). Several other fields in the eastern Uinta Basin near Natural Buttes field, including Pariette Bench, Kennedy Wash, Gypsum Hills, and Red Wash, have each added five to eleven new wells during this same period. Other prospective areas in the state where limited drilling is taking place include continued development of the coal-bed gas fields of Carbon and Emery Counties, and expansion of several small fields in the southern Uinta Basin, where significant gas reserves have been found in Mesozoic reservoirs below the previously developed Tertiary and Upper Cretaceous reservoirs. Aggressive drilling plans announced in 2005 and early 2006 by Kerr-McGee, EnCana Oil & Gas, and EOG Resources (Natural Buttes field), Berry Petroleum (Brundage Canyon field), Newfield Rocky Mountain (Monument Butte and Eight Mile Flat North fields), and Questar Exploration and Development Company (Red Wash, White River, and Wonsits Valley fields), indicate that petroleum drilling and development activity in Utah will continue at a strong pace in 2006, and probably for several years beyond.