This issue of Survey Notes highlights the outstanding examples of the effects of past glaciations preserved in Utah’s geologic record. The last 2.5 million years on Earth are known to have been relatively cool and composed of glacial and interglacial periods. For the last 11,000 years we have been in an interglacial period, which has caused Utah’s alpine glaciers to melt and Lake Bonneville to shrink to become the saline Great Salt Lake. The articles in this issue provide a backdrop to the current discussion about global warming. Clearly, large-scale climate change has occurred in Utah (and elsewhere) over all geologic timescales, so obvious questions arising from the current discussion are: What is the evidence for change in Utah over the last century, and if there is change, what is the cause? 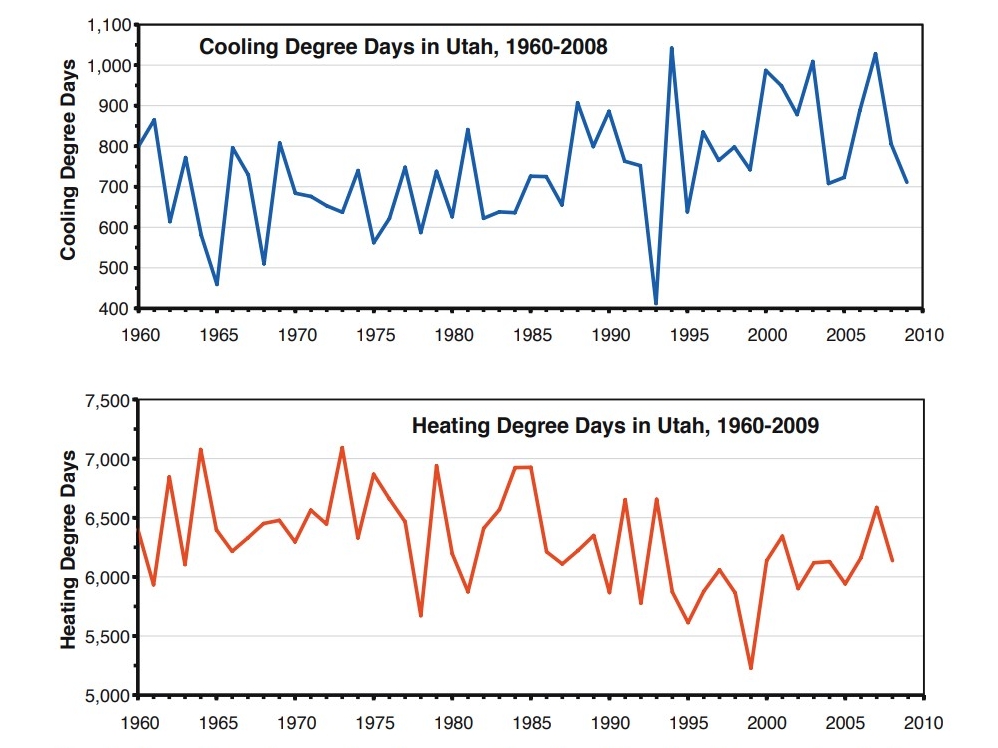 The first question is easier to answer than the second one. The National Climatic Data Center (NCDC) of the National Oceanic and Atmospheric Administration (NOAA) maintains statistics on temperature trends at weather stations, and one product that has a long history in each state is the trends in “heating and cooling degree days.” These trends are designed to provide up-to-date information on potential cooling fuel demands (from cooling degree days) and heating fuel demands (from heating degree days). Both trends are monitored by the energy utilities. A base temperature of 65°F is assumed, so temperatures above 65°F contribute to the cooling-degree compilation, and temperatures below 65°F contribute to the heating-degree compilation

The cooling-degree compilation, which is derived from the summer months, shows a pronounced warming trend since about 1970. However, the trend for heating degree days (mostly derived from the winter months) is less clear, with a possible warming trend from about 1970 to 2000, but a return to cooler winters since then. The two trends highlight the difficulties in trying to discern trends in a parameter like air temperature, which varies greatly on a daily and seasonal basis due to many factors. Fluctuations over a few years may not be representative of longer-term trends. 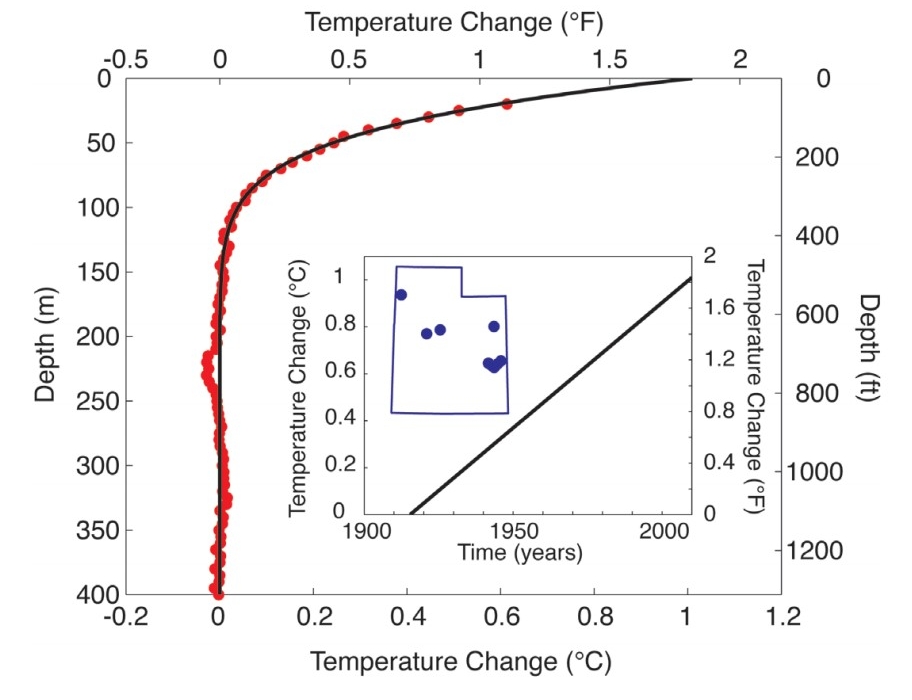 Temperature change in Utah as determined from an average of borehole temperature measurements (red dots; map inset shows borehole locations). A linear ramp temperature fit to the observed data shows a surface warming of about 1°C (1.8°F) for Utah that began around the time of the first World War (inset) (Davis and Chapman, written communication).

One set of data that naturally filters out the short-term air temperature fluctuations is the temperature observed at depth in boreholes. In northern Utah, the depth for potential freezing of the ground each winter extends to about 3 feet, and by about 30 feet depth, the temperature reflects the average annual temperature of about 50°F. Dr. David Chapman and his student Michael Davis, at the University of Utah Department of Geology and Geophysics, have been studying the longer-term air temperature changes inferred from boreholes extending to over 1000 feet depth. A recent compilation of data from boreholes around Utah shows a systematic trend of recent warming above about 300 feet depth (see figure). When this is modeled, the simplest, best-fit trend in air temperature is a steady warming of about 1.8°F since 1915. The boreholes are in fairly remote locations and should not have been subject to heat-island effects that sometimes have influenced air temperatures near major cities.

Another climate dataset with a long history for Utah is the snow pack. Has it shown any signs of shrinkage that might be attributable to warming over the last century? Randall Julander of the Natural Resources Conservation Service has studied Utah’s snow pack trends and concludes that the data since the early 1930s are equivocal. If there has been a warming trend of ı–2°F, he suggests that it may not be enough to affect the snow pack, which is dominated by precipitation trends (for accumulation) and by short-wave radiation trends (for melting).

For the second question raised at the beginning of this article about the cause of this warming, the majority of climate scientists attribute the warming to human activities such as increased greenhouse gas emissions from fossil fuel combustion. Other possible natural drivers of global warming, which caused past glacial and interglacial periods, do not fit the observed trends. Where there is no agreement, however, is on the politics of whether and how to act on global warming.