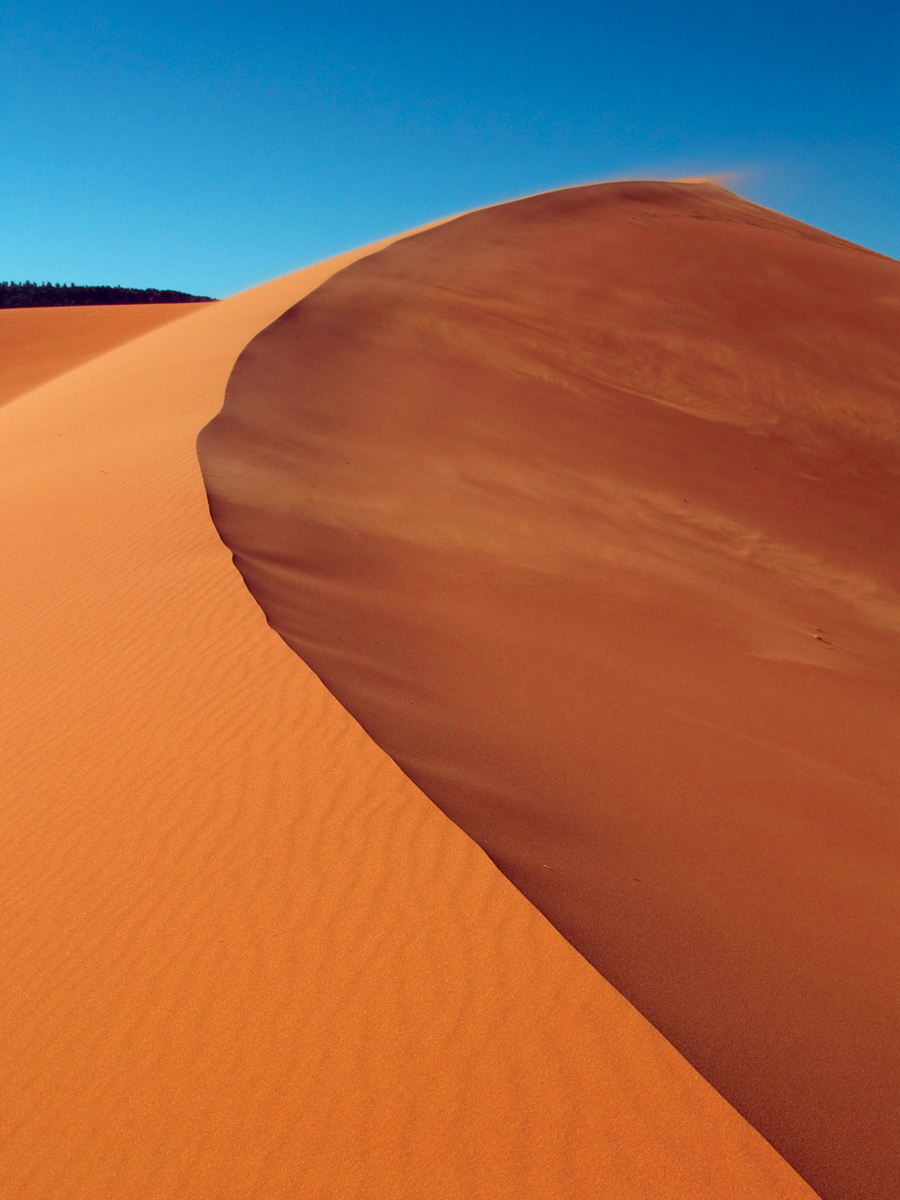 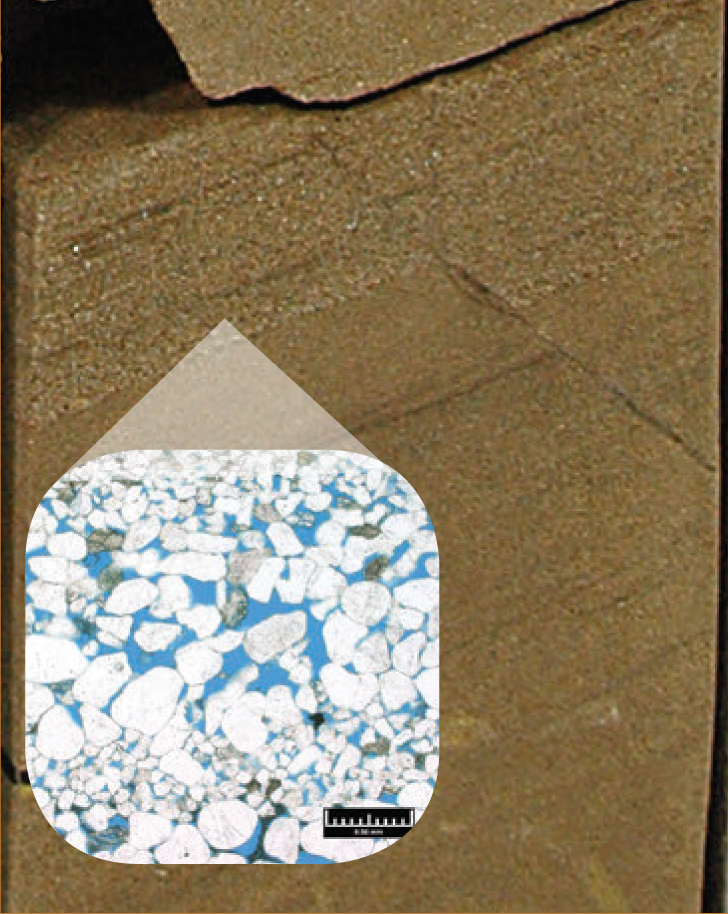 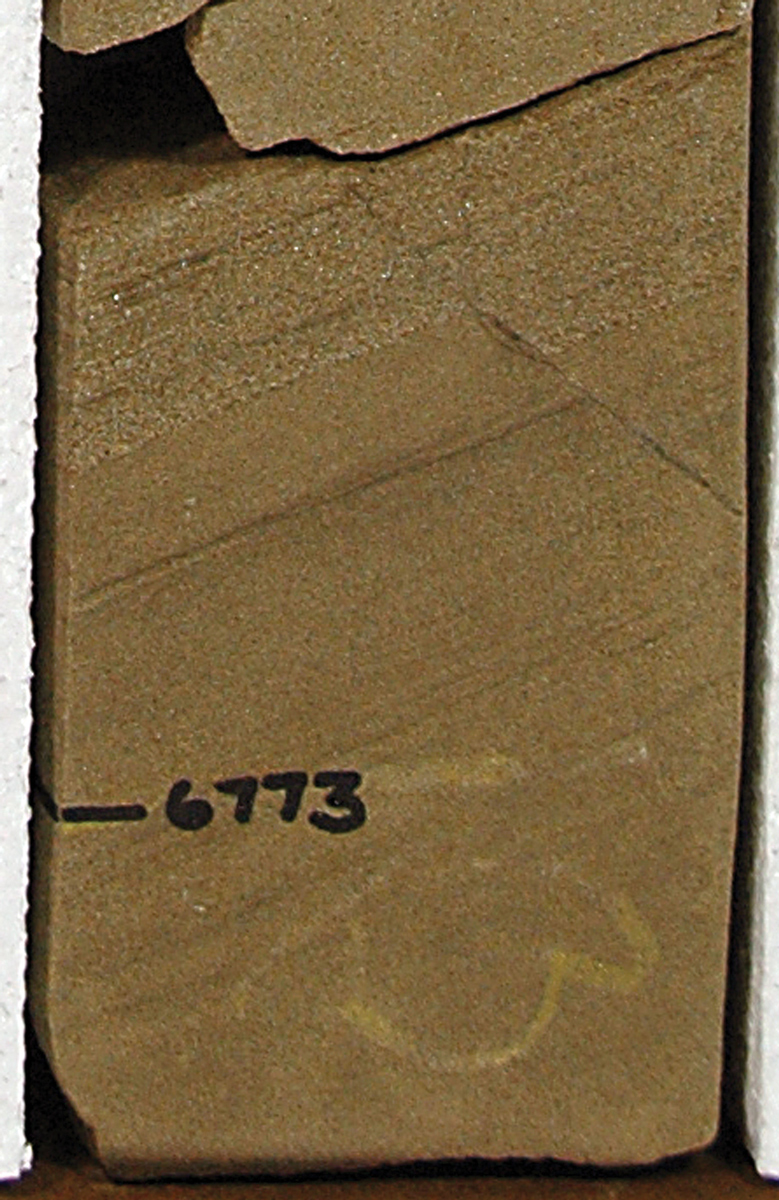 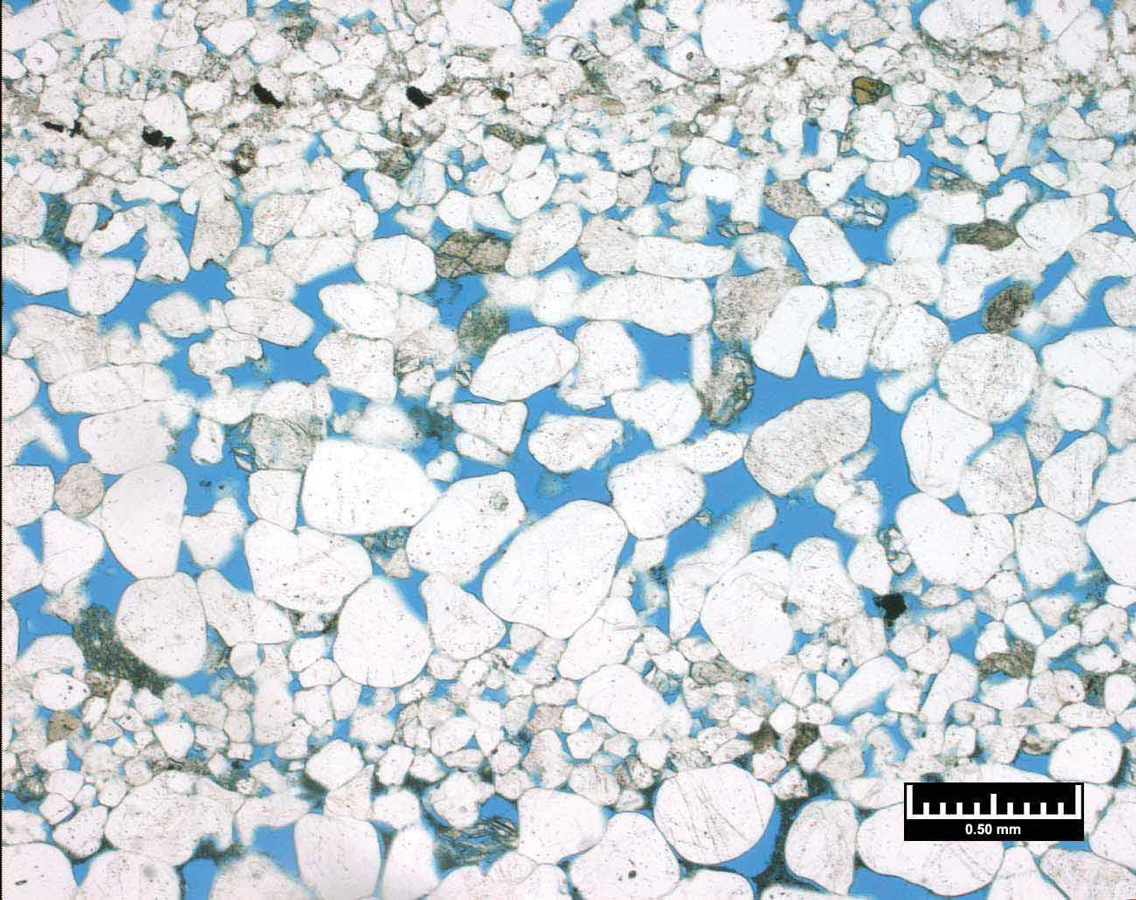 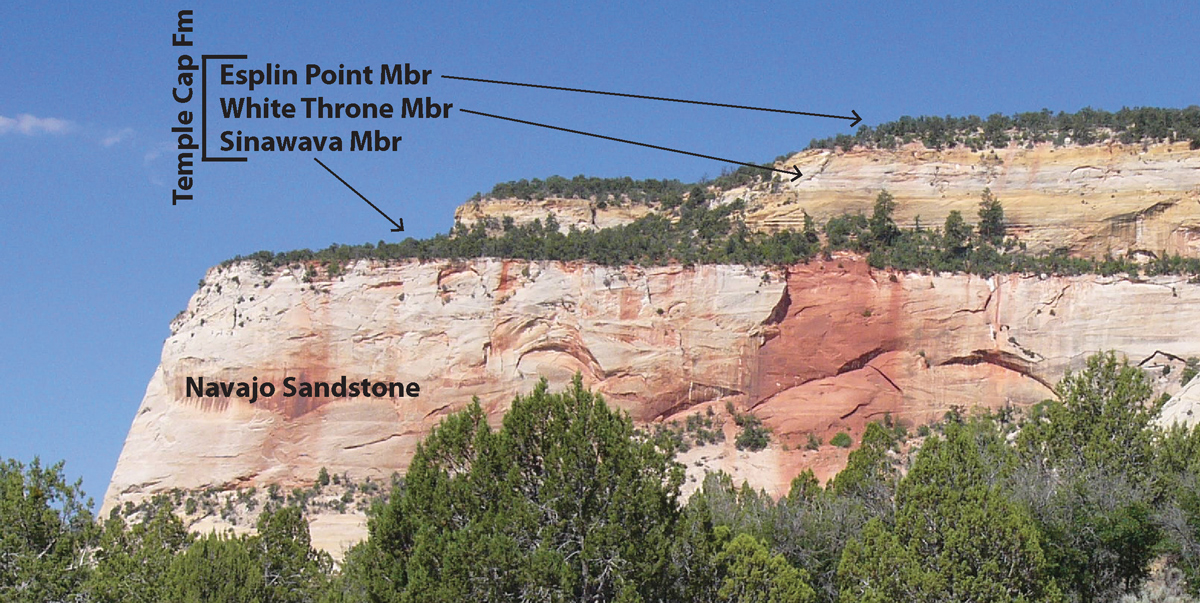 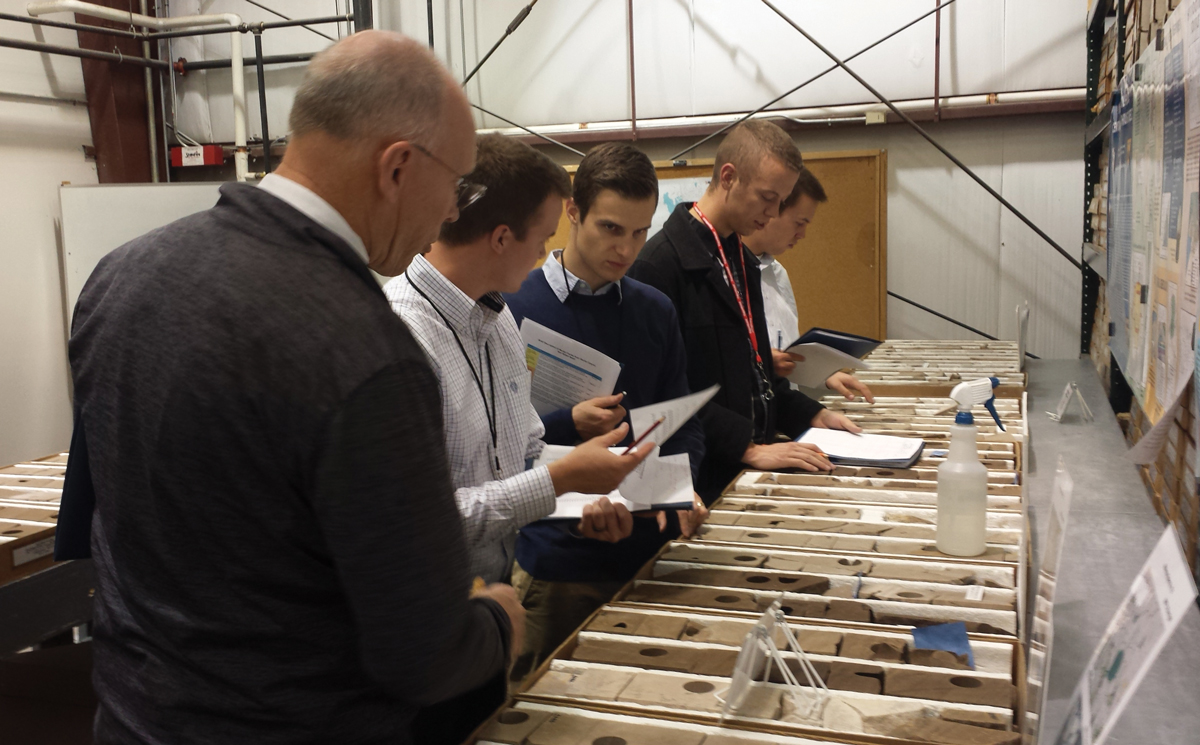 Great Sand Dunes in Utah’s Past

Around 200 million years ago, Utah was covered by a great “sea” of sand much like the modern Sahara. Huge sand dunes reached hundreds of feet in height. The winds were generally out of the north and northwest. Locally where the water table was high, small ponds or oases formed and were surrounded by vegetation that attracted various kinds of dinosaurs and other reptiles.

Following a 10-million-year period of erosion (or non-deposition), a shallow marine sea transgressed into central Utah from the southwest about 175 million years ago. The eastern shore was marked by tidal flats and coastal sand dunes similar to those found today along the coast of Namibia in southwestern Africa. These coastal dunes were not quite as large as the earlier desert dunes and the wind was dominantly out of the northeast.

To Rocks and Oil

Over millions of years and burial to thousands of feet, the sand grains of both wind-blown (eolian) deposits of ancient dunes were compacted and cemented together to create sandstone—the Early Jurassic Navajo Sandstone and White Throne Member of the Middle Jurassic Temple Cap Formation. The boundary between these two sets of rocks is called an unconformity indicating a significant time gap (like a book missing a chapter). Today these rocks are widely exposed in southern Utah and best observed in Zion National Park where they form the spectacular cliffs of the canyons.

However, where they remained deeply buried in other parts of Utah, the microscopic pore space between the sand grains became a reservoir for oil when certain conditions were met: (1) thick sandstone layers where sealed above by impermeable rocks like shale, (2) compressional forces folded the sandstone and sealed rocks to create a hydrocarbon trap, and (3) nearby organic-rich rocks were present and sufficiently “cooked” to have generated and expelled hydrocarbons into the pore spaces of the folded sandstone.

“The stuff that dreams are made of!”

A petroleum geologist’s job is to locate a spot where all those right conditions occurred and determine how deep to drill to strike it rich. To help, there are two ways to study the Navajo and Temple Cap reservoir rocks up-close and personal: (1) go to locations where they are exposed around the state, and (2) examine cores taken through them from producing oil wells. Such cores are publicly available at a Utah Geological Survey (UGS) facility—the Utah Core Research Center (UCRC), located in Salt Lake City, Utah.

In late 2004, Michigan based Wolverine Gas & Oil Corporation discovered Covenant oil field about 8 miles east of Richfield, Sevier County, in a region referred to as the central Utah thrust belt; the new field was productive in the eolian sandstone beds of both the Navajo and Temple Cap Formations. Since then the field has produced nearly 22 million barrels of oil; averaging 3900 barrels of oil per day. Cores, test data, and other material from the field were generously donated to the UCRC by Wolverine.

What Do Covenant Oil Field Cores Tell Us?

The cores from Covenant field provide an incredible wealth of information about the Navajo and Temple Cap depositional environments and oil reservoirs. Once slabbed (cut in half), the cores often reveal all the major parts of the ancient dunes encountered by the well—the windward dune flank and crest, and the leeward slipface (sometimes even displaying small avalanche deposits) and dune toe representing the base. The cores often show dune wind ripples and cross-bedding, and the reservoir quality (the amount of porosity and permeability [or how well-connected the pores are to each other]) varies with these features.

The cores also show interdunal environments such as playas and oases, or coastal tidal flats in the case of the Sinawava Member of the Temple Cap, represented by mudstone or limestone, which can be barriers to the flow of oil. Some intervals are highly fractured which enhances oil productivity whereas others are oil saturated giving off a distinct petroleum odor—”the smell of money!” Unconformities (depositional gaps) can be recognized in cores by the presence of scoured surfaces, gravel zones, subtle changes in mineralogy, or age-defining microfossils.

After a well is drilled, the operator sends down a sophisticated package of instruments in a long, skinny torpedo-like container. These instruments measure a variety of reservoir rock properties such as porosity, the conductivity of the fluids within the pores, and the natural radiation of the rocks. The resulting digital data is plotted as a series of depth-related curves, called a wireline or geophysical log, that can be used to determine if the well is a potential hydrocarbon producer and which intervals may produce. These logs are also used to correlate intervals and formations from one well to another within an oil field or regionally.

When cores are available, like those at the UCRC, the data on wireline logs can be matched directly to the actual rocks from the well. Thus one can determine how Navajo Sandstone dune or oasis environments observed in the core, for example, are represented on the log curves. These logs then become templates to identify Navajo and Temple Cap Formation depositional environments and other core-derived information for wells that have no cores—an extremely valuable tool.

The Covenant cores have been used by Wolverine, professors and students from local universities, and the UGS for research to better understand the field and explore for potential new oil resources in the central Utah thrust belt. Numerous papers based on this research have been published in scientific journals or presented at petroleum geology meetings.

The UGS offers workshops (and field trips) using these cores for industry training and university petroleum geology classes. Geology groups can examine the Navajo Sandstone cores at the UCRC and then visit the same rocks spectacularly exposed in places like the San Rafael Swell of east-central Utah or Zion National Park. During UGS workshops, petroleum geologists and students study the various rock types, environments of deposition, unconformities, and reservoir properties of the cored sections. Students are asked to make recommendations to the “company president and vice president” (i.e., the UGS instructors) as to whether the well could produce oil and from which intervals. These workshops help them prepare for the real world projects they may encounter as future petroleum geologists.

To see the Covenant oil field core set or schedule a workshop at the UCRC, contact Peter Nielsen, Curator (801-537-3359, peternielsen@utah.gov).