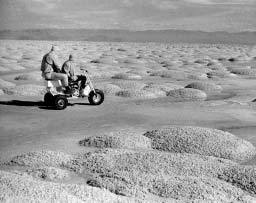 Algal stromatolites exposed near the shore of Stansbury Island during the lake-level low of 1964. 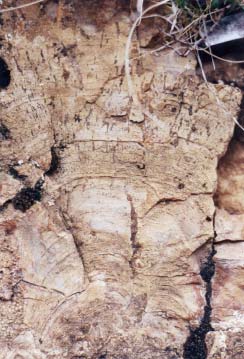 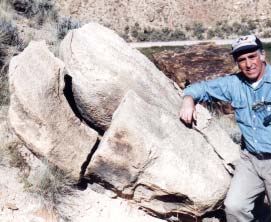 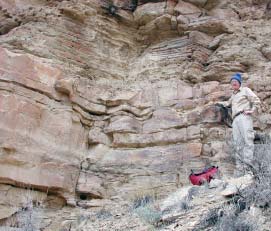 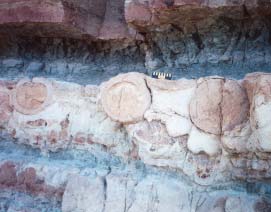 In September 2002, the Utah Geological Survey (UGS) completed a four-year study of the oil-productive Green River Formation in northeastern Utah. Objectives of the project were to increase oil and gas recovery through improved characterization of the formation. The project included examination and interpretation of both the surface (rock exposures) and subsurface (well logs and cores) data. The Green River consists of hundreds of meters of interbedded sandstone, limestone, and mudstone that were deposited in ancient Lake Uinta and along, or near, the shores of the lake, which occupied the present-day Uinta Basin 55 to 45 million years ago. Examination of fossil blue-green algae in the Green River was a very small, but interesting part of the project. Beds composed of fossil blue-green algae are commonly laterally extensive and can often be correlated from one exposure to another, providing good marker beds. The algal beds rarely are oil and gas reservoirs, but they can be used to help interpret depositional patterns and are often closely associated with the oil-productive beds within the formation.

Algae: Past and Present

Stromatolites are currently growing on the gently sloping floor of Great Salt Lake at shallow water depths where the blue-green algae receives sufficient sunlight for photosynthesis. Fossil algal stromatolites in the Green River Formation grew in a similar setting, on a gently sloping, shallow fresh-water lake bottom. Stromatolites can form a low-relief but extensive biostrom in a lake. For example, a bed in the Green River Formation known as the C marker, in Nine Mile and Desolation Canyons northeast of the town of Price, contains well-developed stromatolites at most locations where it is exposed. The C marker biostrom may have covered more than 300 square kilometers (180 mi2) along the southern shoreline of ancient Lake Uinta.