By Christopher B. DuRoss 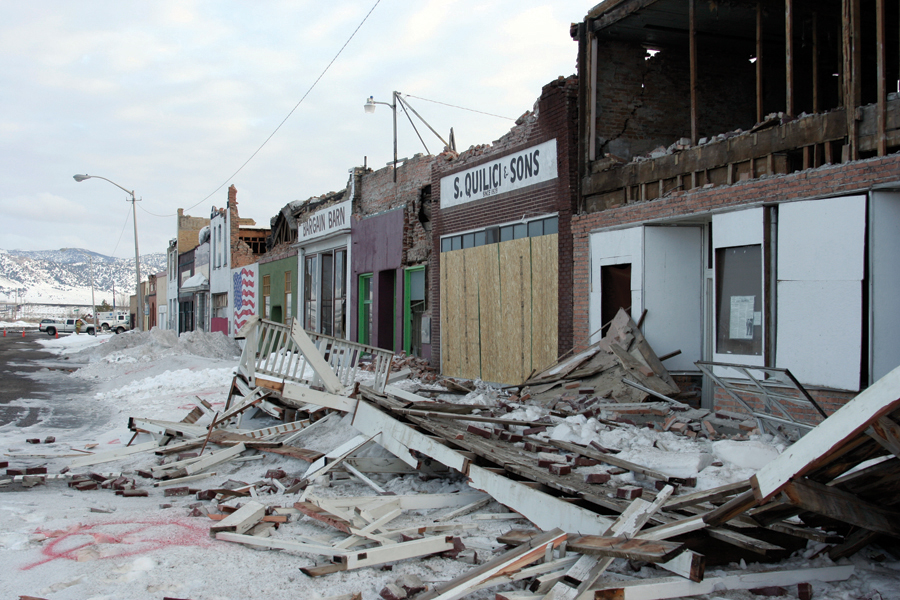 Unreinforced masonry buildings in the historic district of Wells were severely damaged in the earthquake.

The magnitude 6.0 Wells earthquake occurred in the early morning of February 21, 2008. The earthquake epicenter is about 6 miles northeast of Wells, Nevada, near the Utah border about 50 miles northwest of Wendover. Wells is located in the Basin and Range Province, a seismically active region that includes most of Nevada and western Utah. Wells and neighboring rural areas experienced strong ground shaking from the earthquake, which was felt as far as several hundred miles away from the epicenter, including along the Wasatch Front. Earthquake-related losses in Wells consist mostly of heavily damaged buildings in the historic part of downtown, and ruptured underground utilities including water pipes and fuel lines.

The Wells earthquake has several important implications for the earthquake hazard in Utah. First, the earthquake likely occurred on a fault that, based on geological evidence, does not have a high level of activity (i.e., long periods of time pass between large earthquakes). This demonstrates that less active faults in the Basin and Range Province are still significant sources of large earthquakes. Dozens of similar faults are mapped throughout Utah. Second, ground shaking from the earthquake caused considerable damage to unreinforced masonry buildings, whereas buildings designed to modern building codes showed minimal damage. Utah has a large number of similar unreinforced masonry buildings along the Wasatch Front (see The Director’s Perspective in this issue of Survey Notes), and is likely to experience ground shaking stronger than that of the Wells earthquake. Finally, the Wells earthquake provided an opportunity to consider Utah’s readiness to respond to a large earthquake. The Utah Geological Survey (UGS), Utah Division of Homeland Security, and University of Utah Seismograph Stations all assisted Nevada agencies with a quick response to the earthquake, but an event of similar or larger magnitude along the Wasatch Front would tax our resources and have more catastrophic and disruptive effects.

The UGS Geologic Hazards Program sent a team of geologists to assist the Nevada Bureau of Mines and Geology (NBMG) with the scientific response to the earthquake. The purpose of the UGS field investigation was to (1) look for surface faulting or ground cracking associated with mapped Quaternary faults (i.e., faults that have produced large earthquakes in relatively recent geologic time); (2) document geologic evidence of strong ground shaking such as liquefaction (loss of strength in water-saturated soils), ground cracks, rock falls, and landslides; and (3) provide geologic information to emergency response teams as necessary. In general, Basin and Range earthquakes smaller than magnitude 6.5 are not associated with surface faulting, but earthquakes close to this magnitude, such as the Wells event, may produce minor cracking at the ground surface. Finding these features (if present) is important for relating mapped Quaternary faults to large earthquakes in the Basin and Range Province and estimating future ground motions in the region.

The UGS field investigation focused on several mapped Quaternary faults near Wells and Independence Valley, but did not reveal any evidence for surface faulting or ground cracking. In Wells, UGS geologists searched for, but did not observe, any geologic effects of strong ground shaking, such as liquefaction or landslides. However, field observations were limited by impassible roads and frequent snowfall, which may have masked minor earthquake-related features. The NBMG plans to resume the search for these features in spring 2008.

The Wells earthquake is a reminder that Utah lies in a geologically hazardous area and that prudent planning and preparedness are essential to reduce the risk to life and property.