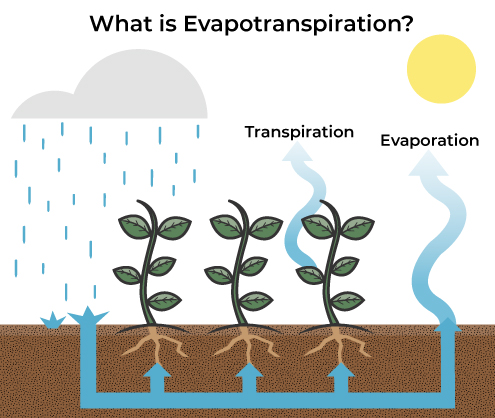 The Utah Geological Survey, with support from the Utah Division of Water Rights, is establishing a network of weather stations throughout the state of Utah to measure evapotranspiration, the combination of water that is evaporated from the land’s surface and transpired by plants. A large portion of the evapotranspiration in vegetated areas including crops is due to consumptive use, which is the water transpired and taken up by plants.

A variety of different measurement methods are used to calculate and estimate evapotranspiration, with a focus on the eddy covariance approach, which uses very rapid wind and water vapor measurements. Wind carries water vapor and other gasses in turbulent, whirling, circuitous paths known as “eddies.” The eddies move and change quickly, and therefore have to be measured rapidly. Wind removes the evapotranspired water away from the source, allowing additional water to be evapotranspired in its place.

The weather station sites serve as ground-truthing reference points for efforts that estimate evapotranspiration using satellites or unmanned aerial vehicles. Satellite evapotranspiration estimates include products from OpenET, SSEBop, and METRIC. Some of our qualifying sites are part of the Ameriflux network, which is part of the international FLUXNET network. Data from these networks are used for models on global climate conditions including the carbon and water cycles.

Consumptive Use of Irrigated Crops in Utah, 1994