East Capitol Blvd.-City Creek Landslide May Continue To Move Until The End Of May 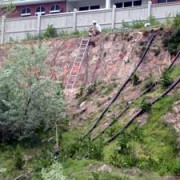 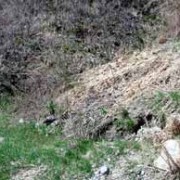 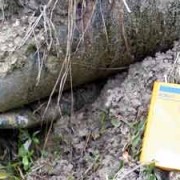 Measurements taken April 9, 2004 confirmed that the East Capitol Blvd.-City Creek (CBCC) landslide, which began its most recent period of movement in 1998, has started to move again, after stopping briefly in the early 2000s.

Based on observations and survey data, the entire landslide began moving, with the exception of the northernmost edge, in early March 2004.

Evidence includes numerous ground cracks and shears on the slide and offset of the main scarp, just east of East Capitol Blvd. About 7 inches of movement has occurred at the toe this year and the rate of movement has increased about 40 percent between late March and early April.

Although March was dry compared to the same time period in 1998, the movement pattern in previous years indicates the CBCC landslide may continue to move, possibly a foot or more, until the end of May. However, above normal precipitation could cause even more movement.

Continued movement of the landslide may block drainages flanking the slide, which could result in minor flooding.

Further movement could also affect the stability of the main scarp and lead to the enlargement of the slide and damage to the back lots and houses on East Capitol Blvd.