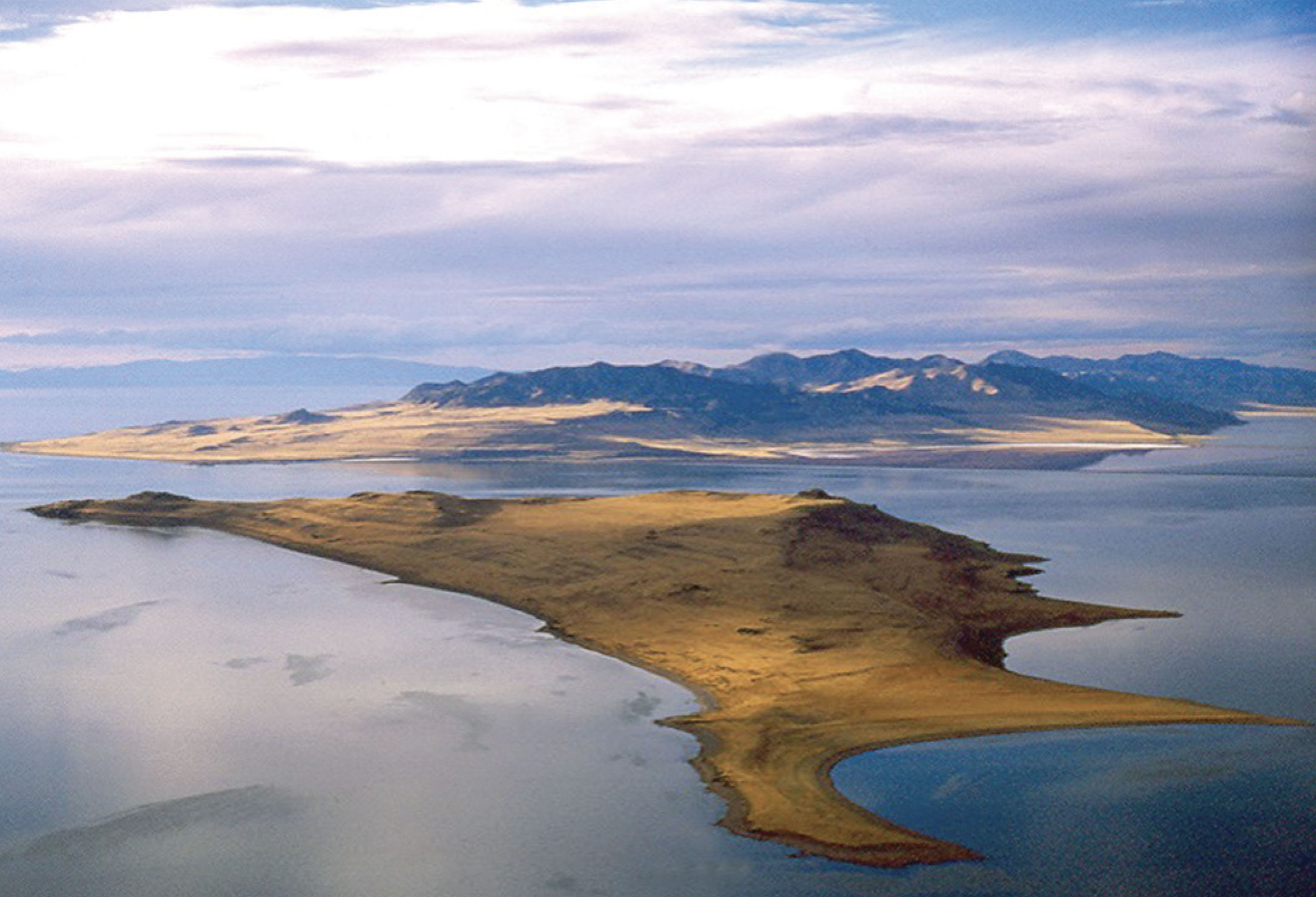 Aerial view (looking north) of Fremont Island and the nearby Promontory Mountains. This photo was taken in the 1980s, when the lake levels were higher and the island was inaccessible by way of the sandbar. Photo courtesy of Don Currey, University of Utah.

Fremont Island, with its fascinating geology, is one of eleven commonly recognized islands in Great Salt Lake, but is not always an island. When the lake surface drops below 4,195 feet above sea level, it exposes a stable sandbar that extends south from Fremont Island, connecting to the Davis County Causeway. When the lake level is higher, Fremont stands as one of its largest islands. Historically, Fremont Island has been privately owned and closed to public access. In 2020 the land was donated to the State of Utah with a conservation easement held by The Nature Conservancy that prevents development and maintains the natural environment. Now the island is managed by the Utah Department of Natural Resources, Division of Forestry, Fire & State Lands (FFSL). With careful planning and by following FFSL rules, people can travel to and explore the mysterious Fremont Island. 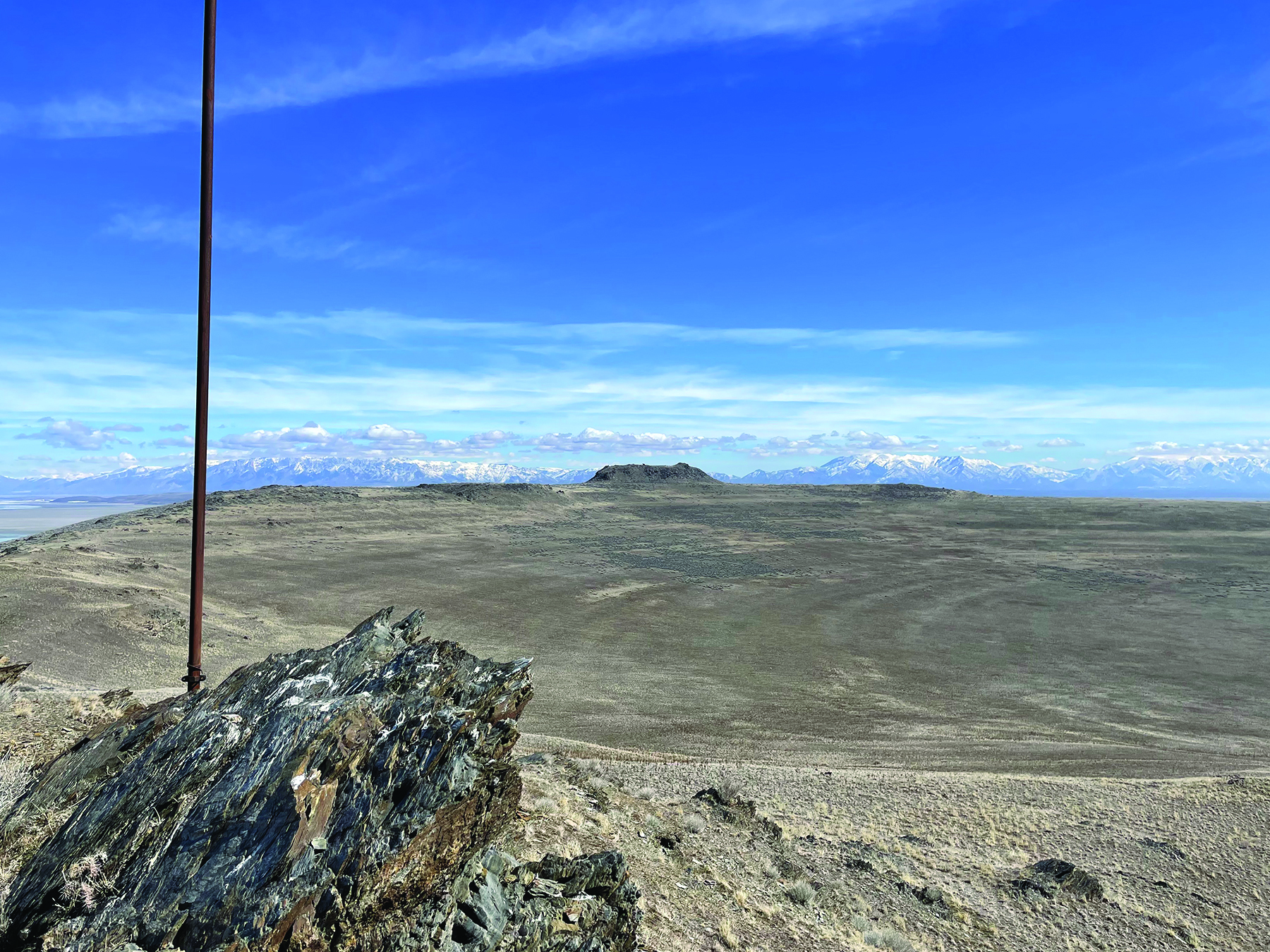 Castle Rock and the prominent ridgeline of Fremont Island, overlooking Circle Valley. Note the parallel arcuate shorelines below the ridge, which were etched by Lake Bonneville. Snowy peaks of the Wasatch Range in the background. Photo taken from Beacon Point, looking east.

The remoteness of this island in an “inland sea” and land-locked state means that few visitors have made the journey; the ones who did left notable stories. Several cultural artifacts in pristine condition indicate the presence of Indigenous Peoples on this island before 1800. Early explorers of the western United States, John C. Frémont and Kit Carson, searched for freshwater springs on the island during their exploration of the Bear River in 1843. When the search turned unsuccessful and morale was low, Fremont dubbed the land “Disappointment Island.” Kit Carson etched a cross into a rock, which can still be seen today on the island’s highest point. In 1846, Albert Carrington, namesake of Carrington Island in Great Salt Lake, and other pioneer settlers of Salt Lake City boated the lake and called this island “Castle Island” due to the castle-like resemblance of the island’s high point, now called Castle Rock. A few years later, Captain Howard Stansbury embarked on a scientific expedition to survey Great Salt Lake and surrounding areas for a suitable route for the future transcontinental railroad. It was Stansbury’s expedition in 1850 that named Fremont Island, and the name stuck.

In the 1860s, the first Salt Lake City Cemetery grave digger, Jean Baptiste, was sentenced to be banished to Fremont Island on charges of robbing over 300 graves. A few months after leaving Baptiste on the desolate island, a group sailed to Fremont Island to check on him, but he was nowhere to be found. Although the fate of Baptiste remains unknown, people say he still haunts the island and the cemetery.

Fremont Island was purchased by Judge Uriah J. Wenner in the 1880s, beginning a long succession of private ownership. Wenner and his wife are buried on the island—their gravesite on the southern tip of the island is visibly marked and surrounded by a wire fence. Another homesteader built a log cabin that remains as the only standing structure on the island. Recent owners had been planning for the 3,000-acre island to host homes and other development before The Nature Conservancy announced its securing a donor to buy the island, placing it in a conservation easement, and turning it over to the State. 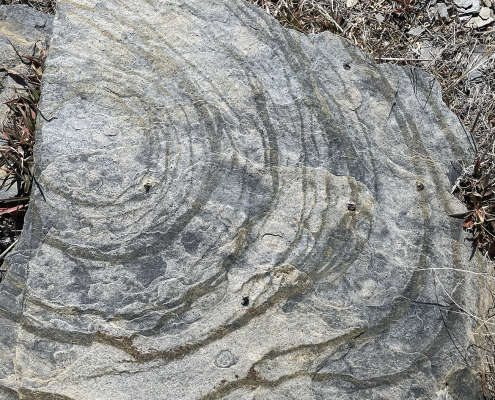 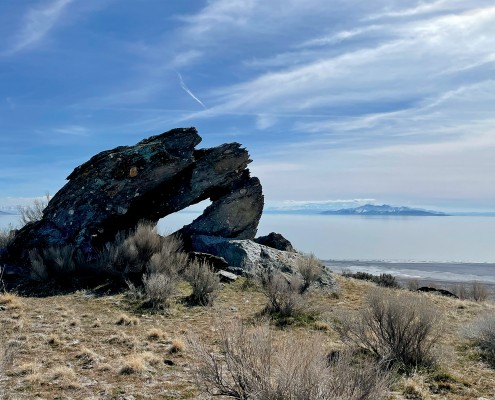 Fremont Island consists mostly of 635- to 720-million-year-old rocks (Late Precambrian) of the Perry Canyon Formation. This geologic unit contains a host of different rock types, including slate, quartzite, volcanic rocks, minor carbonate rocks, and diamictite. Diamictite is a type of sedimentary rock that contains rock fragments (clasts) of various shapes, sizes, and types embedded in a matrix of sand or mud. On Fremont Island, the diamictite rock represents glacial till deposited at a unique time in Earth history when glaciers are believed to have covered the globe. Kit Carson’s cross is etched into this “tillite,” near a natural arch.

Within the slate and quartzite, you can find pyrite cubes up to one inch in length. Most of the pyrite cubes have been weathered to other iron minerals, predominantly goethite, which do not have the shiny appearance of fool’s gold (pyrite).

From Salt Lake City, travel north on I-15 and take exit 332 for Antelope Drive in Layton. Continue west on Antelope Drive and across the Davis County Causeway. There is no parking along the causeway, so you must park your car on Antelope Island at the U.S. Army Ranger and Air Force Memorial and walk or bike east on the causeway for three miles. You will reach a sign informing you that Fremont Island is now State-owned land. This is where you leave the causeway to head north on the sandy lake bed. The trek is 6 miles on the sand toward the obvious mountain of Fremont Island, with no vegetation to provide shade along the way. Be prepared and bring plenty of water—there are no water sources on Fremont Island (remember why it was named Disappointment Island?). From mid-April to June, biting gnats emerge and may ruin your day. For conditions updates, contact Antelope Island State Park Information at 801-773-2941 or visit the current conditions webpage. 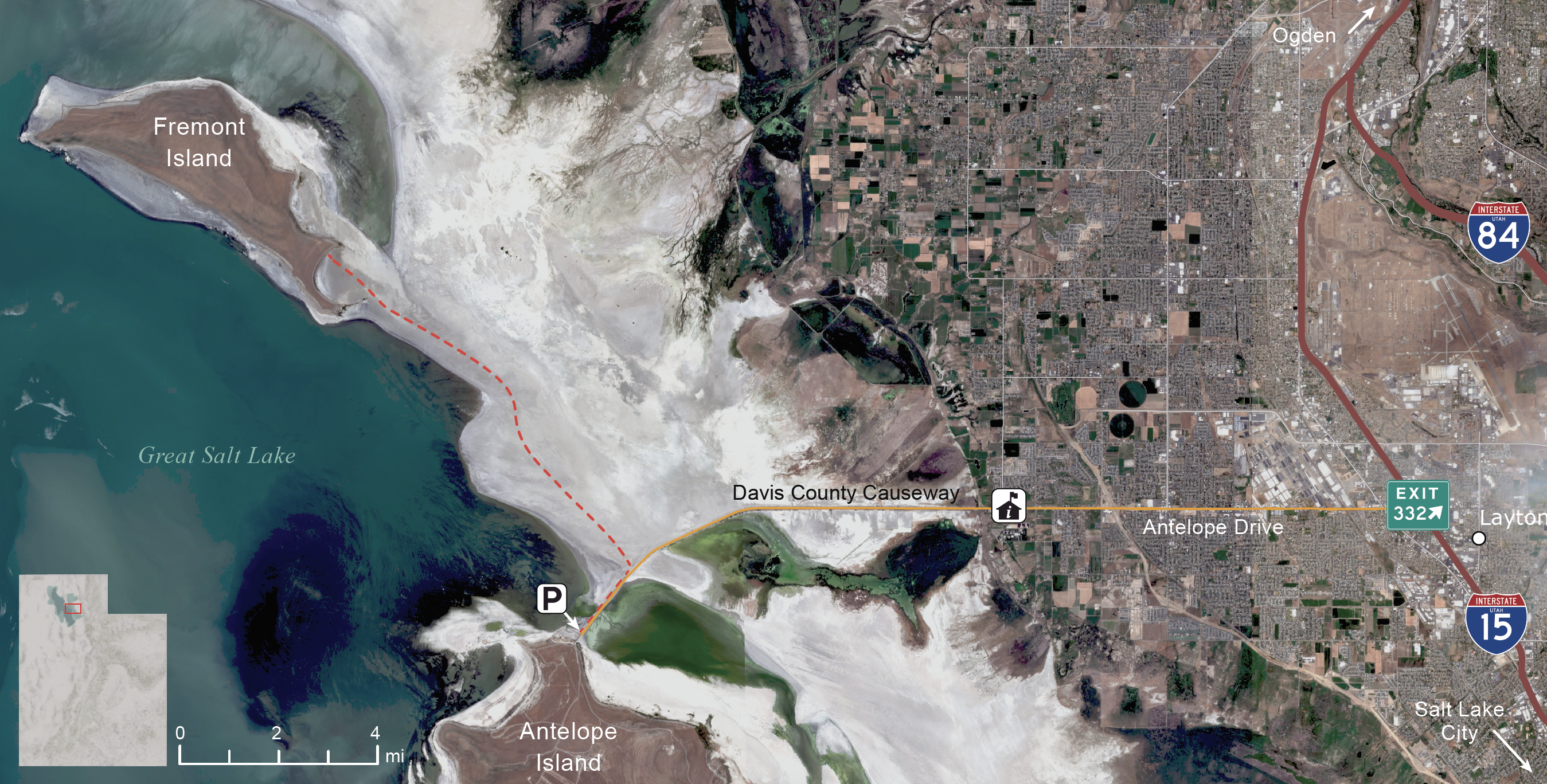 FFSL Rules: Walking, boating, and bicycling are allowed. Motorized vehicles are not allowed on the sandbar or the island itself. Overnight camping is not allowed. Visiting Fremont Island is a serious undertaking and potentially dangerous. Due to the remoteness of the location, emergency services would take considerable time to reach anyone in need of help. For more information see the FFSL website or call 801-538-5418.

The temblor, measuring 3.5 magnitude, was centered about 2.5 miles west northwest of Loa and occurred at 2:26 p.m. No damage or injuries were reported.

There is a 57% probability (over 1 in 2 chance) that a magnitude 6.0 or greater earthquake will occur in the Wasatch Front region in the next 50 years.

To address this threat, the Utah Earthquake Program consisting of the UGS, UUSS, and the UDEM, developed the map of Utah earthquakes and faults so the public could more fully understand the hazard from earthquakes and faults, as well as the resulting risk to property, infrastructure, and life safety in Utah. 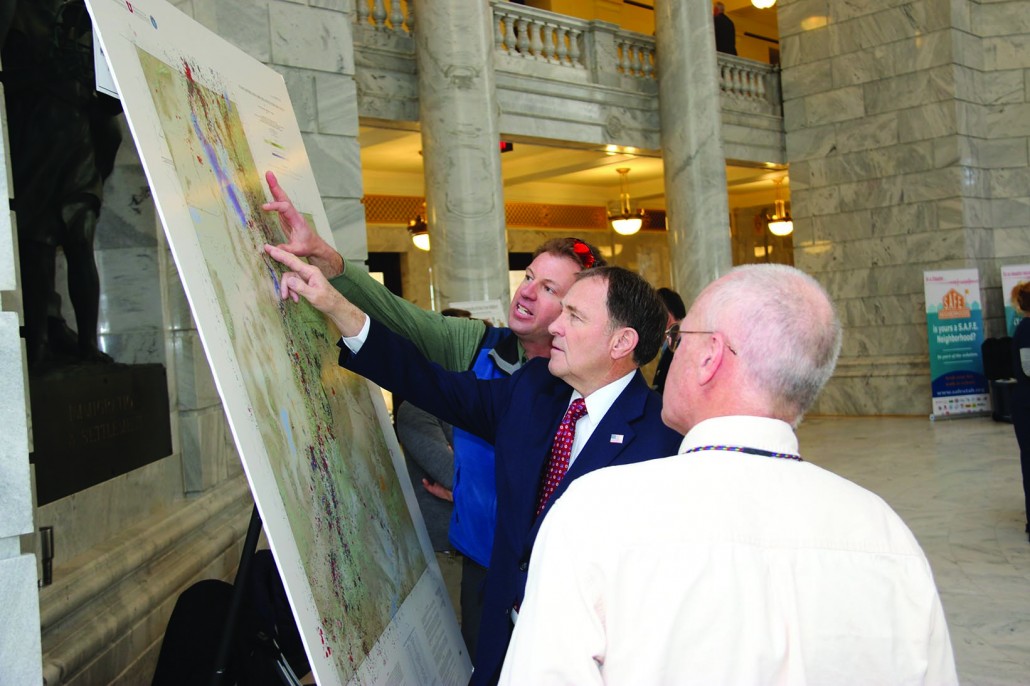 UGS geologists participated in the Preparedness on the Hill event yesterday at the State Capitol. Governor Herbert stopped by and discussed earthquake hazards in Utah, and Steve Bowman explained the newly released “Utah Earthquakes (1850–2016) and Quaternary Faults” map. Photo courtesy of the Division of Emergency Management. 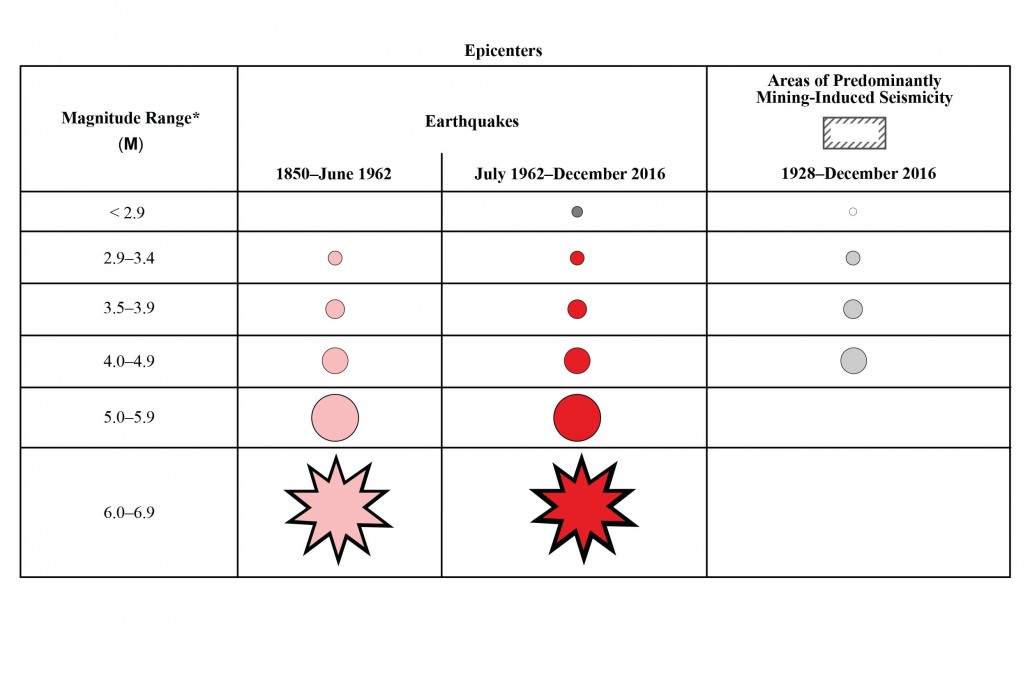 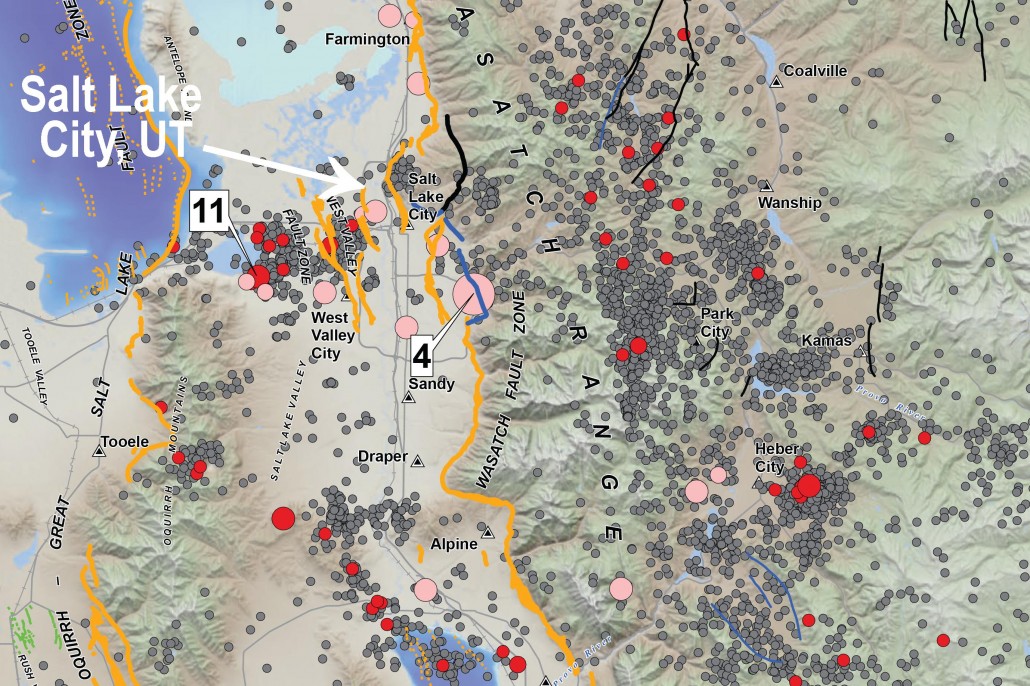 Friday marks the 318-year anniversary of one of the greatest earthquakes on record along the Pacific Coast – the estimated 9.2 “Cascadia” quake that struck just off our coast on Jan. 26, 1700. To coincide with the anniversary, NOAA and the Pacific Tsunami Warning Center have released a computer model depiction of how the devastating ensuing tsunami raced across the Pacific Ocean.

While hurricanes were devastating Texas, Florida and Puerto Rico, fires were wreaking havoc in California and other global natural disasters were delivering widespread destruction, some here in Utah expressed relief to live in a place where we do not face such devastating natural hazards.

Over the past weeks, we have witnessed a chain of disasters that would seem to be almost once-in-a-lifetime events. Mother Nature’s destructive power leaves us humbled and awed. We stand as nothing before its fury.

Is it possible to “hear” an earthquake? Not the rumbling of the ground that results, but the earthquake itself. Even if you could, what’s the point of listening?

SALT LAKE CITY — Utah will be conducting a “Great Shake Out” drill for earthquake awareness in late April.

CEDAR CITY, Utah — (AP) The University of Utah Seismograph Stations has reported a minor earthquake in the southwestern part of the state.