Did you see our 2016 Utah’s Energy Landscape is out? Read this feature on the new pub, and find the publication HERE.

Utah, identified four years ago by the U.S. Department of the Interior as one of six states in the country with prime solar potential, is riding a boom of new utility-scale developments harnessing the energy of the sun. 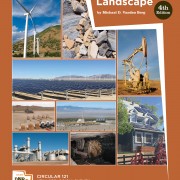 Energy is one of Utah’s four cornerstones for success, and the development of clean, secure, low-cost energy is one of the Governor’s top priorities.  Energy use and development is a topic of great interest to many Utah residents.  Energy is vital to our modern way of life, and energy education is required before citizens can engage in thoughtful dialogue.  The Utah Geological Survey’s (UGS) newly updated Utah’s Energy Landscape is a booklet designed to assist Utah residents and others on becoming more familiar with Utah’s diverse energy portfolio.

Two recent events have dominated Utah’s energy scene in the past few years: 1) the collapse of crude oil prices due to a worldwide oversupply, and 2) the exponential increase in both utility-scale and residential PV (photovoltaic) solar capacity. First, Utah’s crude oil price dropped from a high of about $100 per barrel in the summer of 2014 to a low of about $30 in late 2015, with prices dipping to $20 a barrel in early 2016.  Consequently, the number of drilling rigs in Utah decreased from about 23 in late 2014, down to 3 rigs in late 2015, and finally down to zero in early March 2016.  Since new oil wells are not being drilled to make up for production declines at existing wells, crude oil production in the state decreased nearly 10% in 2015 and is projected to continue to decline as long as prices remain low and rigs remain idled.  Similarly, natural gas prices (down 43%) and production (down 7%) have also decreased due to oversupply from the country’s prolific shale reservoirs.  Second, in 2015, 166 MW of new utility-scale solar capacity was installed in southwestern Utah and nearly 680 MW is currently under construction or in development.  By 2017, nearly 850 MW of new solar capacity will be online, more than wind, hydroelectric, geothermal, and biomass combined.  This surge in solar was also seen in the residential sector; the total number of renewable energy tax credits filed in Utah has grown exponentially in the past 6 years, from only 153 in 2009 to 3,061 in 2015, of which 94% were for residential PV.

The state of Utah is fortunate to have abundant and diverse energy resources including large reserves of conventional fossil fuels, several areas suitable for renewable resource development, and vast quantities of untapped unconventional oil shale and oil sands resources.  This publication, now in its fourth edition, provides balanced facts on each resource, including maps, graphs, helpful explanations, and photographs.  For those interested in obtaining the numbers behind the graphs, each page includes a reference to available historical data located on the UGS’s Utah Energy and Mineral Statistics website.

Printed versions of this publication are available for free at the Natural Resources Map & Bookstore located at 1594 West North Temple, Salt Lake City (801-537-3320, or 1-888-UTAHMAP; geostore@utah.gov) and also at the Governor’s Office of Energy Development (OED).  The publication will also be available at the OED booth at the Governor’s Utah Energy Development Summit on May 24-25, 2016.  The report can also be downloaded from the UGS website at http://ugspub.nr.utah.gov/publications/circular/c-121.pdf. The number of renewable energy tax credits processed by the State of Utah has increased exponentially in the past few years, from 153 tax credits processed in 2009 to 3,174 tax credits processed in 2015. The vast majority of these tax credits (94% in 2015) are for residential solar photovoltaic (PV) systems. Also of note, the average size (capacity) of residential solar PV systems has nearly doubled in the past 5 years from 3.3 kW in 2010 to 6.4 kW in 2015. It is thought that this increase is due to decreasing installation and equipment costs as well as a shift towards the desire to cover nearly 100% of a household’s electricity usage. Total solar capacity for the commercial and residential sector in Utah is estimated at about 55 M As of April 2016, 166 MW of new solar generating capacity has come online in southwestern Utah. In addition, approximately 600 MW of capacity are currently under construction and roughly 80 MW of capacity are under development and should be completed by the end of the year. By 2017, Utah’s utility-scale solar capacity will total 847 MW, more than wind, geothermal, biomass, and hydroelectric combined.

Editor’s note: This is the first in a two-part series on the rise and fall of the oil industry and its impacts on Utah.

A Gallup poll released in late February revealed Utah residents are the most positive in the nation about their state’s economic conditions.

UGS scientists are part of an exciting research team led by the Energy and Geoscience Institute at the University of Utah that will study new techniques for harnessing the Earth’s heat to generate electrical power. Our team will evaluate the establishment of an enhanced underground geothermal project about 10 miles north of Milford, Beaver County. The research is one of five proposals currently funded by the U.S. Department of Energy’s Office of Energy Efficiency and Renewable Energy. Check it out —

Link to the article HERE

It is now up on the EERE Facebook page HERE

Tar sands development often conjures images of a bleak northeast Alberta landscape, scraped and scalped of its vegetation after being converted to sprawling strip mines from which much of Canadian oil imports to the United States originate.

But if a proposal by Alberta-based Earth Energy Resources survives environmentalists’ appeal, eastern Utah’s canyon country could become a backdrop for the only tar sands mine in the United States.

In 2009, Utah mining regulators approved EER’s proposed PR Spring Mine on state institutional trust land in Uintah and Grand counties northwest of Grand Junction, Colo. If the mine is successful, it could prove the viability of a Utah tar sands industry, possibly bringing a new level of energy development to the Colorado Plateau.

Tar sand, also called oil sand, bituminous sand or asphaltic sandstone, is oil-laden sedimentary rock most commonly extracted in Canada. Utah’s tar sands, however, are generally half as rich as Canada’s and require more processing to extract the oil.

The push to develop tar sands in Utah is a fairly recent phenomenon.

Determined to find a way for American oil shale and tar sands to become sources of domestic energy production, Congress required the U.S. Department of Energy to start up a tar sands and oil shale leasing program as part of the 2005 Energy Policy Act.

In 2008, the DOE completed an environmental study of its tar sands and oil shale program, outlining 11 potential tar sands development areas in Utah, the only state in which tar sands are thought to be economically recoverable.

In a new publication from the Utah Geological Survey, Utah’s numerous energy sources are outlined and explained. Geothermal energy is an up and coming energy source gaining more national attention.

Utah is one of six states that have begun harnessing the power of vast geothermal energy reserves for benefit, according to the UGS’s Utah Energy Landscape portfolio. Raser Technologies has three geothermal energy projects in the works for southern Utah, and more companies are looking into building plants.

Though the plants are producing significant amounts of energy, Utah is not abandoning its other sources for energy.

“I don’t really think it’s a switch. It’s more of a mix,” said geologist for the state of Utah, Michael Vanden Berg.

The Utah State Energy Program (USEP) has issued a Request for Grant Applications for Energy Efficiency and Renewable Energy Outreach, Education, and Marketing Campaigns. A total of $500,000 is available for this grant.

It is anticipated that the funds will be issued through two-to-six separate grants. Applicants are encouraged to seek partnerships with utilities, local governments or other resources to help leverage marketing and education.

The purpose of the Energy Efficiency and Renewable Energy Outreach, Education, and Marketing Campaigns is to increase the adoption of energy efficient and renewable energy technologies, and to increase participation in USEP programs.

The Utah State Energy Program (USEP) has been allocated almost $9.6 million from the U.S. Department of Energy’s (DOE) Energy Efficiency and Conservation Block Grant (EECBG). Dr. Jerriann Ernstsen, manager of the EECBG program, urges local governments to start planning now to help prevent communities from missing the funding opportunity application period, which will have a very narrow window of time to apply. The project types will focus on energy efficiency retrofits, on-site renewable energy systems, traffic and street lighting, and other related projects.