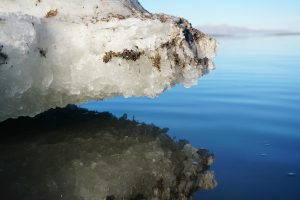 One of the mirabilite mounds hanging over the water of the Great Salt Lake.

GREAT SALT LAKE STATE PARK — Park Rangers and Geologists have discovered four rare formations on the south shore of the Great Salt Lake – just north of the park and marina. Ranger Allison Thompson first noticed the salt formations in October 2019. As time passed, she noticed formations continue to grow and eventually she reached out to members of the Utah Geological Survey for their help.

After investigating, staff discovered that the mounds were, in fact, Glauber’s salt, also known as “mirabilite.” Researchers are particularly interested in the precipitation of mirabilite mounds because they may serve as analogues to similar features and conditions on Mars.

Mirabilite mounds are rare and have never before been documented at the Great Salt Lake. They have only been found at a few locations around the world – primarily in the Arctic.

Geologists have determined that the mirabilite is precipitating from warm, high salinity sulfate-rich springs, visible only when the lake level falls below an elevation of 4194 feet. A closer inspection of the mounds revealed that they are a built-up collection of crystallized terraces, similar in appearance to the travertine rimstone and dam terraces that form at Mammoth Hot Springs in Yellowstone National Park. 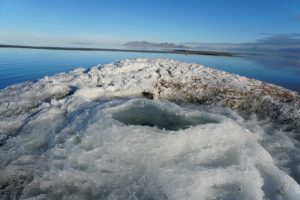 Water from the saline spring flowing through the top of a mirabilite mound.

As the mounds at the Great Salt Lake grow, they eventually seal off their spring source and a new mound will begin to form a few dozen yards away. Currently, the beach has four mounds that have grown up to 3 feet tall and several yards wide.

In addition to the requirement of saline spring waters with very specific chemical composition, mirabilite is only found in sub-freezing environments, such as those found in the polar regions of Earth.

When temperatures rise above freezing, the impressive clear mirabilite crystals that form the mounds at the Great Salt Lake will dehydrate to form a white powdery mineral call thenardite (NaSO4). As such, these mirabilite mounds will disappear with changing temperatures and the rising lake levels.

Staff at Great Salt Lake State Park will be offering guided tours of the mirabilite mounds to the public. These tours will be available this coming Saturday and Sunday (January 11-12, 2020) and will be available every half-hour each day between the 10 a.m. and 4 p.m. Those attending a guided tour are advised to wear water-resistant or waterproof boots as the lake water and mud can rise to mid-calf.

As research into these mounds continues, we are asking that members of the public do not damage these mounds or intentionally remove pieces of them. 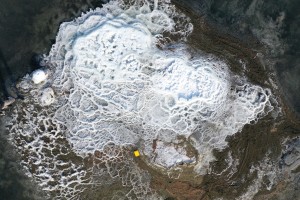 An above view of one of the mirabilite mounds with a notebook shown for scale. 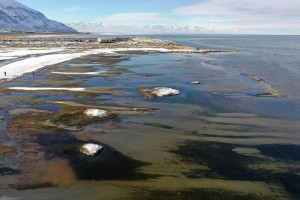 The four mirabilite mounds along the Great Salt Lake shoreline with the State Park gift shop in the background.