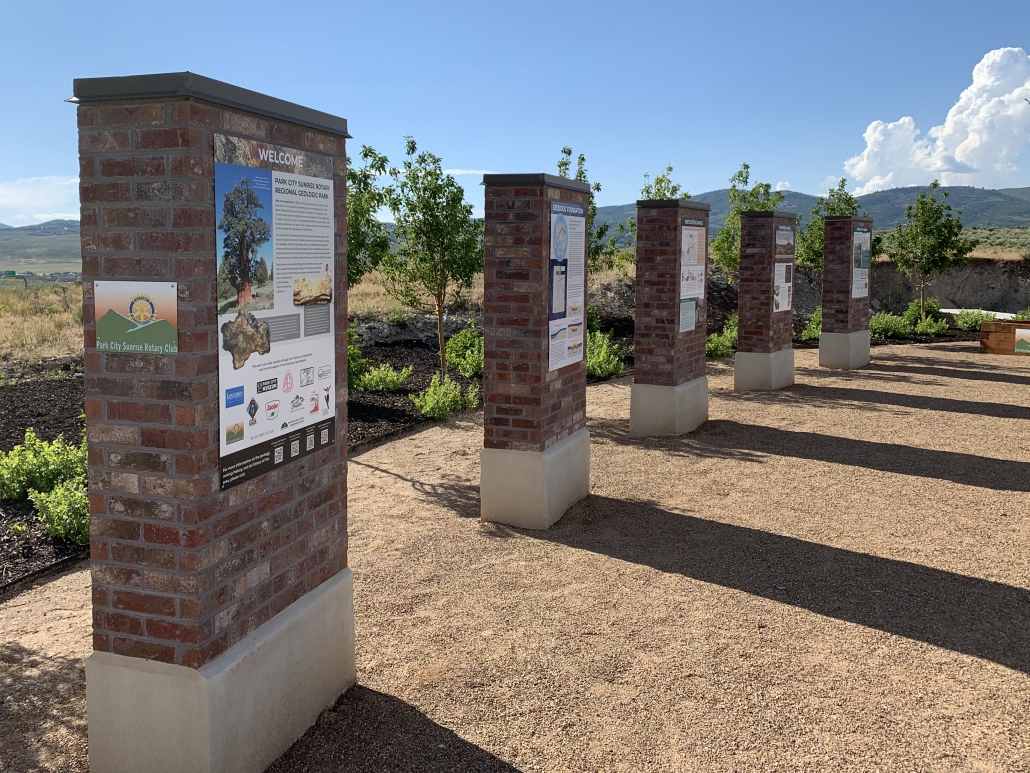 The Park City Sunrise Rotary Regional Geologic Park will be unveiled at a ribbon cutting ceremony at 12 noon on Saturday, September 21. The public is invited. The geologic park includes a welcome panel, nine pictorial panels, and large specimens of petrified wood.

Park City, UT – After 4.5 billion years of geologic evolution, 35 million years of turning wood into stone, and two decades of community vision, the Park City Sunrise Rotary Regional Geologic Park will be unveiled at a ribbon cutting ceremony at 12 noon on Saturday, September 21st. The public is invited.

The geologic park includes a welcome panel, nine pictorial panels, and large specimens of petrified wood. Educational signage provides information for everyone, from the casual visitor to geology students on field camps and traveling geologists.

How the Park Came About

This discovery prompted members of the Park City Sunrise Rotary Club to design an exhibit telling the story of the erupting volcanos and geological chaos that created a historic mining town. They approached developer Matt Lowe as he began planning a new subdivision, Silver Creek Village. He dedicated the park’s space, and the Rotarians turned to the community to make the exhibit a reality.

Highlights from the Panels

What did the region look like 35 million years ago? Volcanoes pocked the landscape and explosive eruptions of rock and ash leveled the forests that became the area’s petrified wood. Glass shards in volcanic ash weathered to form mineral-rich groundwater, providing silica that slowly turned wood to stone. The volcanic rocks, known as the Keetley Volcanics, and related igneous intrusions are responsible for the mineralization in the Park City mining district.

How to get to the Regional Geologic Park

From the Wasatch Front, head east on Interstate 80 to exit 146 for U.S. Highway 40/189 towards Heber City/Vernal. After the interchange take the first exit (exit 2) for Silver Summit. At the end of the off-ramp turn left (east) onto Silver Summit Parkway, which becomes Silver Creek Drive after crossing over the highway. In less than a quarter mile from U.S. Highway 40/189, at the traffic circle, take the third exit onto Pace Frontage Road (northbound). After half a mile turn right (east) onto Old Forest Road. The park is located a couple hundred yards past the intersection on the left.

From Park City’s historic downtown, head east on Kearns Boulevard (UT 248) to U.S. Highway 40 west/189 and go north. Take exit 2 for Silver Summit. At the end of the off-ramp turn right (east) onto Silver Creek Drive and follow the directions above.