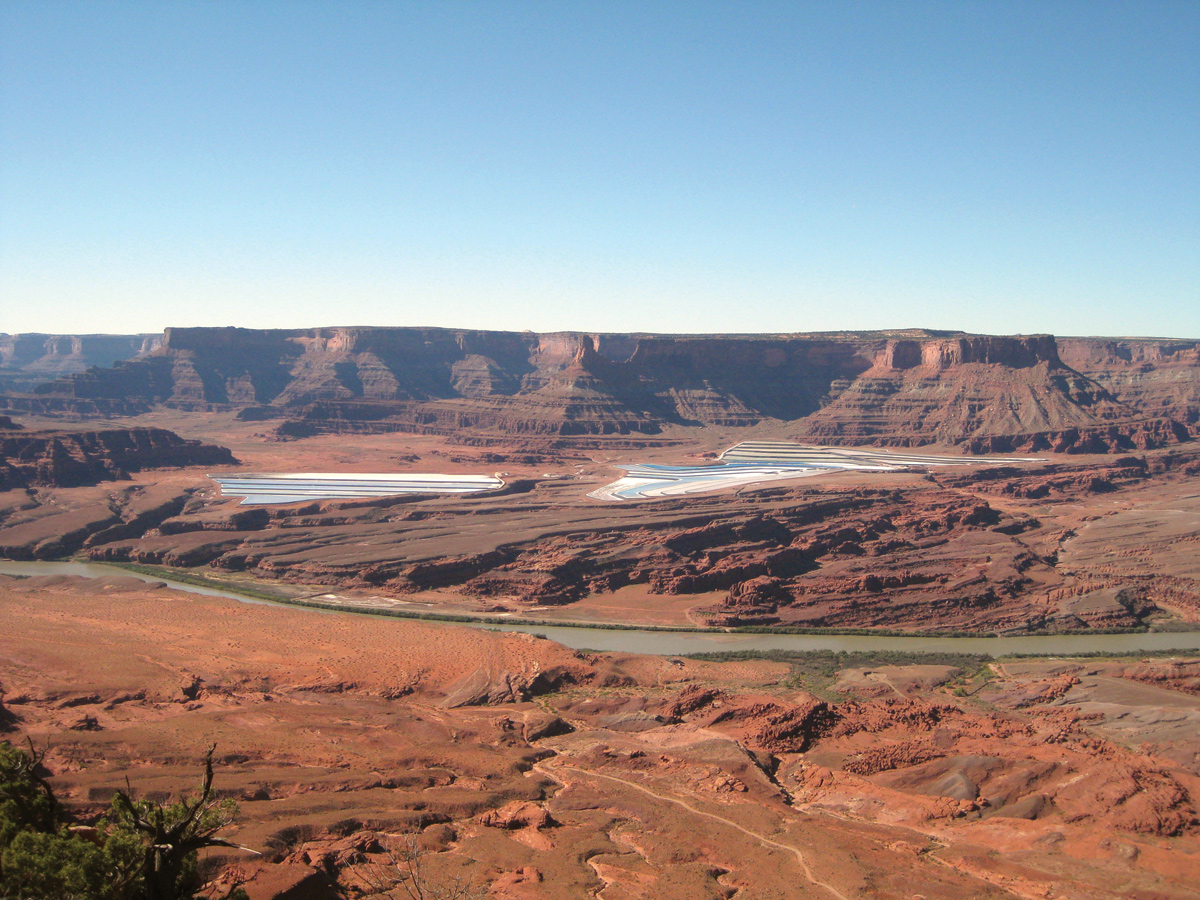 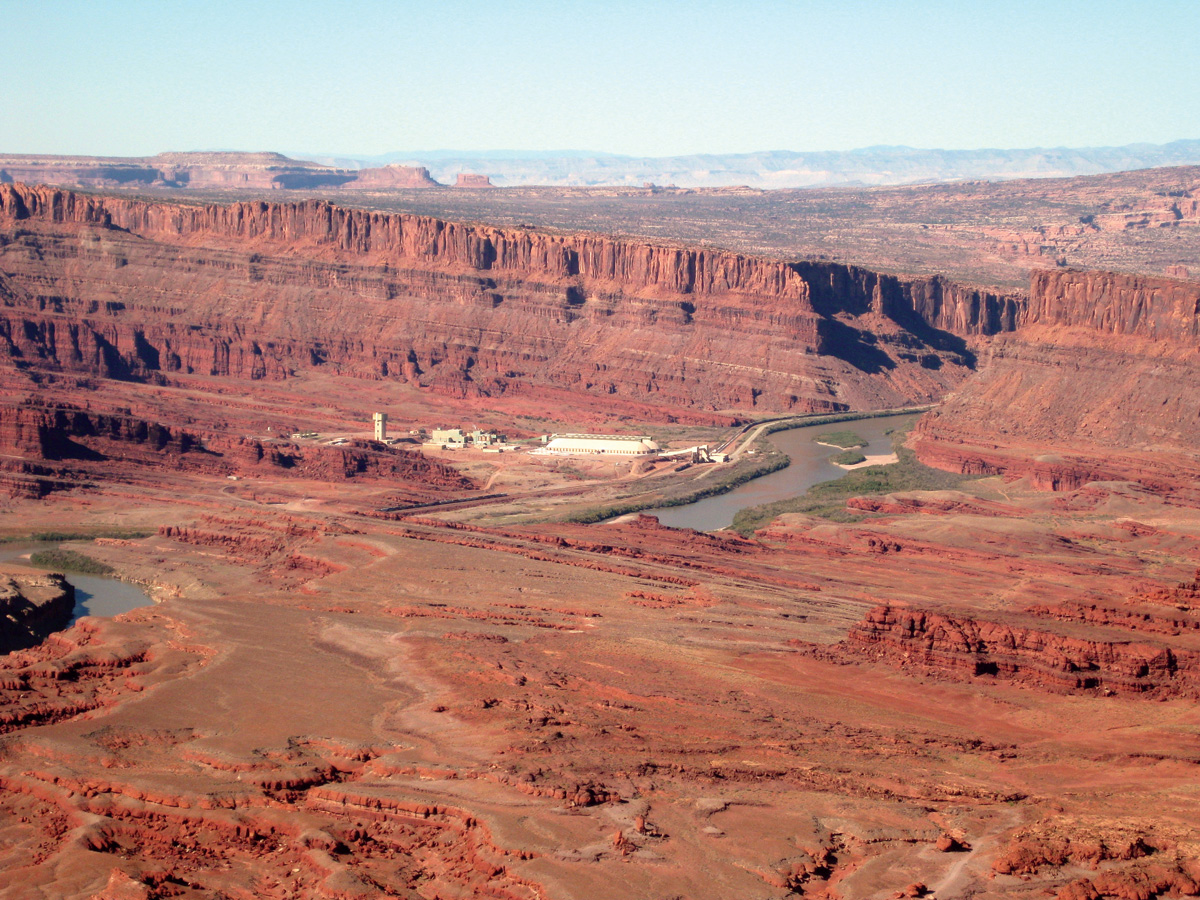 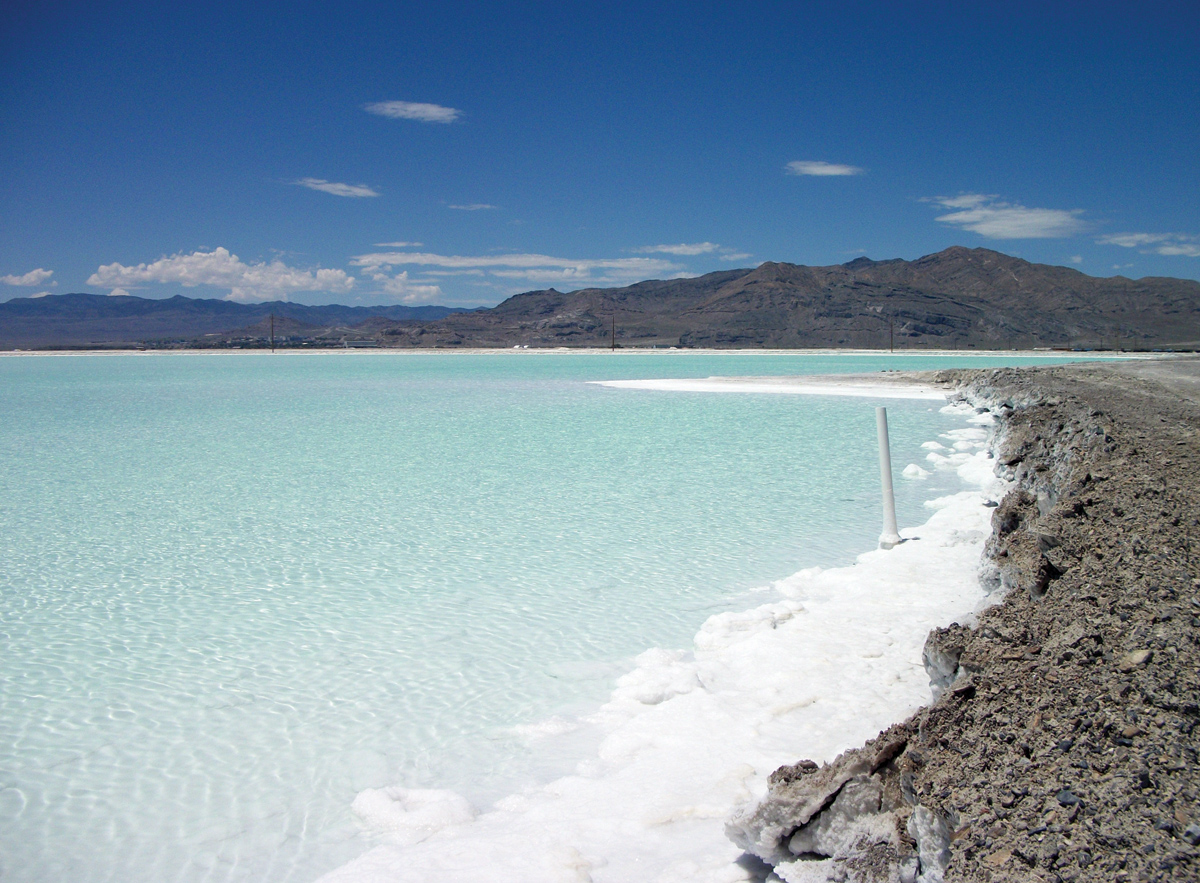 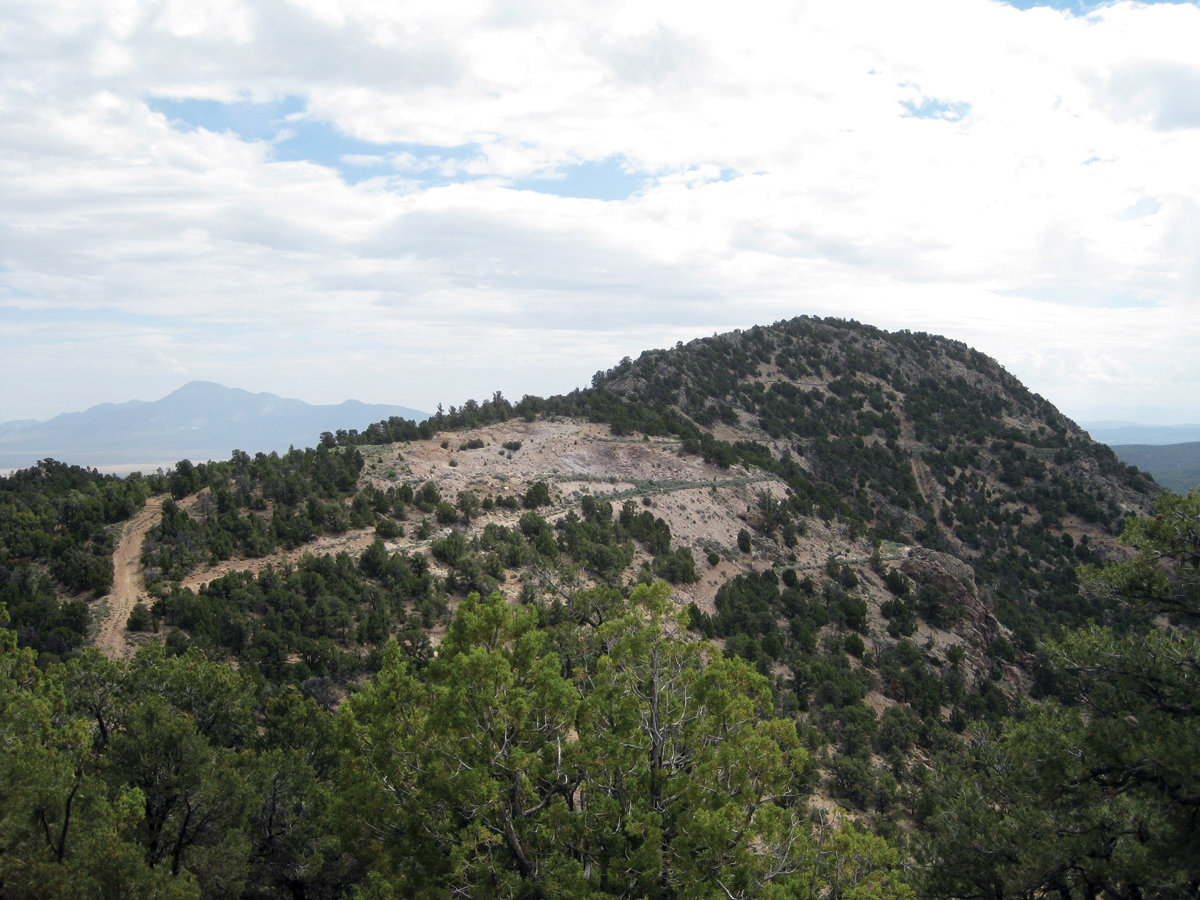 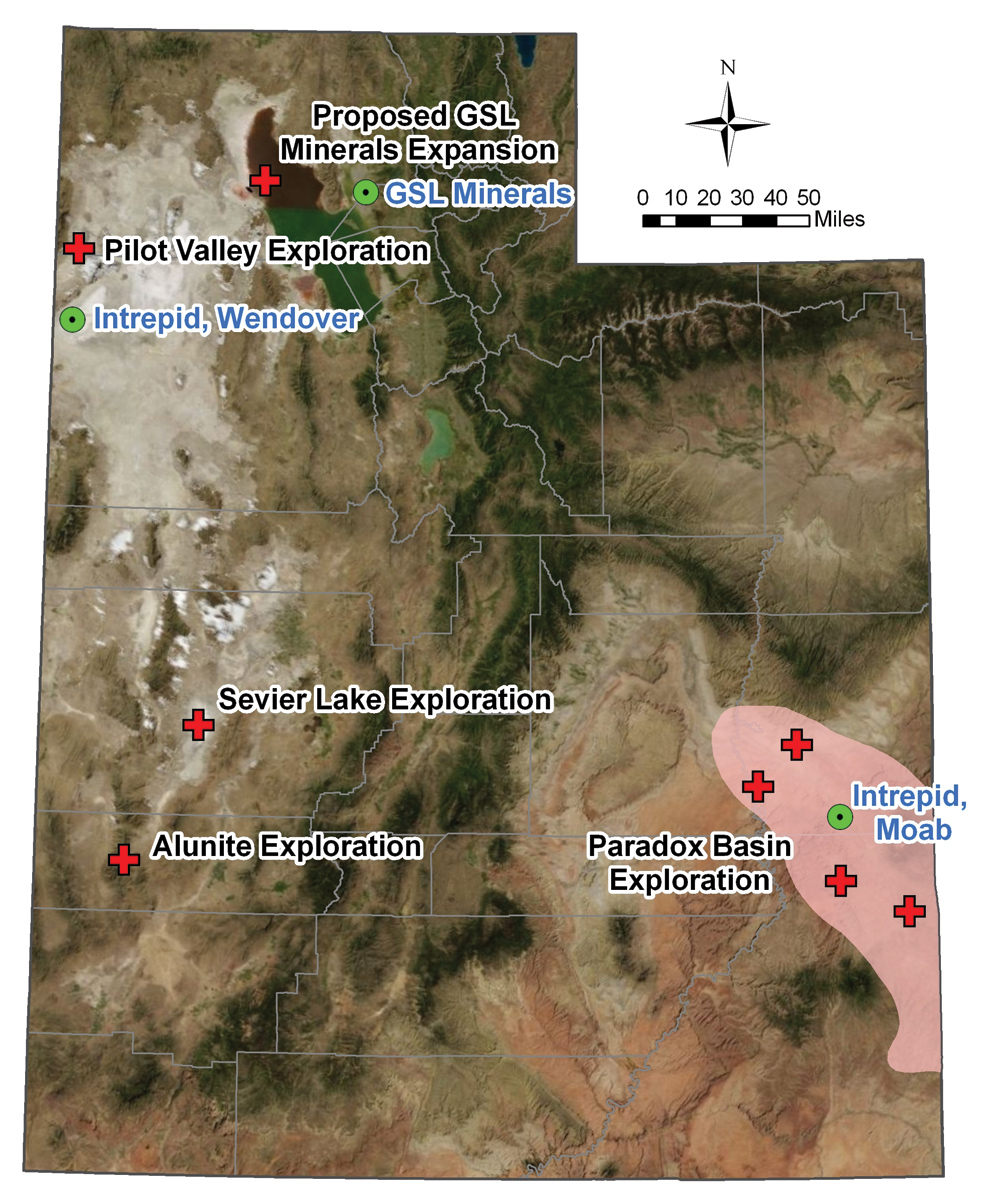 Andrew Rupke joined the UGS as an industrial minerals geologist in 2010. Prior to that, he worked as a geologist in the lime industry for over 6 years. His work and research at the UGS focus on Utah’s diverse industrial mineral resources, including potash, salt, high calcium limestone, aggregate, gypsum, and others.

Potash refers to natural or manufactured, water-soluble potassium salts, most commonly in the form of potassium chloride (KCl). Potash minerals are primarily used as fertilizer and arevitally important because they provide plants with potassium, oneof three essential plant nutrients along with nitrogen and phosphorous. The chemical industry also consumes potash for production of or use in a number of products, including soap, glass,ceramics, and batteries. The U.S. Geological Survey (USGS) estimates that 37 million metric tons (mt) of potash (reported as K2Oequivalent) were produced in the world in 2011, and 1.1 million mtwere produced in the U.S. Consumption in the U.S. was about6.5 million mt, so the U.S. is currently a net importer of potash.The largest producer of potash in the world is Canada, but Russia,Belarus, Germany, and China also produce significant amounts.

Until 2008 potash prices were relatively stable for a number of years at less than $200 per mt of potassium chloride, but in early2008 prices rose sharply to about $900 per mt. However, duringand following the economic recession of late 2008 and 2009,prices dropped significantly to slightly above $300 per mt. As theeconomy improved, potash prices increased, bringing currentprices back up to over $500 per mt—so prices are not at peaklevels, but are moving in that direction.

Utah is one of only three states in the U.S. that produces potash. Two companies, Intrepid Potash, Inc. (Intrepid) and Great SaltLake Minerals (GSLM), produce potash at three locations in Utah:Great Salt Lake, Wendover, and Moab. At all locations, Utah’s producers use solar evaporation ponds in which brine enriched with potassium is evaporated and concentrated, which leads to precipitation of potash minerals. Those minerals can then be collected,purified, and processed. Utah’s warm, dry climate is well-suited for this efficient use of solar energy.

Intrepid produces potash in the form of potassium chloride from subsurface brines of the Great Salt Lake Desert near Wendover. The Great Salt Lake Desert contains salts precipitated during the late stages of ancient Lake Bonneville, and the precipitated salts (also known as evaporites) enrich the groundwater with potassium. Intrepid extracts the groundwater using trenches and wells and then pumps the water into evaporation ponds. Near Moab, Intrepid produces potash from deeply-buried evaporites found in the Paradox Basin of southeast Utah. In the Paradox Basin, evaporites formed during the Pennsylvanian Period (~300 million years ago) in a restricted marine basin where seawater was concentrated, precipitated salt, and was subsequently diluted multiple times, producing bedded evaporite cycles. Several thousand feet of evaporites precipitated in the basin, and, during the times when the seawater was most concentrated, potash minerals formed and were deposited. At least 29 evaporite cycles have been identified in the Paradox Basin, and 18 of those cycles are known to have potash mineralization—although only a few of the cycles likely have economic significance. Intrepid solution mines two of the potash cycles by pumping water down a well, dissolving the potash minerals at depth, and pumping the potassiumenriched fluid back up another well. The potash is then re-precipitated in surface evaporation ponds and harvested for processing.

Alunite is another potential source of potash in Utah, but it is not currently being exploited. Alunite is a potassium aluminum sulfate mineral (KAl3[SO4]2[OH]6) that can be processed into potassium sulfate and alumina. Although not currently mined in Utah, alunite was historically mined near Marysvale during World War I as a source of potash, and during World War II as a source of alumina. Alunite forms from alteration of volcanic rocks, and a number of deposits can be found in southwest Utah, including the Blawn Wash deposit, which is the largest known alunite deposit in the country. Recently, only Azerbaijan has mined and processed alunite—although primarily for alumina rather than potash.

Due to high potash prices and Utah’s diverse potash resources, expansion of the state’s existing potash production and renewed exploration of the state’s unexploited potash resources are occurring. GSLM has proposed an expansion of its evaporation ponds, primarily in the North Arm of Great Salt Lake, by 69,000 acres which would significantly increase potash production. Currently, GSLM is working through the permitting process for the expansion.

Two companies are currently evaluating Utah’s subsurface brines for potash potential. Mesa Exploration Corp. has acquired 104 square miles of leases and is in the preliminary stages of evaluating the subsurface brine of Pilot Valley, which is just north of Intrepid’s Wendover operation. Also, Peak Minerals Inc. has drilled over 400 mostly shallow exploration holes to evaluate the subsurface brine of Sevier Lake, a playa in Millard County, where it holds leases on over 190 square miles of the lake bed. If sufficient grade and resource are present, both Pilot Valley and Sevier Lake could be amenable to extraction operations similar to the Intrepid Wendover operation. Throughout the Paradox Basin, a number of companies have applied for or obtained resource rights to the bedded evaporites. At least four companies have recently drilled or are planning to drill exploration holes: K2O Utah LLC in the Hatch Point area; Potash Green Utah LLC in Lisbon Valley; Pinnacle Potash International, Ltd. near Crescent Junction; and American Potash LLC south of the town of Green River. Any new mines in the Paradox Basin would likely be solution mines similar to Intrepid’s Moab operation.

Even Utah’s alunite resources are drawing interest; Potash Ridge is evaluating the alunite resource at Blawn Wash in the Wah Wah Mountains of Beaver County. In the 1970s the alunite in Blawn Wash was discovered and defined by Earth Sciences, Inc., and Potash Ridge has recently completed drilling in the area to confirm the previously defined resource.

Potash-related activity is clearly at a high point in Utah’s history. Considering Utah’s current potash production and the diverse nature of Utah’s potential potash resources, Utah is well-situated to play an important role in U.S. production of this important fertilizer. However, as with many industrial minerals, price and demand for potash will need to remain high for new projects to reach production. Production costs for proposed operations will also need to be competitive, as potash may need to be shipped over long distances.