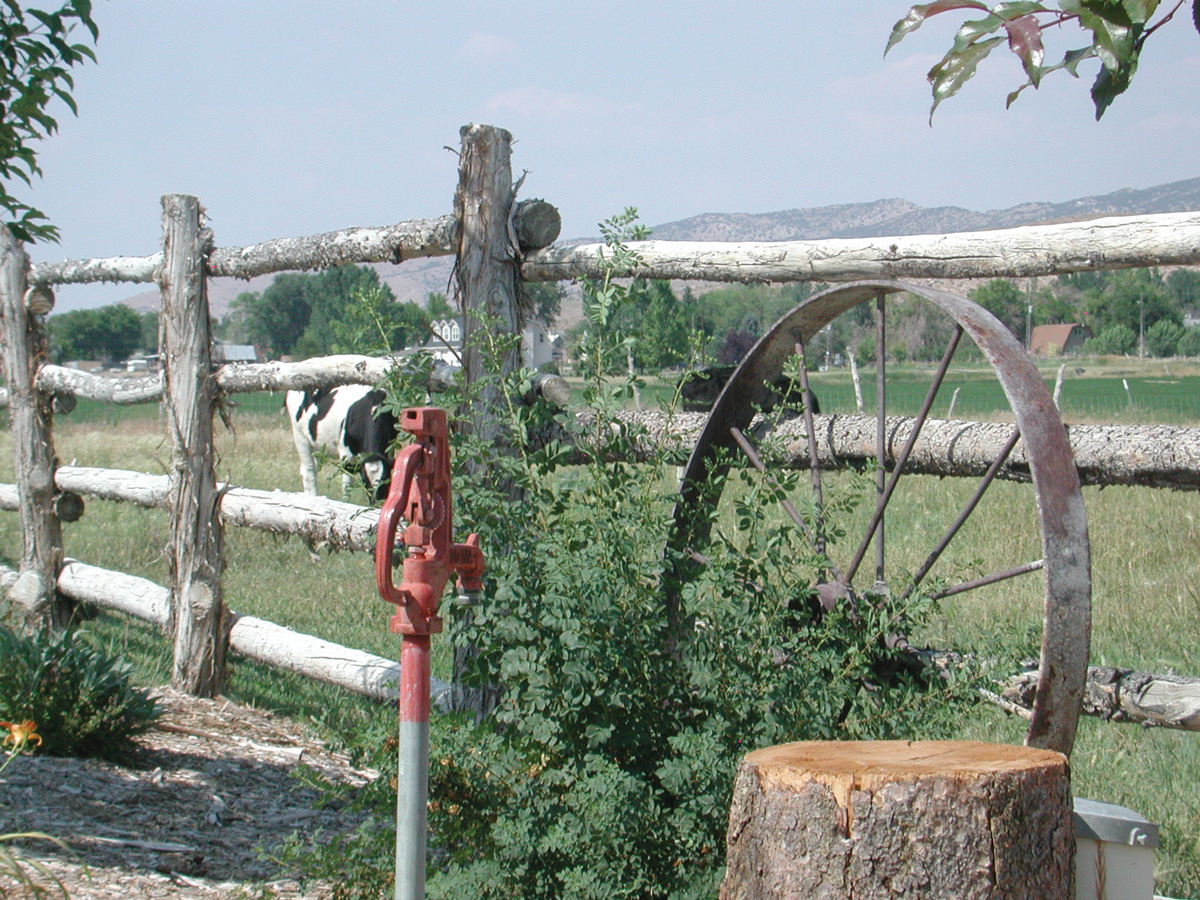 Janae Wallace is a project geologist for the Utah Geological Survey in the Groundwater and Paleontology Program, where she has been employed since 1996. Her principal duties include groundwater quality projects, with an emphasis on aquifer classification, septic-tank density recommendation maps, pesticide sensitivity and vulnerability maps, and water-well cuttings analysis.

She is a co-recipient of the UGS 2003 Arthur L. Crawford Award (for outstanding contributions to Utah’s geology) and the Utah Water Quality Board’s 2008 Calvin K. Sudweeks Water Quality Award (for outstanding contributions in the water-quality field in Utah). She is certified as an onsite system professional and UST ground-water and soil sampler. From 1998 to 2000, she served as Environmental Affairs committee chair for the Utah Geological Association, and has been Scholarship Chair for the Salt Lake Chapter of the Association of Women Geoscientists since 2001.

Many rural areas in Utah rely on ground water from underground aquifers to quench their thirst. Ground water can contain a variety of dissolved chemical constituents derived from both natural and human-related (anthropogenic) sources. We all drink water containing dissolved elements such as calcium, sodium, and magnesium– constituents that occur naturally in ground water– but may not realize the water we drink can also contain constituents such as arsenic or nitrate that, if present in high concentrations, can be a health hazard. If water from a public water supply source contains any constituent that exceeds the U.S. Environmental Protection Agency’s primary drinking water-quality standards and cannot be treated, it is deemed unfit for use.

Nitrate is a nutrient that is considered a health risk when concentrations exceed 10 milligrams per liter (mg/L). High nitrate levels in ground water have been documented in the southern Sanpete County area of central Utah. Reports of relatively high nitrate concentrations in public-supply wells and springs prompted the UGS to evaluate water quality in southern Sanpete and central Sevier Valleys and try to determine the nature of the source of nitrate. State and local government officials are concerned about the impact of nitrate contamination on groundwater resources in this rural area and would like to understand the relationship between geology and water quality so that they can help the growing town of Centerfield site a new public-supply well that will have nitrate concentrations below the 10 mg/L water-quality standard.

Most residential development and agricultural activities in southern Sanpete and central Sevier Valleys are located on unconsolidated valley-fill deposits, which are the principal drinking-water aquifers. The aquifers consist of a mixture of sediments including clay, sand, and gravel. Nitrate in the ground water can be from either natural or anthropogenic sources, although the latter source is typically the main contributor. Natural sources include atmospheric, biologic, and geologic components, and common anthropogenic sources include septic tanks, agricultural fertilizer, and manure from livestock. An engineering consultant’s study recently reported some wells in southern Sanpete County as having high nitrate concentrations attributed to natural “geologic” nitrate from bedrock. One of these wells, having a nitrate concentration exceeding the EPA standard, was drilled (now sealed) for the town of Centerfield in a remote canyon where there is no apparent upgradient anthropogenic source of nitrate. Similarly, a public-supply spring for Centerfield issuing from bedrock (not a common nitrate source) near a mapped fault zone (a possible pathway) has had a relatively high and persistent nitrate concentration since 1984.

So, why does nitrate matter? Under aerobic (high oxygen) conditions, ammonium from septic-tank effluent or animal manure can convert to nitrate, contaminating ground water and posing potential health risks to humans. In infants, nitrate can cause methemoglobinemia, or “blue-baby syndrome,” an illness in which body tissues are deprived of oxygen. Additionally, studies involving lab rats ingesting a combination of nitrate and heptamethyleneimine (a complex organic compound [C7H15N]) in drinking water reported an increase in tumor occurrence. Some epidemiological studies involving humans have shown an increase in stomach cancer associated with nitrate in drinking water. With continued population growth and installation of septic tanks in new developments, or substandard agricultural practices, the potential for nitrate contamination will increase.

Our study assessed water quality in the aquifers of southern Sanpete and central Sevier Valleys to determine likely sources of nitrate pollution and determine the relative age of high-nitrate water from selected sites. The study involved sampling water from 77 sites including wells, springs, and streams, and then analyzing the samples for nutrients (nitrate, nitrite, ammonia, and phosphate). Samples having high nitrate concentration were also analyzed for environmental tracers including tritium, carbon isotopes, chlorofluorocarbons (CFC), and nitrogen and oxygen isotopes in nitrate. Isotopes can be useful tracers of ground-water recharge ages and flow paths, and hence are indicators of the source(s) of waters bearing similar isotopic signatures. Specifically, nitrogen and oxygen isotopes help determine the sources of nitrate (such as fertilizer), and tritium, carbon isotopes, and CFCs help determine the relative age of the ground water.

We can use the age-tracer isotope data to determine how long the water has been in the ground-water system. Ground-water age in the high-nitrate wells varies throughout the area. Tritium analysis indicates that high-nitrate ground water was recharged before, after, and during above-ground nuclear testing of the 1950s when tritium concentrations in the atmosphere were at their low, medium, and peak levels, respectively. CFC data show most high-nitrate wells have an average recharge year of 1976, with an overall range from 1943 to 2000. Carbon isotope groundwater ages range from modern to 19,000 years old, indicating the high-nitrate ground water is from a mix of old and young sources.

Data from nitrogen and oxygen isotopes indicate most high-nitrate wells may have been contaminated by an animal source (including humans), but many could also have nitrate derived from soil nitrogen, ammonia in fertilizer and rain, or a mixture of these. Field investigation confirmed fertilizer and/or animal nitrate as a possible source. Also, septic-tank systems likely contribute nitrate from effluent to many of the samples. Determining whether the nitrate has a geologic source, for example from soil or fault zones, is complex, and requires future work to assess ground-water flow conditions to better estimate the potential for ground-water nitrate loading from these sources. Because the data points fall within overlapping fields on the nitrogen/oxygen isotope plot, we cannot pinpoint an exact sole source of the nitrate.

Based on all of the environmental tracer data, most of the sampled ground water in southern Sanpete and central Sevier Valleys reflects a mixed source. One spring and two shallow wells contain water characterized as modern, seven wells contain water greater than 500 years old but that also has a modern-age component, and thirteen wells and one spring have mixed ground water recharged during the 20th century. Because environmental tracer data show all samples as having a historical recharge component, the major sources of nitrate contamination in ground water are probably from human-related activities rather than from a natural geologic source.

Table of environmental tracer and nitrate data for selected samples