By James I. Kirkland (UGS), Martin Lockley (University of Colorado at Denver), and Andrew R. Milner (City of St. George) 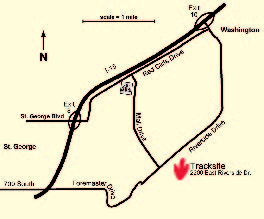 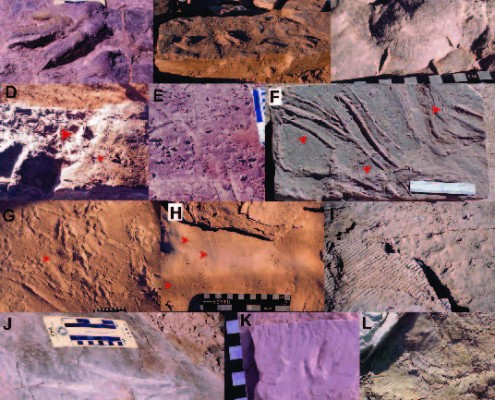 In February 2000, Sheldon Johnson discovered numerous dinosaur tracks preserved at the bottom of a 3-footthick sandstone layer overlying a mudstone layer on his farm within the St. George city limits. As reported in Survey Notes, v. 32, no. 3, because of Johnson’s public-mindedness, scientists from the Utah Geological Survey, University of Utah, and University of Colorado have been able to collect significant data from this important locality in the Whitmore Point Member of the Moenave Formation. Ongoing research has resulted in the identification of a number of different track makers, fossil plants, invertebrates, fossil fish, and beautifully preserved sedimentary structures that record a shallow, saline lake and its margin during Early Jurassic time (about 200 million years ago) in southwestern Utah.

The majority of tracks preserved at the base of the track-bearing sandstone are natural casts of the ichnogenus, or track name, Eubrontes and are from 13 to 18 inches long. These three-toed tracks are thought to represent a dinosaur similar to the crested, meat-eater Dilophosaurus known from the overlying Kayenta Formation. Some of the features are remarkably well preserved and include exquisite examples of the foot pads, claw marks, dew claws, and in one example, detailed skin impressions.

Less common are smaller tracks, 4 to 8 inches long, assigned to the ichnogenus Grallator. These are thought to represent the slender, meat-eating dinosaur Megapnosaurus (prior to 2002 known as Syntarsus) present in both the Moenave Formation and the overlying Kayenta Formation. Invertebrate traces, mudcracks, and diamond-shaped salt casts (trona) are also preserved. Cross-cutting relationships on northeast-directed scour surfaces at the base of the sandstone indicate more than one episode of track-making is preserved at the base of the sandstone. A surface about 4 inches above the base of the sandstone preserves evidence of an algal mat and abundant casts and molds of Grallator.

Reworking of the upper sandstone surface resulted in the deposition of alternating layers of thin sandstone and shale partings that preserve symmetrical and asymmetrical rippled surfaces and many tracks dominated by Grallator. A tiny one-inch dinosaur track and tracks (Batrachopus) of an early crocodilian (possibly representing Protosuchys) have also been recognized. Tracks of possible swimming and running dinosaurs are also preserved. Tracks of Eubrontes are less common on this surface, but include a trackway with a tail drag. Typically tail drags are rarely preserved, as we now understand dinosaurs held their tails off the ground as they walked. As many as six track-bearing surfaces are recognized in this complex sandstone bed.

A very interesting fossil plant similar in form to a water lily was found in the sediment filling a Eubrontes track. This fossil predates flowering plants by 100 million years and probably represents an undescribed plant mimicking the life habit of modern water lilies. Additional fossil plants are found about 20 feet below in exposures of the Dinosaur Canyon Member of the Moenave Formation. These fossils include recognizable conifer (primitive pine relatives) branches with the needles still attached. Some of the plant material is stained green by malachite.

Above the main track-preserving horizon, lake-deposited sediments of the Whitmore Point Member exposed during construction north of the road bordering the Johnson property preserve numerous fossil fish (large semionotids), stromatolites (algal mounds), ostracodes (tiny bivalved crustaceans), and conchostracans (clam shrimps). Together with several horizons preserving mudcracks, these fossils indicate that the lake remained relatively shallow in the St. George area. The sandstone preserving the dinosaur tracks at the Johnson site represents the shoreline area of the lake with salt crystals forming in the sediment on the shore during times of drought.

The St. George Dinosaur Tracksite is the largest attraction in the city with visitation consistently exceeding all other St. George attractions combined and provides an outstanding educational opportunity. Volunteers from the local community and the Utah Friends of Paleontology have assisted the Johnson family and St. George in conducting tours for hundreds of thousands of visitors to the site and have helped document this important new discovery. Donation of the Johnson farm site to the City of St. George has been finalized and plans to preserve and display the tracks on site are moving forward with the help of federal and state funds. This past winter, construction across the road resulted in nearly doubling the known extent of the tracksite and the developer, Darcy Stewart, is investigating donating this site to the City of St. George as well. Utah can look forward to having an important interpretive site for paleontology in the southwestern part of the state in the not too distant future.