By Stefan Kirby and Hugh Hurlow 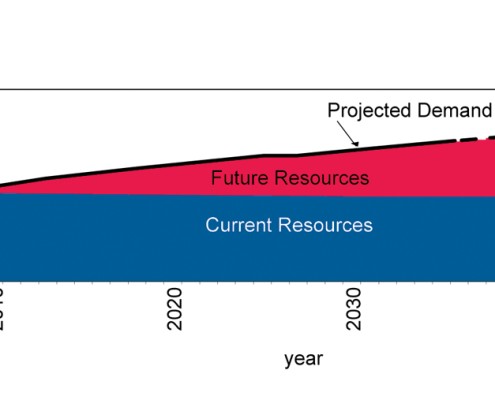 Water demand in the Las Vegas area. To meet projected demand, the Southern Nevada Water Authority must find additional sources of water. SNWA has filed applications on ground-water rights on approximately 180,000 acre-feet per year of in-state ground water. This water would be produced and supplied to the Las Vegas area via a series of interconnected wells and pipelines that would extract water from basins in east-central Nevada. Source: Southern Nevada Water Authority, http://www.snwa.com. 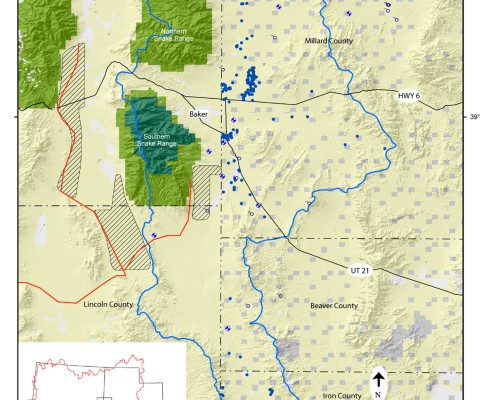 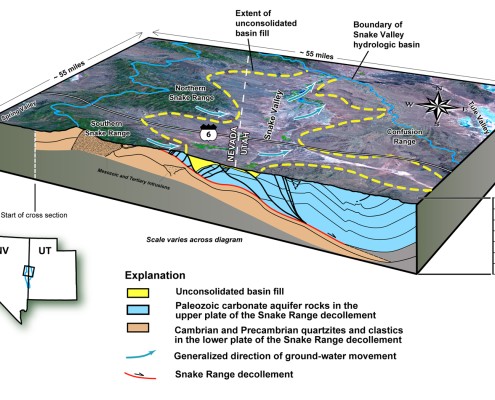 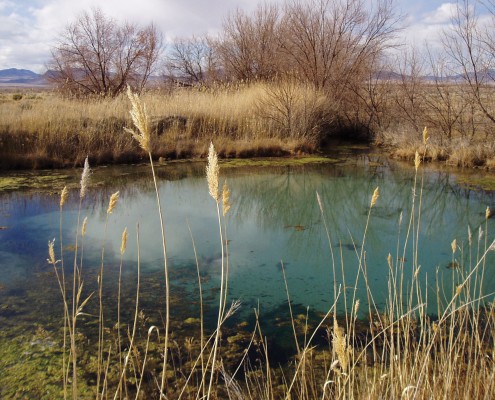 Water is a scarce resource in the Great Basin, which covers large sections of Nevada and Utah, the two driest states in the U.S. Existing surface- and ground-water supplies have met historical needs and allowed both states to grow and prosper, but future growth, particularly in the Las Vegas, Nevada, area, will require water conservation and allocation of additional water resources. One plan of Las Vegas water managers is to extract significant amounts of ground water from east-central Nevada and pipe this water south to augment existing supplies. Snake Valley, in western Millard County, Utah, is hydrologically connected to the proposed wells. Water users and managers in Utah are concerned about the potential impacts, and as a result the Utah Geological Survey is collaborating with federal and state agencies to study the hydrogeologic characteristics of the region.

Water demand in Las Vegas will soon exceed current resources, requiring water managers to look elsewhere for water. To supply part of the future water demand, the Southern Nevada Water Authority (SNWA) has proposed a system of 146 water-supply wells and interconnecting pipelines in south-central and southeastern Nevada to supply up to 180,000 acre-feet of water per year to the Las Vegas area. All of the wells will be located in Nevada, most more than 30 miles from the Utah-Nevada state line. Nine applications, with a total potential withdrawal of approximately 50,000 acre-feet per year, are located along the eastern flank of the southern Snake Range within 5 miles of the state line (application details available from the Nevada Division of Water Resources). The proposed wells are to be completed in the regionally extensive Paleozoic carbonate aquifer, local unconsolidated basin-fill aquifer, and in volcanic rocks. Local and regional characteristics of these aquifers are controlled by a complex geologic history.

Bedrock of Snake Valley and surrounding ranges consists primarily of late Precambrian to early Mesozoic sedimentary rocks up to 33,000 feet thick. Paleozoic-age carbonates dominate the middle and upper parts of the section, and quartzites of Early Cambrian and Precambrian age dominate the lower part of the section. The carbonates form an important aquifer covering much of the eastern and southern Great Basin.

The bedrock was initially deformed during Late Jurassic to early Tertiary time by slip on underlying, east-directed thrust faults of the Sevier fold and thrust belt. Following Sevier crustal shortening, extension and widespread volcanism began during the latest Eocene and early Oligocene. Extension and crustal thinning during the Oligocene through Miocene was accommodated along the Snake Range decollement, a regionally continuous, shallowly east-dipping fault exposed in the Snake Range and imaged in the subsurface by seismic-reflection lines. A later period of extension involving slip on both the low-angle Snake Range decollement and high-angle faults to the north and south occurred in the Miocene; volcanic rocks and coarse-grained basin fill were deposited and regional doming of the Snake Range occurred. The tectonic history of the consolidated rocks has produced complex faulting and fracturing, which may control ground-water movement.

Modern sedimentary basins, filled with sand, gravel, and lesser fine-grained deposits derived from the nearby basinbounding ranges, developed in the late Miocene. The youngest basin-fill deposits form an extensive aquifer beneath the Snake Valley floor and margins.

In the Snake Valley hydrologic basin, recharge of the basinfill and carbonate aquifers occurs primarily locally from surface infiltration and runoff, and secondarily from interbasin flow in the carbonate aquifer. Based on previous work, the southern part of the Snake Range upslope of the proposed well field may supply 40,000 acre-feet per year to aquifers below Snake Valley through surface runoff and direct infiltration in the exposed carbonate rocks, and other recharge may occur via interbasin flow from Spring Valley to the west, another area of proposed SNWA wells. Based on previous studies, most of the recharge of the Snake Valley aquifers likely occurs along mountain-front areas of the Snake Range, and wells proposed by the SNWA would be in or very near these important recharge areas. WHAT IS BEING DONE The Lincoln County Conservation, Recreation, and Development Act of 2004 streamlined establishment of pipeline rights of way and mandated the Environmental Impact Statement (EIS) process necessary for construction of pipelines, pumping stations, and wells. As part of the act, Congress appropriated funding for the Basin and Range Carbonate Aquifer System Study (BARCASS) covering much of the area potentially affected by the proposed SNWA wells and pipelines. The BARCASS study is being conducted by the U.S. Geological Survey (USGS), Desert Research Institute (DRI), and the State of Utah represented by the Division of Water Rights.

BARCASS will characterize water levels and ground-water chemistry; refine estimates of precipitation, evapotranspiration, and recharge; and delineate the subsurface extent and hydrogeologic properties of the basin-fill and carbonate aquifers in Lincoln and White Pine Counties, Nevada, and adjacent areas in Utah. The work includes compilation and synthesis of existing data, sampling of selected wells and springs, and acquisition of geophysical data.

At the request of the Utah Department of Natural Resources administration, the Utah Geological Survey (UGS) is performing geologic and hydrogeologic work to supplement BARCASS, particularly in parts of Utah that will receive little or no attention from BARCASS but may be affected by the proposed pumping. Hugh Hurlow and Stefan Kirby of the UGS are part of a Department of Natural Resources team monitoring the many aspects of the SNWA project, including studies by the SNWA, the U.S. Bureau of Land Management’s EIS process, rulings of the Nevada State Engineer, and BARCASS. Specific UGS tasks include (1) preparing a proposal for 13 new observation wells to provide baseline data on ground-water levels and chemistry prior to installation of the SNWA wells and monitoring changes in these parameters after the wells are in production, (2) compiling a regional geologic map and constructing geologic cross sections and structural-contour maps to delineate the subsurface structure and extent of the carbonate aquifer below Snake Valley and adjacent areas, (3) collecting new gravity data and calculating the thickness of the sedimentary basin fill, in coordination with the USGS, and (4) collecting general chemistry, isotope, and dissolved gas samples from selected wells and springs in Utah thought to be connected to the regional carbonate aquifer.

In summary, the UGS is working cooperatively in Snake Valley and other areas in west-central Utah to address concerns about the long-term viability of ground water shared by Utah and Nevada. Ongoing work by the UGS and BARCASS will better define and monitor ground-water resources beneath Snake Valley and adjoining parts of western Utah, and provide tools to assist in management and allocation of shared ground water now and in the future.

Nevada Office of the State Engineer