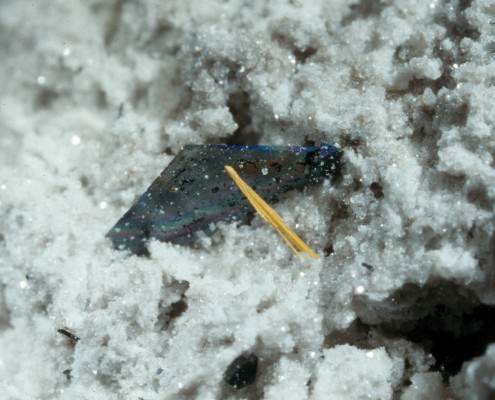 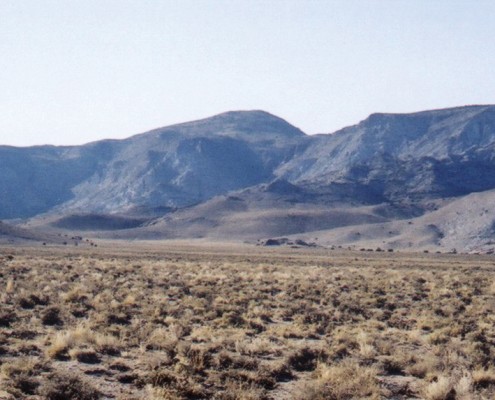 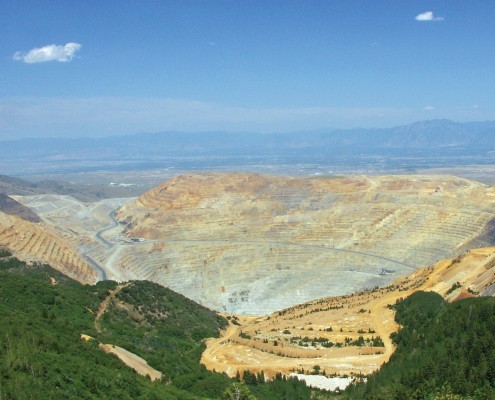 Holfertite is a calcium-uranium-titanium hydrated oxide/hydroxide found at Starvation Canyon and other areas of the Thomas Range, Juab County. The mineral is found as crystals up to several millimeters long, but only a few microns thick. Holfertite is lemon-yellow to orange-yellow with a yellow streak. The mineral has a hardness of 4, density of 2.93 g/cm3, and is radioactive.

Holfertite is found in lithophysae cavities within rhyolite along fracture zones. The mineral is associated with hematite, sanidine, quartz, calcite, topaz, and red beryl. Holfertite is named for John Holfert, a geologist and mineral dealer who specializes in minerals from the Thomas Range.

Nukundamite is a rare copper iron sulfide found at the Bingham mine in the West Mountain (Bingham) mining district, Salt Lake County. However, it was first identified at the Undu mine (the type locality) in Nukundamu, Fiji, hence the name.

At the Bingham mine, the mineral is disseminated or fine grained and is impossible to tell apart from bornite in a hand sample. Nukundamite is brownish-purple with a dark-gray streak. The mineral has a hardness of 3.5 and a density of 4.3 g/cm3. At the Bingham mine, Nukundamite is found in the quartzite unit of the Pennsylvanian Bingham Mine Formation. The mineral is associated with bornite, chalcopyrite, quartz, covellite, digenite, pyrite, and enargite.