By James I. Kirkland and Donald D. DeBlieux 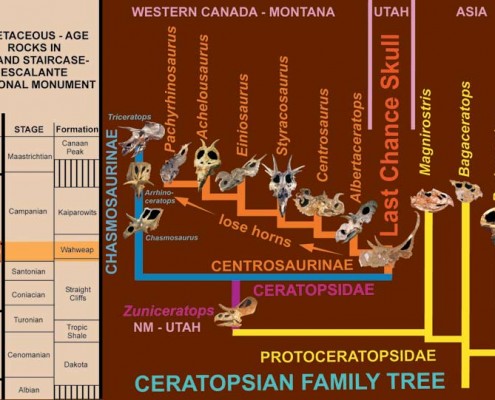 Hypothesized ceratopsian family tree plotted against a linear time scale in millions of years ago (MYA) and Cretaceous rocks in Grand Staircase-Escalante National Monument. Note that frill is not preserved on skull of Magnirostris. Francois Gohier provided many of the ceratopsian skull photographs.

The Utah Geological Survey has been funded by the Bureau of Land Management to conduct paleontological site inventories in the lower Campanian (84–80 million years ago) Wahweap Formation in Grand Staircase-Escalante National Monument. Our work has resulted in the discovery of two undescribed species of ceratopsid (horned) dinosaurs. The ceratopsid family of dinosaurs is restricted to western North America and is best known from the latest Cretaceous (75–65 million years ago) as typified by the well-known Triceratops. They are quadrapedal plant-eating dinosaurs characterized by narrow beaks, large facial horns, and large, variously ornamented frills of bone extending off the back of their skulls. They are derived from the generally hornless and simply frilled protoceratopsids known from Asia and North America from 110–65 million years ago. The transition from protoceratopsids to ceratopsids is shown by Zuniceratops from New Mexico and Utah (92 million years ago), which has two horns above the eyes, no horn on the nose, and a simple frill. The ceratopsids are in turn divided into two subfamilies: the chasmosaurines with longer skull, large horns over eyes, and moderately ornamented frills; and centrosaurines with short, deep skulls, large nasal horns (lost in later taxa), and highly ornate frills.

The collection of the first partial skull from Nipple Butte was reported in Survey Notes (v. 33, no. 1) in 2001. It was collected from low in the Wahweap Formation on the south side of the Wahweap outcrop belt. Unfortunately, although a new species, the skull was not complete enough to distinguish it from other similar skulls because the frill at the back of the skull was not completely preserved. Frills exhibit many critical features used to distinguish the various species of horned dinosaurs from each other—a useful fact for both other ceratopsians and paleontologists. However, the skull was complete enough to establish this specimen as the first centrosaurine discovered that has large horns over its eyes. Thus, it provided a link between the centrosaurines and the more primitive Zuniceratops.

In 2002, co-author Don DeBlieux discovered a skull weathering out of sandstone near the middle of the Wahweap Formation near Last Chance Creek on the east side of the Wahweap outcrop belt. Collection of bone on the surface and cleaning of the block revealed a nearly complete skull lying on its left side; part of the right side had eroded away, with much of the skull still imbedded in the rock. We spent eight days using a gas-powered cutoff saw to separate the block containing the skull from the surrounding ledge. Finally, in September 2005, the block was transported by helicopter to a truck waiting on a nearby road and driven to the UGS preparation lab in Salt Lake City. Since then, more than 700 hours of preparation has exposed a beautifully preserved skull with all the features needed to fully characterize this new dinosaur.

The Last Chance skull is the oldest, and the first diagnosable, centrosaurine recovered south of Montana. The skull is about one meter (3 ft) long from the beak to the back of the frill, where a pair of curved spines add another 0.5 meter (1.5 ft) to the total length. The front of the skull is shorter and deeper than other centrosaurines, and is unique in bearing two low horns in a line above the large nasal opening. The erect horns over the eyes are 25 cm (10 in) long and extend over the nasal horns. Of all known centrosaurines, the Last Chance skull is unusual in having large blade-like spines extending laterally from its cheeks and a frill that narrows away from the skull toward the spines. With the many low spines along the sides of the frill, this new ceratopsid would have been impressive in life with 24 horn-covered spines of various sizes sticking out from the skull.

The long horns over the eyes and small nasal horn are primitive characters as indicated by the ceratopsid sister taxon Zuniceratops. Additionally, in all other centrosaurines (including the Nipple Butte skull) and in all chasmosaurines, the lower bone making up the frill (squamosal) expands laterally so there is a notch between the back of the skull and frill that housed the external ear. In the Last Chance skull, Zuniceratops, and the protoceratopsids, the notch (perhaps to protect the ear) is not developed. Taken together, these observations indicate that the Last Chance ceratopsian is the most primitive of all the known centrosaurines.

A final feature of considerable importance is the presence of an extra hole in the side of the skull behind the nasal opening. This opening is not present in the more advanced centrosaurines and chasmosaurines, but is present in Zuniceratops and two closely related species of protoceratopsids: Bagaceratops and the larger Magnirostris. Magnirostris also possesses tiny horns over its eyes. Thus, the Last Chance ceratopsian, together with Zuniceratops, provides substantial evidence that among all the known Asian protoceratopsians, Magnirostris is the closest relative of the large horned ceratopsids of North America.