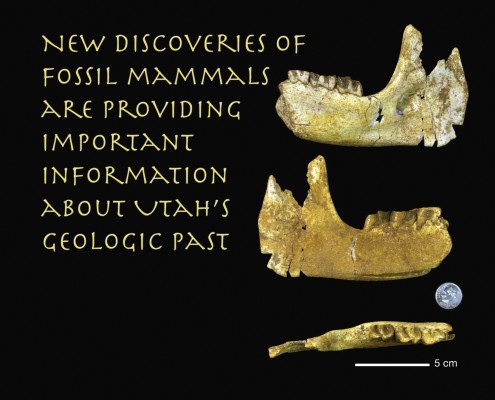 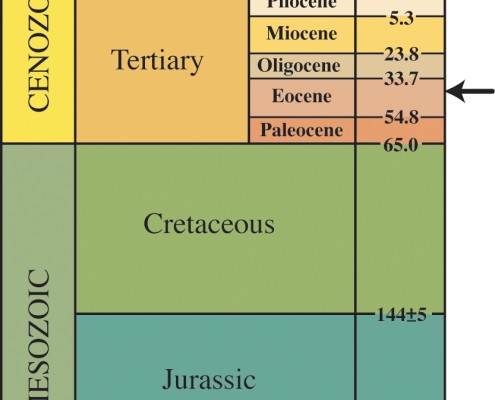 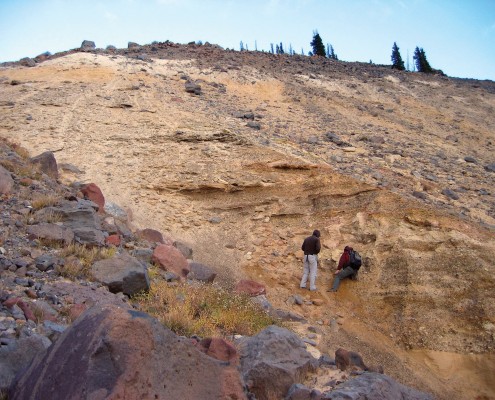 When one thinks of vertebrate paleontology in Utah the first animals that typically come to mind are dinosaurs. Utah is justifiably famous for its many dinosaur fossils found in rocks of the Mesozoic Era (known as the Age of Dinosaurs). However, Utah has also played an important role in deciphering the evolutionary history of the group of animals to which we belong – mammals. Though mammals became prominent during the Cenozoic Era, they actually appear in the rock record with the first dinosaurs late in the Triassic Period. Utah has many early mammal fossils and has been a magnet for researchers interested in the study of these small mammals that shared their world with the dinosaurs. Other researchers have focused on the many fossil mammals found in Utah’s Cenozoic-age rocks.

Following the extinction of the dinosaurs 65 million years ago, mammals proliferated to fill the ecological void. The Uinta Basin of northeastern Utah preserves an important record of this diversification, especially in the Uinta Formation that dates from the middle Eocene Epoch (49-37 million years ago). Research on the Uinta Formation over the past 130 years has revealed a varied assemblage of fossil mammals, including early members of groups that are still with us today such as horses, rhinoceroses, tapirs, carnivores, rodents, and primates. Also found are members of extinct groups such as the large rhino-like uintatheres and brontotheres. The study of fossil mammals from the Uinta and other western basins led to the recognition that distinctly different mammals lived during successive time periods. The importance of this finding was formally recognized by the naming of a number of “land mammal ages” for these basins. For example, the fossil mammals from the Uinta Basin are the basis for the Uintan Land Mammal Age (LMA), and fossils from the overlying Duchesne River Formation, also found in the Uinta Basin, are the basis for the Duchesnean LMA.

A new discovery by UGS mapping geologists illustrates how the study of fossil mammals is not only interesting in its own right but can provide valuable geologic information. While working on the Thousand Lakes Plateau north of Capitol Reef National Park in Wayne County, Bob Biek, Paul Kuehne, and Grant Willis were investigating a rock unit of unknown age. This rock is composed of sand and gravel and lies below volcanic rocks dated as early Oligocene (beginning approximately 34 million years ago). Based on this, they knew that the rock unit is older than Oligocene, but could possibly be as old as Late Cretaceous. That covers a period of over 30 million years! They found no datable rocks within this unit to allow them to determine its age more precisely. However, a small landslide had exposed a fresh area of this rock. While examining the rock, Bob Biek noticed a small piece of bone, which he later showed me. It was covered in sand and gravel and didn’t look like much of anything, but as I looked more closely I realized from its shape that it was part of a mandible (lower jaw). On closer inspection, I saw a small bit of tooth enamel, which confirmed that it was indeed part of a mandible. The mapping geologists had scored nicely; just like in police forensics, dental remains are the most useful parts of a fossil mammal. Jaws with teeth are one of the few parts of the body that can be identified to species. The jaw had been abraded by flowing water and sediment but preserved three molar teeth. I could tell that the jaw was from a perissodactyl, the group that includes modern-day horses, rhinoceroses, and tapirs. Soon after its discovery, I was able to show it to many of the world’s fossil perissodactyl experts while attending the Society of Vertebrate Paleontology meetings in Arizona. They helped to identify it as belonging to a small extinct rhinoceros named Teletaceras. This animal has been found in western North America and Asia, and is thought to be one of the first members of the family that contains the living rhinoceroses. Teletaceras is known only in rocks of the Duchesnean LMA, so we can greatly narrow down the age of the rocks that the geologists were mapping to approximately 42-37 million years old. This provides important data regarding the Eocene history of central Utah and will aid our mapping geologists in their work. It is also a significant paleontological discovery since this is the first time this animal has been found in Utah.