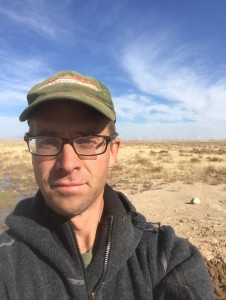 Stefan Kirby joined the UGS in 2004 and is a Senior Geologist in the Groundwater Program.  He has worked on a wide range of projects that include basin-scale groundwater studies, geologic mapping, oil and gas produced water, and various aspects of geothermal investigations.

The Utah Frontier Observatory for Research in Geothermal Energy (FORGE) project is a U.S. Department of Energy-funded geothermal energy research project aimed to design and test new techniques for stimulation and development of geothermal resources in hot crystalline rocks (see Survey Notes, v. 48, no. 3).  These types of rocks (which include granite and various types of metamorphic rock) contain vast amounts of heat at depth throughout Utah and the U.S.  Making use of this heat, for power generation or direct heating, has proven difficult because these rocks generally do not produce useable quantities of water to wells.

The FORGE project aims to exploit these hot rocks by stimulating (fracturing) them and improving their ability to yield water to wells.  For Utah, and particularly Beaver and Millard Counties, the FORGE project is an opportunity to tap into vast new energy and economic resources stored as heat in the earth’s crust.  The Utah Geological Survey is an important part of the FORGE project team, and work thus far has included characterization of the groundwater near the Utah FORGE site.

The Utah FORGE site is in Utah’s arid west desert, eight miles northeast of Milford, near the Beaver-Millard County line.  Groundwater in this part of Utah is the primary source for agriculture and drinking water.  The FORGE project will also use this groundwater for various phases of drilling, completion, stimulation, and circulation testing.  Because the groundwater is important to the local community and agricultural economy and as a supply for the FORGE project, understanding the conditions and chemistry of the groundwater is imperative.

A plume of thermal water having high total dissolved solids (TDS) concentration emanates from the north end of the Opal Mound fault and Roosevelt Hot Springs.  This plume broadly defines the area of thermal outflow in which TDS concentrations decrease to the west, north, and south as the plume disperses in the unconsolidated basin-fill aquifer across the FORGE deep drill site. The ratio of chloride to boron (Cl/B) in groundwater beneath the FORGE site, which is uniformly ~100, also indicates the water originates from the active geothermal system at Roosevelt Hot Springs.  As TDS decreases due to dilution from east to west, the groundwater Cl/B value remains consistent. The Cl/B ratio rises to 200–700 on the periphery of the outflow plume as the geothermal outflow mixes with cool basinal groundwater.  TDS in groundwater beneath and adjoining the FORGE site ranges from 4000 to 6000 mg/L, exceeding the U.S. Environmental Protection Agency’s primary and secondary drinking water standard.

Therefore, potential use of groundwater in this area for drinking water and agriculture is limited.  However, the groundwater is suitable and accessible for use in the FORGE project, and this use will have little impact on agricultural and drinking water used in the valley around Milford.