What are seismic surveys and how much “shaking” do they create?

Two-dimensional seismic section across a sedimentary basin located under Great Salt Lake west of Antelope Island. After data collection, images are processed by computers and interpreted by geologists or geophysicists. 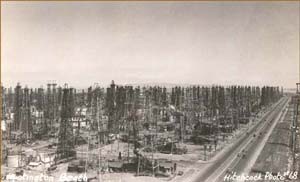 Like Superman, geologists have X-ray vision – well, sort of. Seismic surveys use reflected sound waves to produce a “CAT scan” of the Earth’s subsurface.

Seismic surveys can help locate ground water, are used to investigate locations for landfills, and characterize how an area will shake during an earthquake, but they are primarily used for oil and gas exploration.

Early “wildcatters” found oil by drilling natural oil seeps and large folds (anticlines) in exposed rocks. These “easy” oil prospects were all quickly discovered and drilled, and geologists turned to seismic surveys to find less obvious oil and gas traps. Seismic technology had been used since the early 1900s to measure water depths and detect icebergs, and by 1924, crude seismic data were first used in the discovery of a Texas oil field.

Seismic images are produced by generating, recording, and analyzing sound waves that travel through the Earth (such waves are also called seismic waves). Explosives or vibrating plates generate the waves and a line or grid of geophones records them.

Density changes between rock or soil layers reflect the waves back to the surface, and how quickly and strongly the waves are reflected back indicates what lies below.

The amount of shaking associated with different seismic surveys varies, depending on site-specific factors such as soil and rock type, how deep the survey needs to image, and the required source. A steel plate struck with a sledgehammer generates enough energy for shallow (less than 60 feet) soil investigations used for engineering or environmental surveys.

Dynamite charges are commonly buried in 50- to 100-footdeep holes (called shot holes). Relatively small amounts of explosives are used in shot holes. For example, the petroleum industry’s Stone Cabin 3D seismic survey scheduled for this summer near Nine Mile Canyon in Carbon County will use 10 and 20 pounds of explosives in shot holes. In comparison, 30 pounds might be used for a large construction-site blast and 2,000 to 4,000 pounds for a medium-sized quarry or mine blast. With any of these detonations, if you are at the source you will feel the ground move. However, because the charge is smaller and deeply buried for seismic surveys, you probably would feel only a small pulse up to a few hundred feet away, and beyond that you are not likely to feel anything at all.

Vibroseis trucks and buggies come in a variety of designs and sizes, but all of them generally release less energy than is generated from shot holes. All have a large pad that is lowered from the vehicle to the surface and then vibrated to generate seismic waves. In an urban environment, vibroseis-generated waves are less than background noise generated by buses, trucks, and trains (repeated signals are used in order to be distinguishable from background noise). At its source you can feel a vibroseis shake the ground but as you move away your ears will hear the airborne sound waves much longer than your feet can feel those in the ground.