Is There Coral in Great Salt Lake? 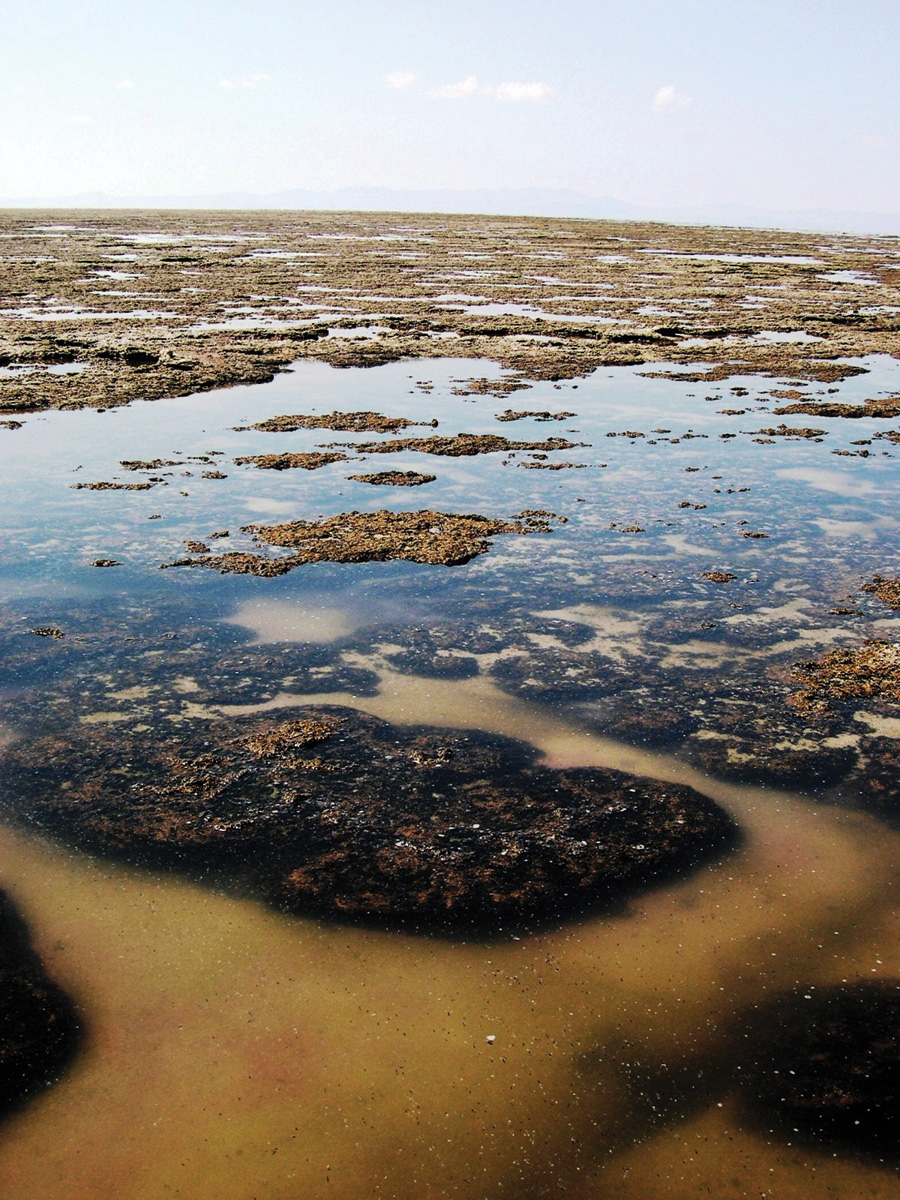 A stromatolite reef emerges from Great Salt Lake near Hat Island in September, 2007, when lake levels were nearly five feet below the average of 4200 feet. Photo by Jim Van Leeuwen, courtesy of the Utah Division of Wildlife Resources, Great Salt Lake Ecosystem Program. 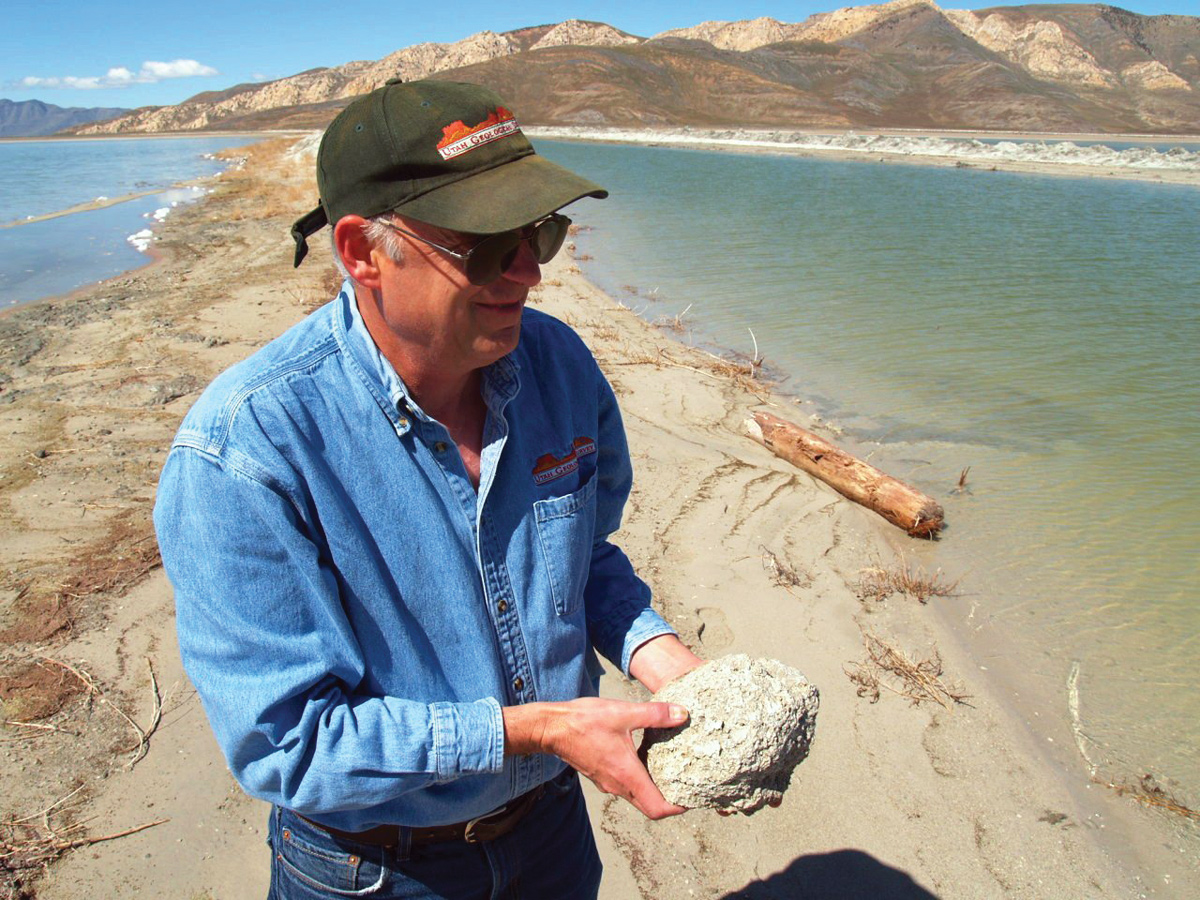 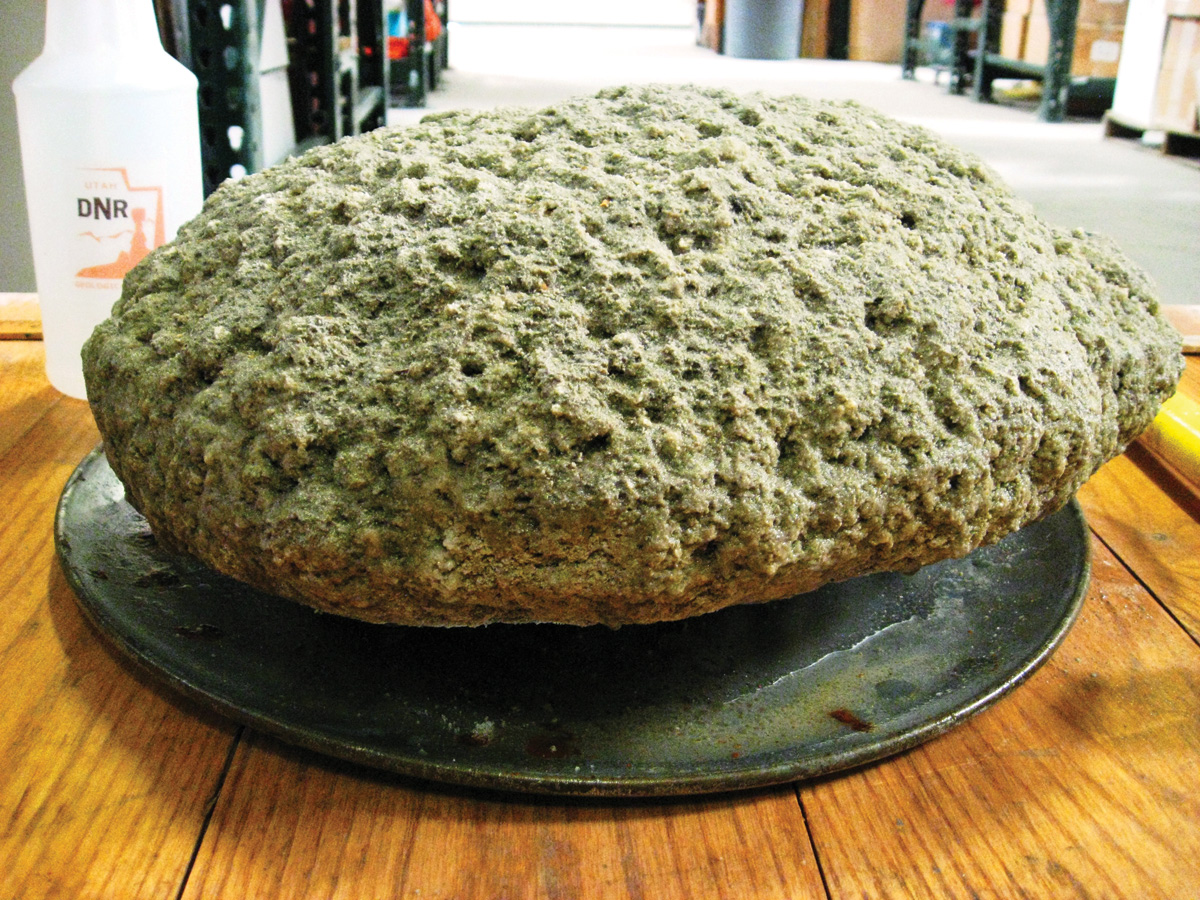 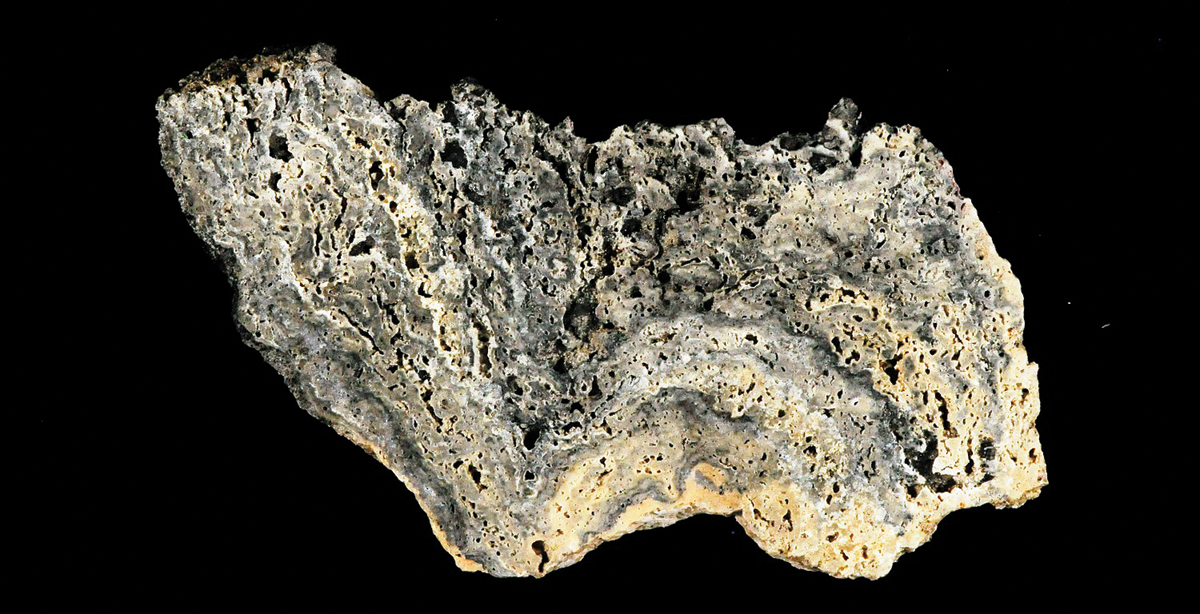 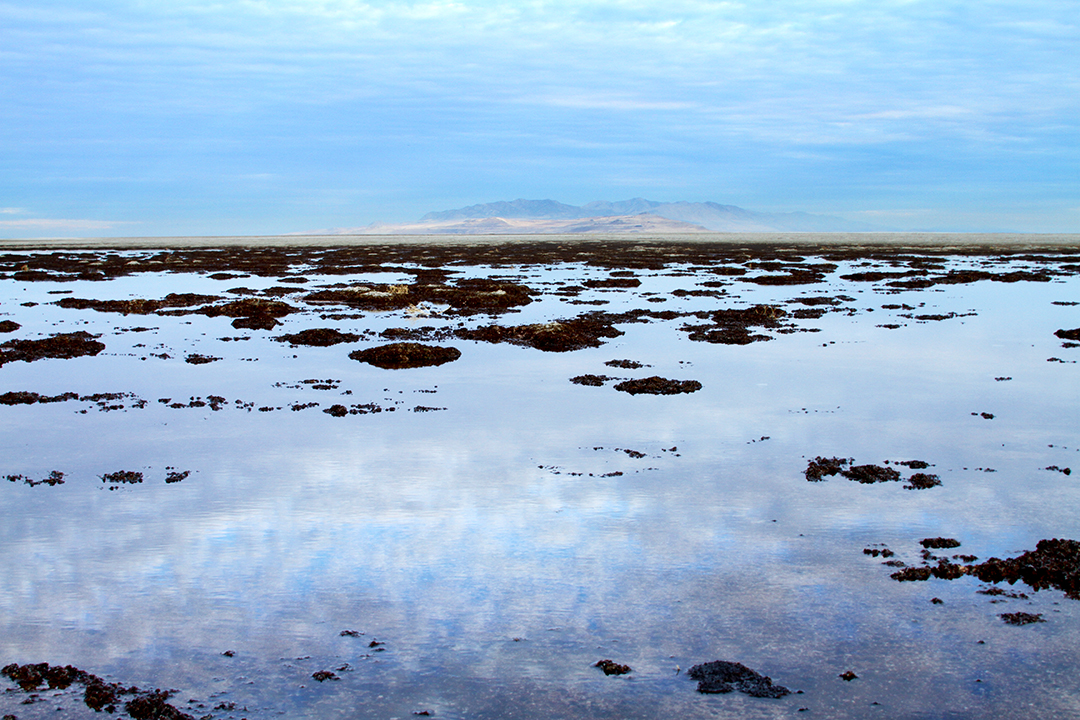 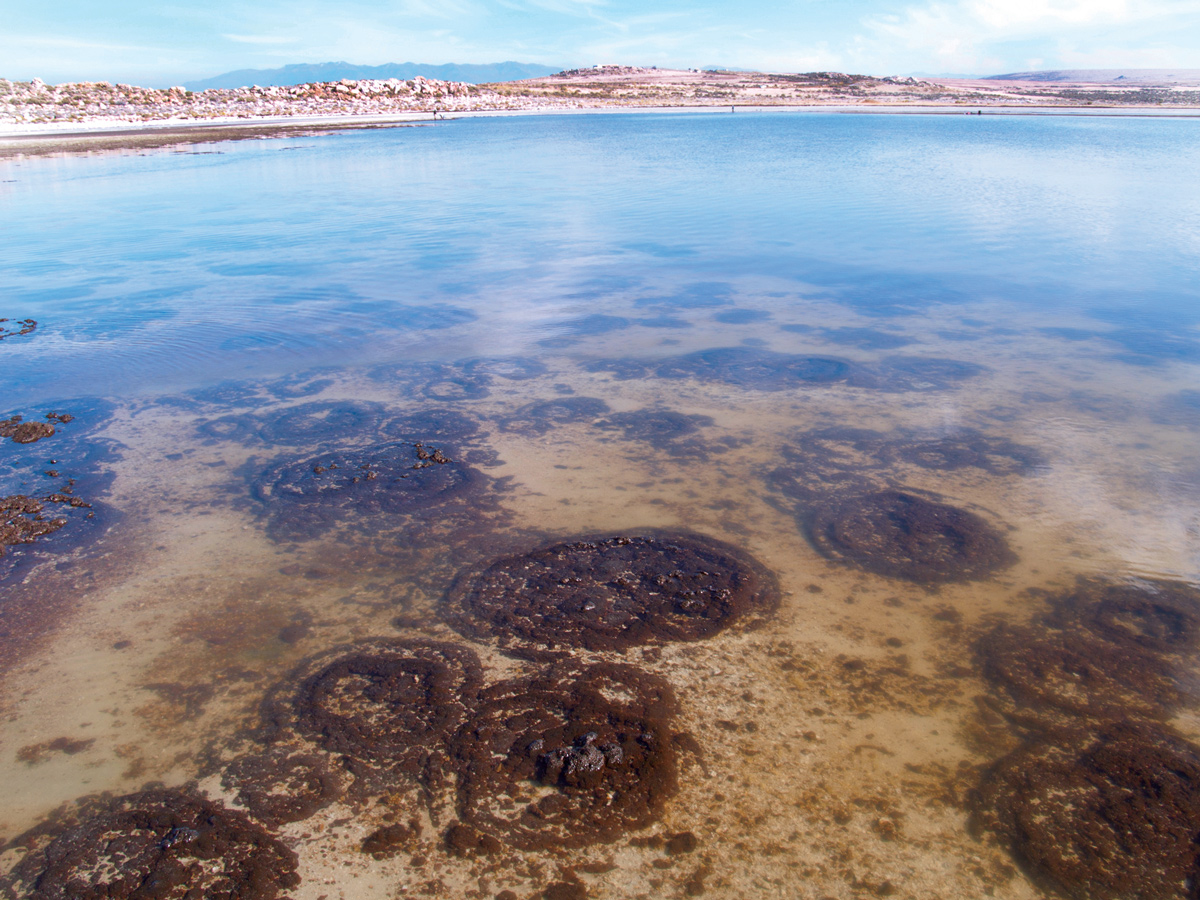 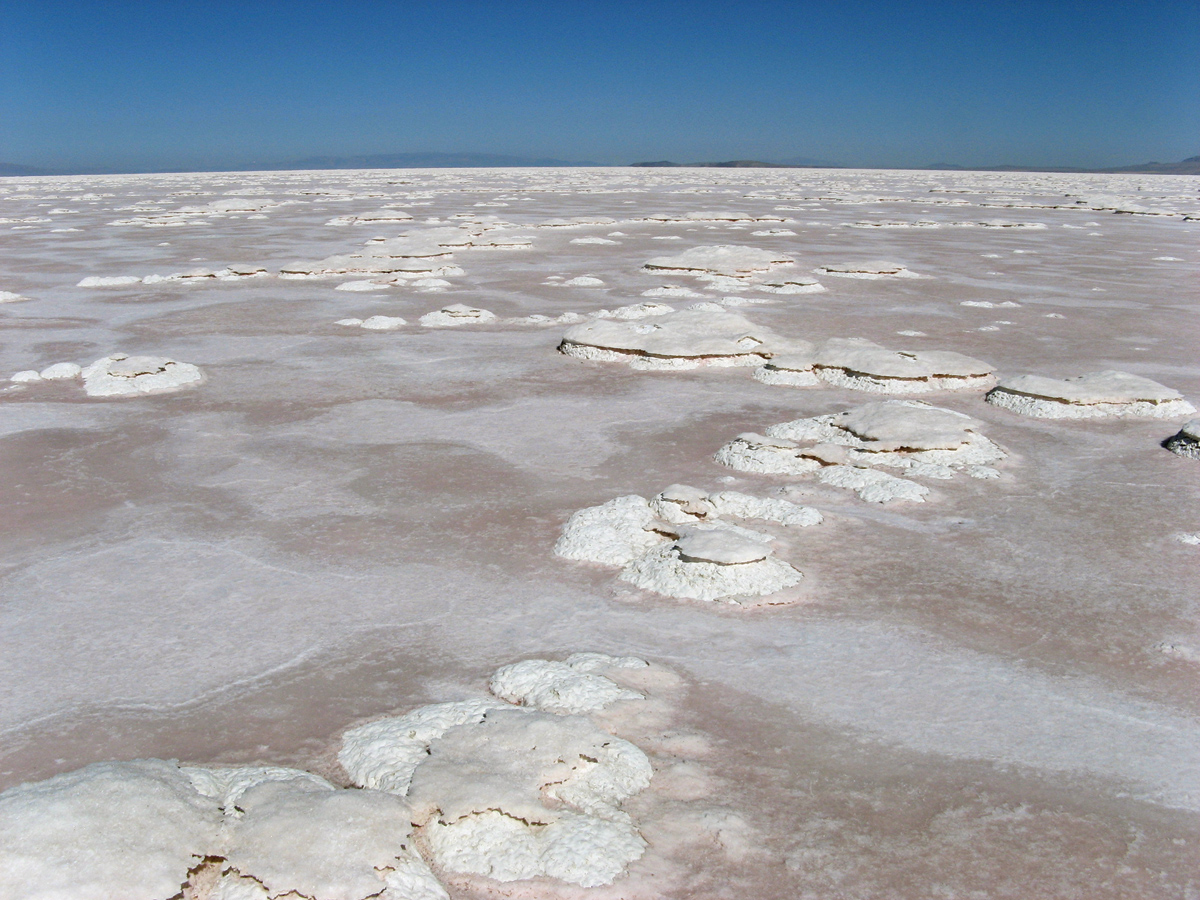 Great Salt Lake has reef-like structures that resemble coral and are often called coral, yet they are not true coral. While true coral is an animal, Great Salt Lake “coral” is blue-green algae (cyanobacteria). These algae build bulbous sedimentary rock structures known by various names: algal bioherms and stromatolites are two of the most common.

Stromatolites, which are among the oldest fossil evidence of life on Earth, dominated the shallow seas for billions of years. Still forming today, stromatolites (pronounced strō · MAT · o · lites) are limited to a few locations around the world that are inhospitable to other organisms that might otherwise outcompete or consume them. These locations are typically shallow, warm, hypersaline waters such as closed-basin lakes where there is no outflow, warm springs, or restricted marine embayments.

Stromatolites are composed of limestone (calcium carbonate) and dolomite (calcium magnesium carbonate). Other types of stromatolites, depending on the organisms that create them and the environment in which they live, can be rich in silica, iron, or manganese. Although various algae are cited worldwide as contributors to stromatolite formation, the dominant algae in Great Salt Lake is a cyanobacteria of the genus Aphanothece.

Great Salt Lake is ideal for stromatolites, and is home to some of the most extensive reefs of living stromatolites on Earth. The lake’s briny environment precludes organisms that would ordinarily graze or browse on nutritious stromatolites or burrow and bore into them. Additionally, a lack of animals minimizes stirring of sediments from the lake bed that would otherwise blanket stromatolites from sunlight. The absence of plants and scarcity of other algae on the lake floor also reduce competition for nutrients and space.

Most Great Salt Lake stromatolites are broad, circular, and domal in shape, measuring around one to three feet across and four to eight inches high. The largest was measured at 12 feet in diameter and 3.5 feet tall. Because stromatolites are photosynthetic, their distribution is limited to shallow, sunlit waters of which Great Salt Lake possesses vast tracts adjacent to its shoreline and numerous islands. They are most observable when lake level is near average (4200 feet) or lower and after planktonic algae have been grazed out by brine shrimp, making the water more transparent.

Stromatolites grow by accretion from chemical precipitates, particularly calcium carbonate, and by the inclusion of sediments that settle out of the water column. Great Salt Lake provides plenty of calcium carbonate because it is a closedbasin lake that concentrates elements through evaporation, and the lake has considerable areas of calcium-laden limestone and dolomite in its drainage basin.

The process of stromatolite formation begins with mat-like accumulations of gelatinous, mucous-covered filamentous strands of algae—proficient trappers of sediment. Metabolism of algae and other microorganisms, such as bacterial decomposers, along with water agitation and temperature fluctuations, drive carbon dioxide out of the water. Removal of carbon dioxide raises the pH, which triggers the precipitation of calcium carbonate. The calcium carbonate is then integrated with the algal mats and cements the sediments. These physical and biological processes work to enlarge the stromatolite in laminar fashion—the rock grows in fine-banded layers.

Since the 2006 discovery of a substantial oil play off the coast of Brazil, stromatolites have created a buzz in the petroleum industry. In the Brazilian play, petroleum occupies the voids within the porous, stromatolitic rock formed in an ancient lake at the time Africa and South America were beginning to break apart, some 150 million years ago. Geologists are looking to modern Great Salt Lake stromatolites as an analogy for the ancient ones that now hold oil. One of the largest oil fields in the Uinta Basin, so far producing nearly a million barrels of oil, is sourced from an ancient reef of stromatolites that resided in a large lake.