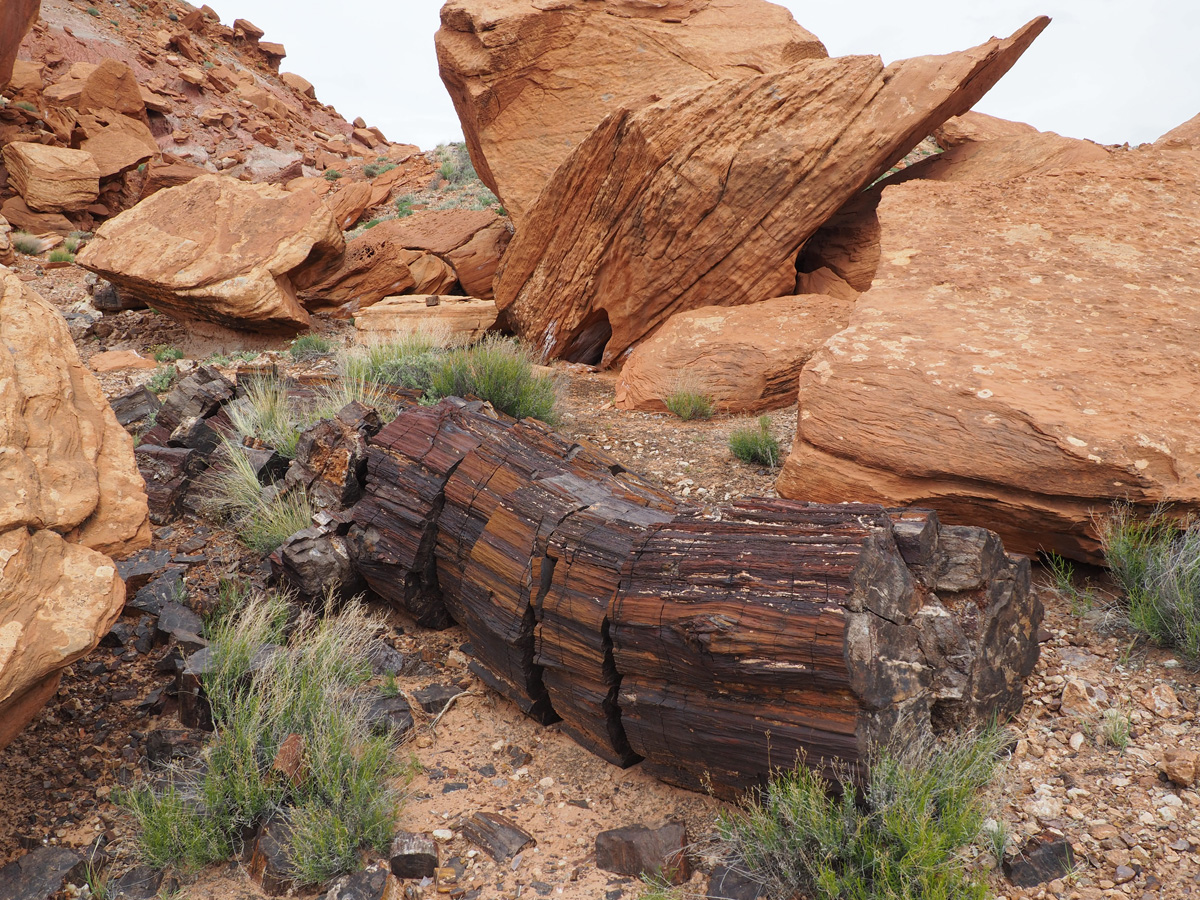 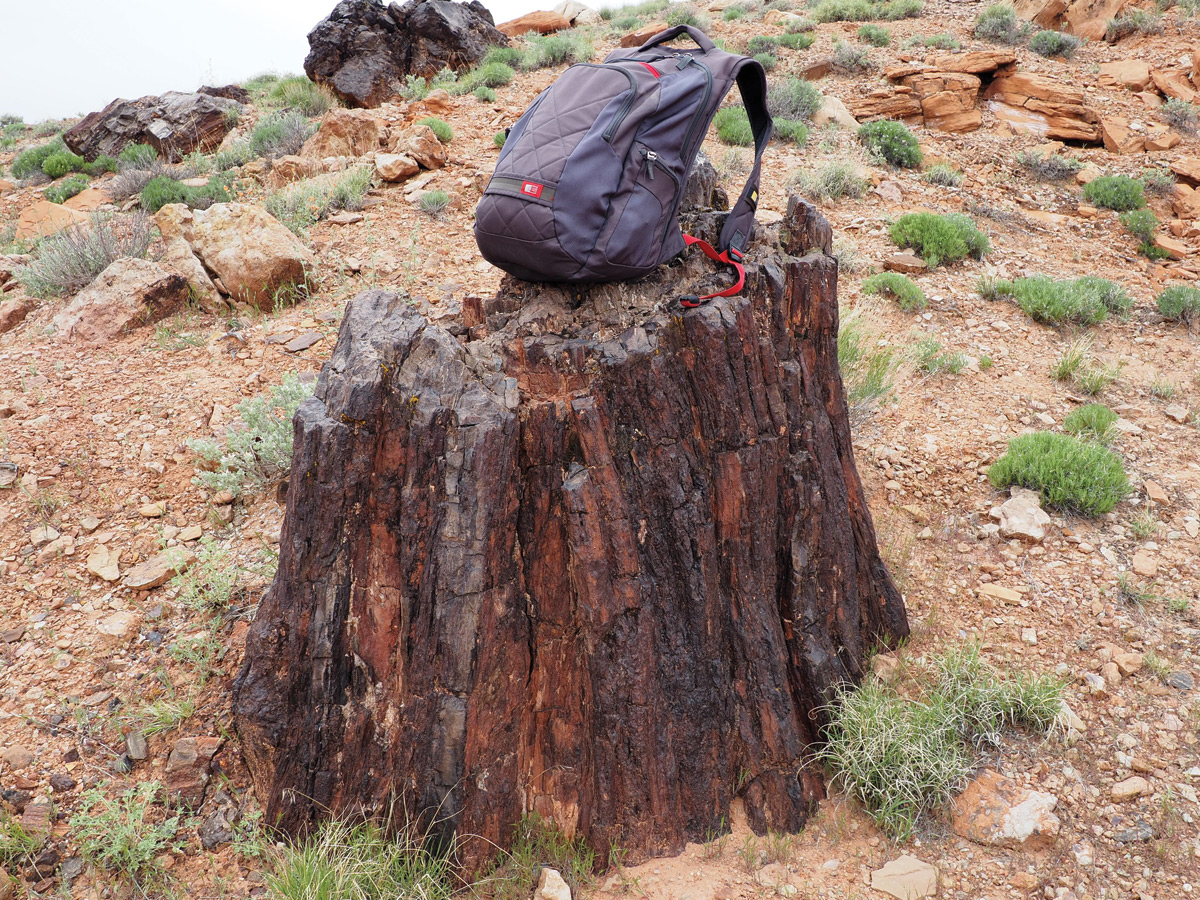 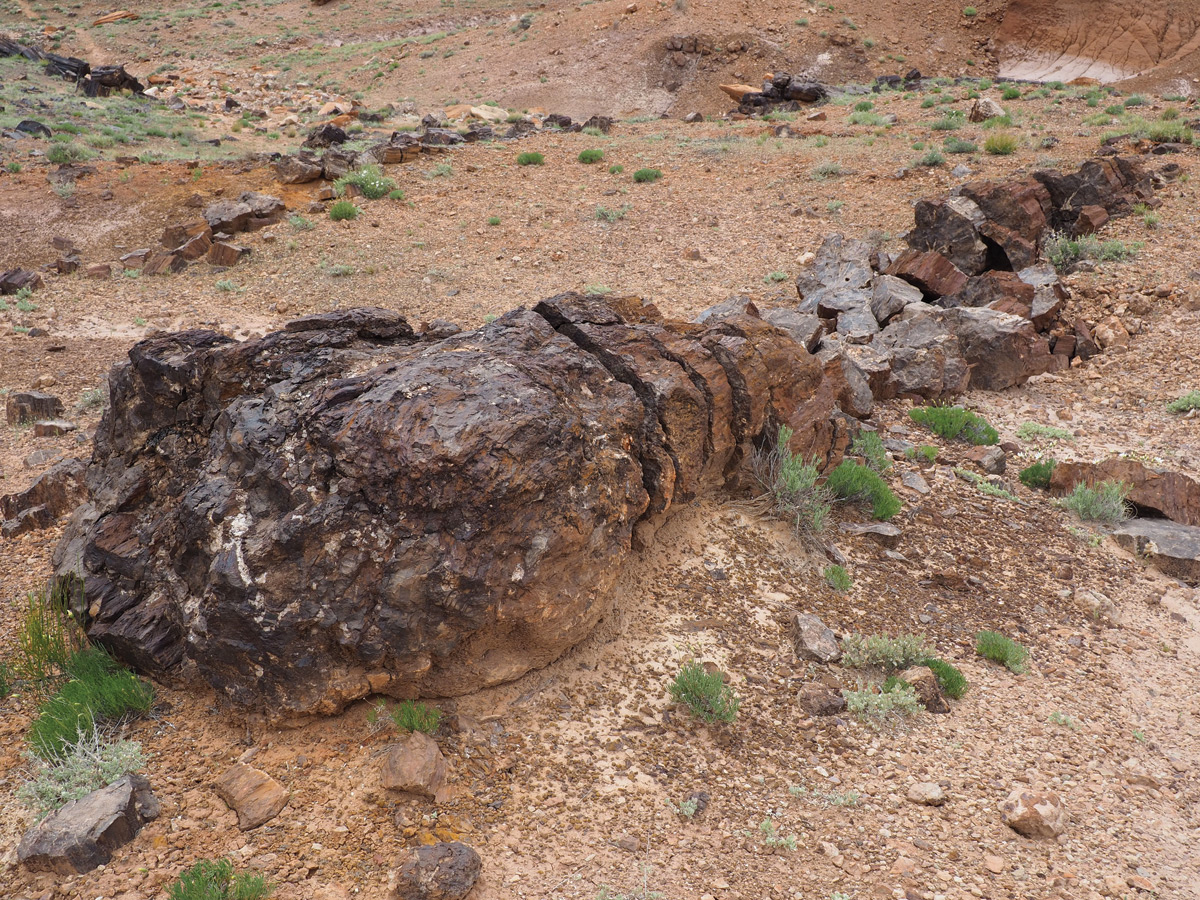 Remember, it is illegal to remove the petrified wood from Wolverine Petrified Forest.

Nestled off the beaten path south of the Burr Trail between Boulder and Capitol Reef National Park, Wolverine Petrified Forest provides an awesome display of petrified wood. Don’t expect to find a flourishing forest of towering trees though, as this forest hasn’t been standing for millions of years. A sizable number of petrified wood-chunks are scattered among the rocks, but one area in particular has an impressive collection of in-place petrified wood.

Tempting as it may be, don’t walk off with anything you find here though, as the area lies within Grand Staircase–Escalante National Monument (GSENM), which makes it illegal to collect rocks of any kind.

So, why is there so much petrified wood here? There isn’t a tree for miles, especially one that resembles the petrified wood found here. Around 225 million years ago, during the Triassic Period, Utah was much closer to the equator and coastline, and the climate was also much warmer. At this point in Utah’s ancient history, the topography was much flatter, so the waterways were sluggish, yet prevalent due to the rain-saturated, volcanic mountains to the south. Northwest-flowing rivers and streams transported nutrient-rich volcanic ash and soil throughout Utah, and blanketed the surrounding plains as they flooded often.

Large conifer trees grew in this fertile soil, but ironically, the same mountains that provided these lush tree-growing conditions probably led to their demise as well. Violent eruptions of ash overwhelmed the region and its waterways with too much silica, killing the trees, and subsequently burying them in the surrounding ash-laden mud and water that protected and preserved them for later discovery.

These prehistoric conditions are evident in the petrified wood-rich mudstone layers known today as the Petrified Forest Member of the Chinle Formation. In addition to an abundance of petrified wood, this 150- to 300-foot-thick layer of rock is found sporadically throughout the Colorado Plateau and is distinguished by its dull-pink layers, “popcorn” weathering texture, and resemblance to badlands. At Wolverine Petrified Forest, the highest concentration of petrified wood is contained within an approximately 10- to 30-footthick deposit. This rock layer is easily erodible and forms an easily-distinguishable slope beneath the brown-red cliffs of the Wingate Sandstone.

What is Petrified Wood?

Petrified wood is the result of trees being buried by either sediment or water, and cut off from the decomposition processes found in oxygen-rich conditions. While buried for millions of years, the organic tissues and voids in the wood are replaced by quartz via a process called permineralization. Unlike trace or compression fossils that are merely impressions of the original organism, petrified wood’s original plant structure remains preserved, allowing observers in the present day to see what the wood looked like millions of years ago.

Where is the good stuff?

There’s no need to hike very far from the trailhead to start finding petrified wood as it can be found scattered along the trail; however, the best in-place petrified wood is just under a mile from the trailhead. The walk isn’t strenuous, but be prepared with plenty of water, sturdy shoes, a hat, sunscreen, and first aid kit. There is also no cellphone service in the area, so make sure to let someone else know your plans (a signal mirror may help in emergencies as well). If you stay on the main trail, you’ll see gorgeous scenery, but miss out on seeing the full tree trunks, stumps, and branches of petrified wood.

At roughly the ¾-mile-mark (there is no actual marker), begin looking to your right (north) for dark black rocks. There are a few locations where petrified wood is preserved as a stump in the ground, and other locations where the wood is laid out on the ground just as it fell 225 million years ago, half-buried by the dirt and rock surrounding it. The best and most intact pieces are tens of feet long, upwards of 3 feet in diameter, and are found at the following coordinates: latitude 37.7979611017° N, longitude 111.2200917° W and latitude 37.797071° N, longitude 111.220973° W.

Remember, it is illegal to remove the petrified wood.

Travel eastbound on the Burr Trail for 18.4 miles and turn right (south) onto Wolverine Loop Road (also known as Bureau of Land Management [BLM] Road 110). Pavement ends at this junction, so please continue with caution for 10 miles along the sometimes washboarded dirt road, across numerous washes (try to plan around dry weather), and turn right into the parking lot for the Wolverine Petrified Forest (a sign for Wolverine Petrified Wood Natural Environmental Area marks the entrance).

Note: Wolverine Loop Road (BLM 110) is generally impassible during and shortly after wet weather conditions and crosses numerous washes that can be subject to flash floods. Please research weather and road conditions when planning a trip. A helpful website that provides road conditions for Grand Staircase–Escalante National Monument is http://ow.ly/SCYRH.